The North and the Liberal regime 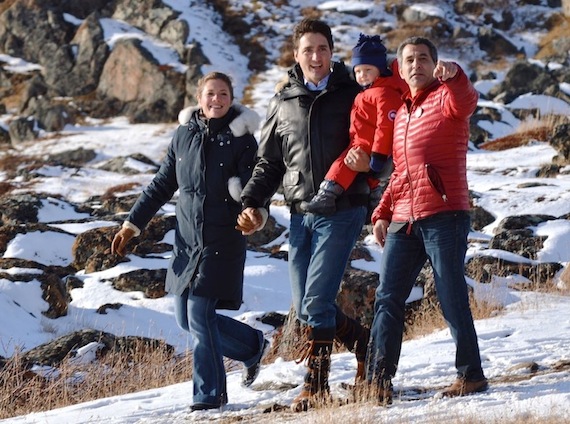 On Oct. 19, the Conservative Party of Canada’s dominance in northern Canada collapsed, blown away like a scrap of waste paper in a stiff breeze.

Northern Canadians, dependent as ever on federal government spending, will now turn hopefully to Prime Minister Justin Trudeau’s triumphant Liberals, whose government was sworn in Nov. 4.

Numerous Nunavut office holders, board members and business people are probably professing a newly discovered affection for the Liberal party already. Those with known ties to the Conservatives will be updating their resumés.

In any case, Trudeau and Tootoo each come to power in the face of public expectations that, given the realities of government and politics, are now higher than either politician can possibly fulfill.

But the Liberal party’s platform commitments, while short on detail, are clear enough. And it should be possible to predict what they’ll do in the short term and how that might affect the people of Nunavut and Nunavik.

The first is a big one: Trudeau’s promise to spend $125 billion across Canada over 10 years in three infrastructure categories: public transit, social infrastructure and green infrastructure. That’s roughly double what the Conservatives planned to spend on infrastructure in the same period. Does this mean more social housing? Water and sewage treatment plants? Arenas? Power plant replacements?

That’s because we don’t know — right now — how the Trudeau government will distribute that money among territories and provinces.

If the Trudeau government uses a purely per capita formula — based on population — to allocate those funds, Nunavut and other sparsely populated regions may end up with less than they need.

But two Nunavut projects — promised by the Conservatives — are likely to go ahead. One is a deep-sea port at Iqaluit, to be financed with $63.7 million from Ottawa and $22.1 million from the Government of Nunavut. The other is a $40-million small-craft harbor at Pond Inlet.

Tootoo and his Liberal party promised this past August they’ll move ahead on those two projects — and you can count on it. It’s inconceivable they would now go back on their word.

It’s also highly likely that other Conservative projects — such as the Canadian High Arctic Research Station, the naval docking station at Nanisivik, the Arctic patrol vessels, and the icebreaker John G. Diefenbaker — will be completed under the Liberals.

In Nunavik, the biggest infrastructure demand is for a big catch-up social housing construction program. The defeated Liberal candidate in Abitibi-James Bay-Nunavik-Eeyou, Pierre Dufour, said the federal government has a role to play in building social housing.

But don’t hold your breath. Beyond that, there’s no concrete promise to build more social housing in Nunavik.

One promise the Liberals will keep is to launch a national inquiry into missing and murdered indigenous women. The MMIW tag, however, is a bit of a misnomer. What its passionate advocates really seek is an inquiry into plausible allegations of racism, sexism and negligence in the handling of violent crimes committed against First Nations women, especially in western Canada.

But Pauktuutit, the national Inuit women’s organization has made it clear, on many occasions, that their first priority is different: to obtain federal money, immediately, for battered women’s shelters in the Arctic.

Though they don’t oppose a national MMIW inquiry, Pauktuutit is concerned the needs of Inuit — who comprise only five per cent of Canada’s Aboriginal population — could get ignored in a national inquiry dominated by First Nations concerns.

As Nunavut’s MP, Tootoo should therefore ensure these legitimate Inuit reservations are reflected in the national inquiry’s design, funding and terms of reference.

On the much-vilified Nutrition North Canada program, the Liberals will likely keep their promise to increase its funding by $10 million a year over four years.

But that, by itself, may have little or no impact on food prices in Nunavut and Nunavik, especially if the extra money is used to extend NNC to First Nations ice-road communities that are now not eligible.

Because of the declining value of the Canadian dollar, food prices, especially imported food products, are rising anyway. Get ready to pay more. On the other hand, their promise to increase the value of the Northern Residents Deduction, while insufficient, is more likely to help northern residents cope with the rising cost of living.

On climate change mitigation, Liberal rhetoric stands in stark contrast to that of the Conservatives. But their policy may not be so different. The Liberals reject “arbitrary targets” and suggest they’ll let provinces and territories set their own greenhouse gas reduction targets.

This means Nunavut won’t likely have to set its own price on carbon. Given that Nunavut’s energy costs are already astronomical, that’s not such a bad thing — in the short term. The flexibility of the Liberal approach may give Premier Peter Taptuna a chance to join Trudeau’s “pan-Canadian framework for combatting climate change” without having to do very much.

This may be Nunavut’s best approach for now. But in the long term, Taptuna’s government should find ways of using Trudeau’s $2 billion Low Carbon Economy Trust to restart efforts to replace diesel with hydro, and continue work on a plan to connect the Kivalliq region to Manitoba’s hydroelectric grid.

Last, on implementing the recommendations of the Truth and Reconciliation Commission, Nunavut’s priorities should be two-fold: more money for mental health and healing, and more money for Inuit language development, including support for the Inuit Broadcasting Corp., APTN, and other producers of Inuit language cultural products. JB