“It is truly exciting to be launching this new initiative” 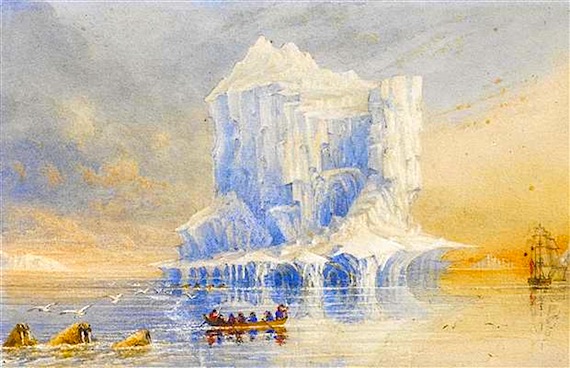 The image of an enormous iceberg towering above the expedition ship HMS Terror and one of its rowboats was painted by George Back, who captained the vessel during a trouble-plagued voyage to Hudson Bay in 1836. (FILE IMAGE) 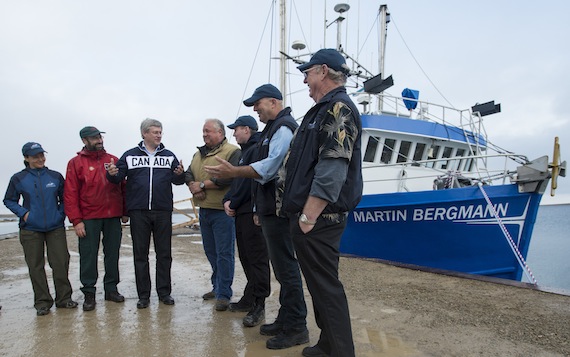 Prime Minister Stephen Harper chats with Captain Carrey Collinge and the crew of the Martin Bergmann research vessel prior to boarding the ship Aug. 22 in Cambridge Bay. (PHOTO COURTESY OF THE PMO)

After a visit Aug. 22 with crew aboard the new research vessel Martin Bergmann, now docked in Cambridge Bay, Prime Minister Stephen Harper announced a new project to continue the search for the ill-fated 1845-46 Franklin Expedition vessels, the HMS Erebus and HMS Terror.

“It is truly exciting to be launching this new initiative to continue searching for the lost vessels of the Franklin Expedition. It is also a privilege to meet with members representing the extraordinary array of Canadian partners and researchers who hope to solve the mystery of the ill-fated HMS Erebus and HMS Terror and unlock the rich history of Canada’s Northwest Passage – a history that unites us all as Canadians,” Harper said.

“The use of cutting-edge technology by the team to map the Arctic waters and locate the Franklin vessels is also a tribute to Canadian expertise.”

The Erebus and Terror, then under the command of Royal Navy commander John Franklin, became stuck in the ice in September 1846.

Franklin died on June 11, 1847, with the ships still immobilized.

Then, in April 1848, the rest of his crew abandoned the ships, intending to march over land and frozen water to mainland Canada, but they perished en route.

Led by Parks Canada, the 2012 Franklin Expedition will, with the help of a number of public and private sector partners, including universities, continue to search for the two historic vessels in the Victoria Strait and Alexandra Strait region, where one of the vessels is thought to have foundered, and the southern region near O’Reilly Island, west of the Adelaide Peninsula.

That’s where Inuit oral tradition says one of the wrecks is located.

The search efforts, which will take between four to six weeks, will also contribute to collecting scientific data to increase knowledge of the Arctic in a number of areas, a news release said.

These include the collection of data for the production of navigational charts and topographical maps in the Arctic and support for marine archaeology and ecosystem management.

During the visit, Harper also announced the signing of a Memorandum of Understanding with the Government of Nunavut that establishes a framework for the ongoing cooperation and coordination of the research, search and preservation activities regarding the Erebus and the Terror.

The GN is the permitting authority for all archaeology research conducted in Nunavut and will lead the land-based archaeological search, the news release said.