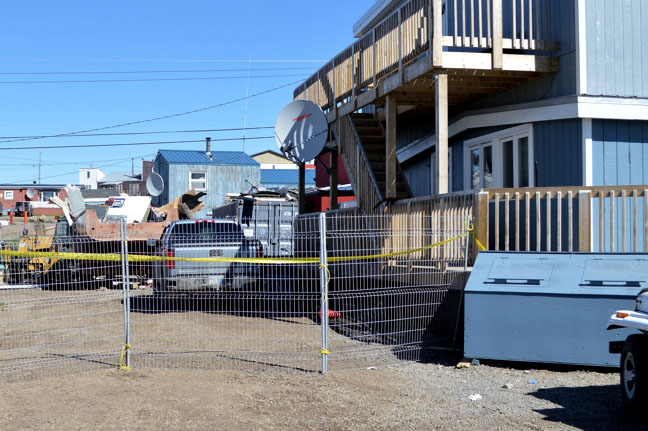 A 53-year-old woman is accused of break-and-enter with intent to commit a theft after about 25 carvings were stolen from the house on the right, the residence of the late John Manning, who died July 9 after an explosion on his boat. (FILE PHOTO)

An Iqaluit woman accused of stealing carvings from the home of a man who died from injuries sustained in a recent boat explosion, made her first appearance Aug. 24 before a judge at the Nunavut Court of Justice in Iqaluit.

Christine Ammaq, 53, faces one charge of breaking and entering to commit theft, and is alleged to have forced her way into the home of the late John Manning in Iqaluit’s Lower Base neighborhood on July 8 and made off with about 25 carvings.

Manning, 57, along with 50-year-old Noel Priddle, were killed after the boat they were working on in Manning’s driveway exploded on July 6.

Priddle died shortly after the explosion while Manning died of his injuries three days later, in an Ottawa hospital, on July 9—a day after his home was robbed.

Family members were out of town and at his bedside at the time of the break-in and theft. They only noticed the break-in when they returned to Iqaluit, after Manning had died.

Another man was severely injured in the boat explosion, but did not die from his injuries.

Ammaq, who had been released on a promise to appear in court, was present in the courtroom and nodded to Justice of the Peace Nicole Sikma that she understood the charges.

Crown lawyer Barry McLaren told the court that his office was still awaiting disclosure of evidence from the Iqaluit RCMP.

Sikma adjourned the matter until Sept. 11 to allow lawyers time to receive disclosure.