This Nunavut man could be Canada’s Greatest Know-It-All 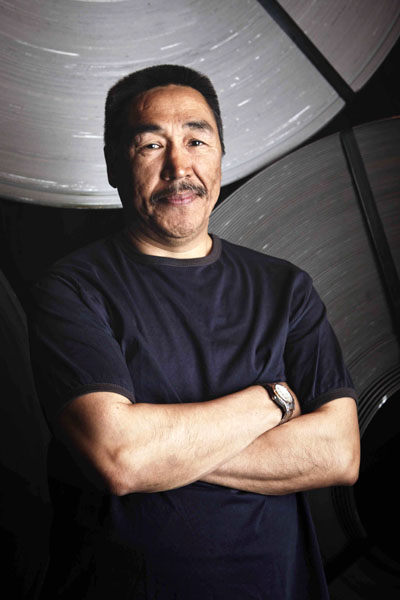 Abe Qammaniq of Hall Beach is a smart man. Starting this Jan. 14, when the second season of Canada’s Greatest Know-It-All starts up on the Discovery Channel, Qammaniq will compete with nine other contestants to find out just how smart he is. (PHOTO COURTESY OF DISCOVERY CHANNEL)

But on Jan. 14, they’ll get a chance to cheer on one of their own when the second season of Canada’s Greatest Know-It-All airs on the Discovery Channel.

Abe Qammaniq, a 51-year-old government liaison officer, will be the only Nunavummiutaq amongst the 10 contestants. He was a big fan of the series — a Canadian original —during its premier season, which aired earlier this year.

The show features a series of physical and mental challenges designed to test the contestants’ “brains and brawn.”

Qammaniq liked the show’s “combination of knowledge and skills.”

What’s more, he knew he’d make an awesome contender. And so when he saw the show was accepting applications for next season, he figured why not?

“From what I’ve seen in the first season, it was an adventure, like you get to do all this wonderful stuff [that] you don’t get opportunities to do,” he said.

Qammaniq sent in an application form and the next day he got a phone call. A rep for the show asked a handful of questions, presumably designed to test his knowledge range.

They asked him how many Prime Ministers Canada has had and what their names are. In the next breath, they asked him to explain how a refrigerator works.

Qammaniq was well equipped to answer. The trivia aficionado and media junkie has worked in housing maintenance and trained in carpentry.

He does a lot of interpretation work for the government. And he said the 20-plus years he’s served as a Canadian Ranger also came in handy.

“I learned a good amount from them… military ranks and their chain of command… the very standardized operating procedures like systematically approaching problems or how to run your group.”

He says his parents had a similar knack for remembering facts.

“Traditionally, as Inuit, there was no written form of anything so it was all in their head.”

While he says he didn’t go far in school, the study habits he developed there have been hard to shake.

“When I got out of school I just sort of continued to keep my eyes and ears open, basically my senses, see how things work,” he said.

Skills and knowledge aside, Qammaniq may just have won producers over with his warm laugh.

They asked him to come down for the month-long shoot, which happened in June.

The show was shot in various locations throughout Ontario. Luckily, Qammaniq had vacation time banked.

“It was like a paid vacation for me,” he said.

A paid vacation that he’ll finally be able to talk about in January.

Given the nature of reality TV, participants aren’t really allowed to talk about the outcome of a show before it airs.

Qammaniq says the confidentiality agreement he had to sign required heavy lifting.

“There were I don’t know how many pages I had to print, read, understand and abide by,” he said with a good-natured laugh.

Despite all the paperwork, Qammaniq says he’d do it again in a second – not for the fame or the money, but for the adventure.

“When opportunity knocks, answer it! They’re few and far between out this way… “

He certainly won’t let the fame – fleeting or not – go to his head.

“In a small town like this… I’m just another person off the street. I do my thing.”