This Saturday, Iqaluit celebrates all colours of the rainbow 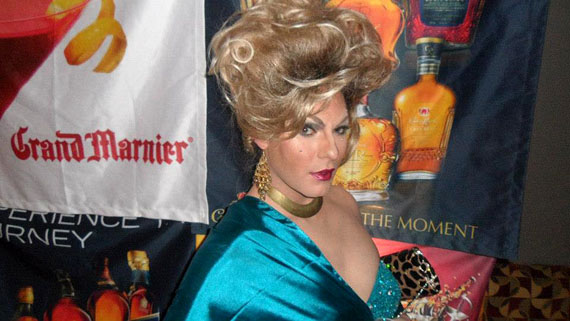 The dark days of winter are knocking on Iqaluit’s doors, but the bright colours of the rainbow will be partying inside, keeping winter at bay — at least for one night.

The first annual Iqaluit Pride Party, an event to celebrate inclusivity and support for diversity of gender and sexual identity, will take place Sept. 27 at the francophone centre.

Doors open at 6 p.m., performances start at 7 p.m. followed by a DJ dance party at 9 p.m. Admission is free but donations are encouraged to cover costs and organize future events.

Vinnie Karetak will act as master of ceremonies, while Zsa Zsa LaWhore and lead organizer Michelle Zakrison will co-host the event.

Zakrison, originally from Ontario, started planning the event four months ago when she moved to Iqaluit from Victoria, she told Nunatsiaq News Sept. 21.

But before arriving in Iqaluit, which Zakrison wants to make her long-term home, she spent four years, on and off, researching Iqaluit’s lesbian, gay, transgender and queer, or LGBTQ, scene and reached out to Iqalungmiut already engaged in LGBTQ activism.

“I got the impression that people were really itching for an event like this,” Zakrison said.

Gerry Delaney, the creator and performer behind Zsa Zsa LaWhore, told Nunatsiaq News that in his seven years in Iqaluit, there haven’t really been any pride events to attend.

“It takes a certain kind of person with the right gumption to get things going, to get things rolling, and that’s what Michelle has come to provide,” he said.

Delaney has been performing in drag for about five years and although he’s performed at a number of charity events in St. John’s, Nfld. — his original home — this will be his first performance in Iqaluit.

“I’ve been gauging to see how people here would react to it, but it seems like now or never to find out,” he said.

Delaney described his drag persona, based on celebrity Zsa Zsa Gabor, as a glamour queen with a bit of a clown aspect.

“When it comes to drag… it’s for the entertainment of others. You want people to enjoy themselves, get them riled up, so it’s about the showmanship,” Delaney said.

“When you have a seven-foot-tall man in a dress on the stage, that helps get things moving.”

Zakrison got things moving when she created a social media presence for Iqaluit Pride: the group has more than 100 followers on Twitter already, and the Facebook page for the Sept. 27 event says more than 100 people plan to attend.

Zakrison has gained the support of a number of local businesses, including Freedom Hair, The Gallery Restaurant, Water’s Edge, Iqaluit Cable, I Like Cake and Northern Collectables.

I Like Cake will donate a rainbow cake for the event while Bryan Hellwig of Northern Collectables has donated a sculpture valued at $300 as a door prize.

“I think the rainbow flag being raised by city hall this year was a big step forward,” Zakrison said.

The flag was raised at the request of Coun. Kenny Bell in February and caused some controversy when Coun. Simon Nattaq told council that some of his constituents had told him “it’s not an Inuit custom to be gay”.

Zakrison sent an email to Towtongie to invite her to Iqaluit Pride but, by press time, had not received a reply.

But the controversy strengthens Zakrison’s resolve to focus on her next priority: to reach out to Iqaluit youth on LGBTQ issues.

“If you’re 11 or 12 and you’re like, oh, why don’t I like girls, or vice versa? That must be tough, especially if you’re facing other obstacles,” she said.

“And there’s gay youth who are being told by certain leaders that being gay is not Inuk.”

A goal for the future is to create gay-straight alliances in high schools, she said.

Iqaluit Pride’s first annual event is for those 19 and older because alcohol will be served, but Zakrison and Delaney have big plans for the future.

“We’re hoping with the funds that we raise, from donations, to put that towards doing family-friendly events,” Delaney said, “because there are a lot of gay people in town with children and they want to be included.”

Zakrison, who has helped organize pride events in Victoria and Ottawa, is full of ideas from movie nights to potluck dinners and more.

“I’d love to have a big gay dog walk, where everybody brings their dog. We could go to Sylvia Grinnell Park,” she said.

“That’d be perfect because everybody has a dog here.”

The Sept. 27 event isn’t only for members of the LGBTQ community, but for their allies as well.

“Without allies, we wouldn’t have the numbers that we needed to advance various political and social justice causes,” Zakrison said.

“It’s funny, I have more straight people coming up to me telling me how excited they are about the event. I think they might be more excited about it than the gays,” she laughs.

The ultimate goal of Iqaluit Pride, Zakrison said, is to bring more visibility to LGBTQ community members in Iqaluit.

“There’s a lot more gay people in Iqaluit than you might think, but there’s an invisibility.” 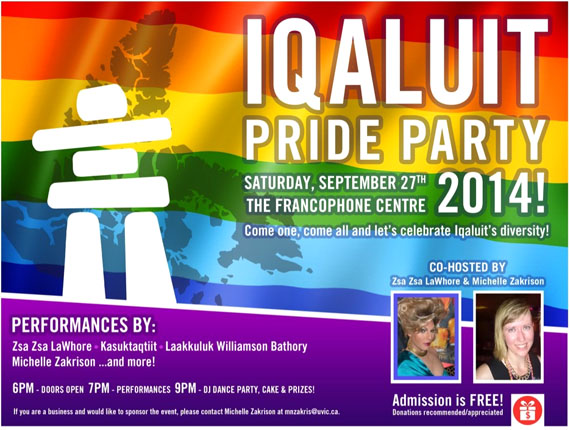 Organizers hope this Saturday’s Iqaluit pride party will become the first of many events.