Thousands of Nunavut artifacts head from NWT to Ottawa

Canadian Museum of Nature to house items under five-year agreement 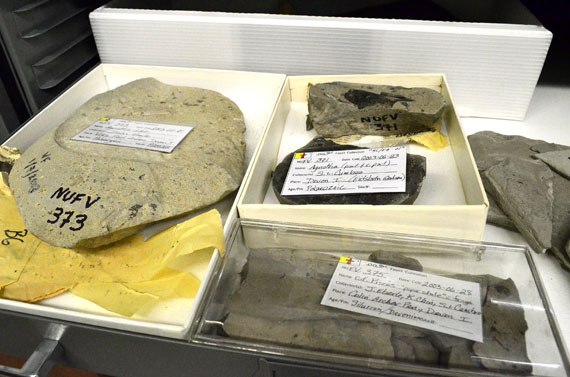 Here are some of the Nunavut fossil specimens already held at the Canadian Museum of Nature, in a special row of cabinets reserved for Nunavut inside their Gatineau storage facility. The museum will host another 140,000 items over a five-year period, the GN announced Aug.3. (FILE PHOTO)

Thousands of Nunavut-owned artifacts will travel across the country next year to their new — but temporary — home at the Canadian Museum of Nature in Ottawa.

The Government of Nunavut said Aug. 4 that it’s signed a five-year lease with the museum to host the territory’s archival collections, which total about 140,000 items.

The collection, currently housed at the Prince of Wales Heritage Centre in Yellowknife, include grave markers from Beechey Island for the last Franklin expedition, old kayaks and archival documents on the political development of Nunavut.

The transfer of the collection will mean a significant cost savings for the GN, while strengthening the territory’s relationship with the Ottawa museum, said its minister of Culture and Heritage, George Kuksuk, in the Aug. 4 release.

Through separate agreements, the Canadian Museum of Nature has curated Nunavut’s fossil collections since 2003 and in 2012, became the territory’s designated holding facility for archaeological collections gathered through GN-issued permits.

For its part, the presence of those artifacts will promote the museum’s “long-standing leadership in Arctic research and exploration,” said the museum’s president and CEO, Meg Beckel, in the same release.

But one of the major factors behind the move is the Government of Northwest Territories’ long-running request to have Nunavut’s collection moved, Kuksuk said, so the Prince of Wales centre can focus on its own cultural programming.

This year, the GN transferred another 8,000 pieces of art from the centre to a temporary home at the Winnipeg Art Gallery as part of another five-year agreement.

It’s unclear if at the end of those five years Nunavut will have its own heritage centre or museum ready to welcome its collections, complete with the temperature and humidity control, storage and security capacity to preserve artifacts.

The Nunavut Land Claims Agreement states “an urgent need to establish facilities in the Nunavut Settlement Area for the conservation and management of a representative portion of the archaeological record.”

But talks around that facility have been stalled for many years, likely due to the project’s estimated $120 million price tag.

In the upcoming transfer to Ottawa, Nunavut’s archaeology collections account for approximately 85 per cent of the materials being moved, spanning a period of 4,500 years.

The other materials include ethnographic materials, archived documents and natural history specimens.

The transfer to the Canadian Museum of Nature is planned for June 2017.