Three million years ago, when Greenland really was green 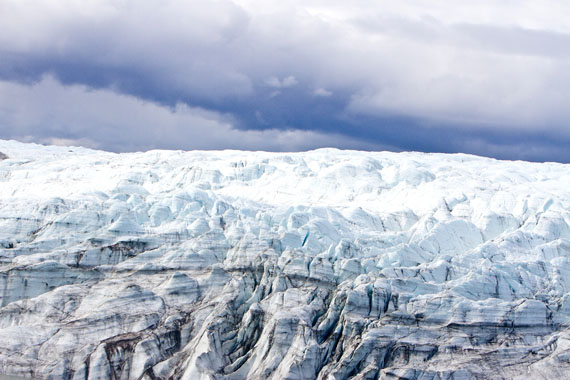 Under the Greenland ice sheet, scientists from the University of Vermont have found evidence of an ancient tundra landscape. (HANDOUT PHOTO, UNIVERSITY OF VERMONT) 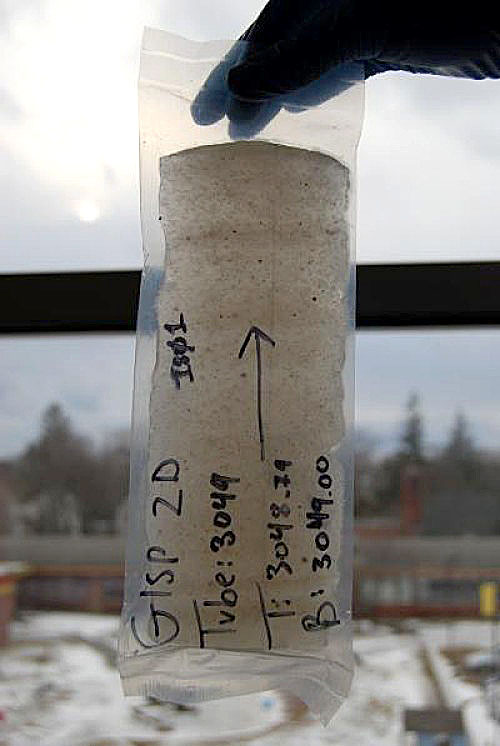 This piece of GISP2 ice core sample shows silt and sand embedded in ice. Soon after this picture was taken, the ice was crushed at a University of Vermont laboratory and the sediment was isolated for analysis. (HANDOUT PHOTO, UNIVERSITY OF VERMONT)

New research has revealed evidence of an ancient, three-million-year-old tundra landscape that lies preserved and untouched beneath the more than three kilometres of ice that form the vast Greenland ice sheet.

The research, reported April 17 in the journal Science, reveals that even during the periods of greatest warmth that came after the great ice sheet formed more than two million years ago, this landscape was never scraped away.

“It’s likely that it did not fully melt at any time,” geologist Paul Bierman of the University of Vermont said in a release.

The release said it’s well-known that moving glaciers act like massive belt sanders, scraping vegetation, soil and bedrock from the outer face of the earth.

But the Greenland glacier is different. Bierman said that for at least 2.7 million years, it has acted like a giant refrigerator, keeping the old landscape underneath it in mint condition.

“We demonstrate that the Greenland Ice Sheet is not acting as an agent of erosion; in fact, at it’s center, it has performed incredibly little erosion since its inception almost three million years ago.”

But many researchers are now worried about the future stability of Greenland’s huge ice sheet.

If fully melted, models show the volumes of melt-water could raise global sea levels seven metres, or 23 feet — and that Greenland could once again become green.

For their research, scientists tested 17 “dirty ice” samples from the last 12 metres of a 3,000-metre-long GISP2 ice core sample extracted from a place called Summit, Greenland in 1993.

They expected to find only soil eroded from glacier-scoured bedrock within sediment at the bottom of the ice core.

Instead they found soil that had been stable and exposed at the surface for 200,000 to one million years before it was covered by ice.

The research team also measured quantities of nitrogen and carbon that could have been left by plants in the core sample.

This analysis suggested Greenland looked like the green Alaskan tundra before it was covered by the world’s second largest body of ice about three million years ago.

But global temperatures are on a path to be “far warmer than the warmest interglacials in millions of years,” Bierman said.

“There is 2.7-million-year-old soil sitting under Greenland. The ice sheet on top of it has not disappeared in the time in which humans became a species.

“But if we keep on our current trajectory, the ice sheet will not survive. And once you clear it off, it’s really hard to put it back on.”