Time to get vaccinated against the flu: Nunavut’s health officer 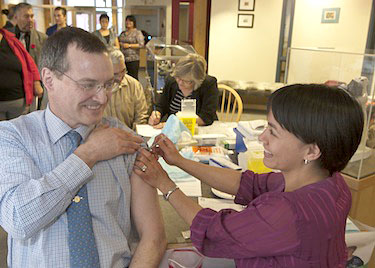 Nunavut’s health minister gets a flu shot from public health nurse Susie Pearce Oct. 30 at a special clinic in the Nunavut Assembly building. (PHOTO COURTESY OF THE GN)

The annual campaign to vaccinate Nunavummiut against influenza is now underway, the Government of Nunavut announced Oct. 30.

The free vaccine is available at health centres throughout Nunavut, and in Iqaluit at the public health unit in the Qikiqtani General Hospital.

As in Nunavik, Nunavut also plans to use the FluMist vaccine, which was introduced last year, and will be expanded this year to include children from two to 17 years of age.

Children and youth in this age group will receive the vaccine in a nasal spray, rather than through an injection.

“People at greatest risk from the effects of influenza are the very young and the elderly, and we can do our part to protect our children and elders by getting our flu shot,” said Dr. Maureen Baikie, Nunavut’s chief medical health officer. “People protect themselves and loved ones from influenza when they are vaccinated.”

There is less chance of children bringing the flu home from school to their families when they are vaccinated, the GN noted in its Oct. 30 news release.

The flu season runs from January to May in Nunavut.

Baikie encouraged people to get their vaccinations before Christmas so people will be protected when influenza virus arrives in Nunavut.

Flu, whose symptoms include fever, fatigue, muscle pain, coughing and headaches, can cause serious complications among babies under the age of six months, who cannot be vaccinated.

The flu vaccine, which reaches its maximum effectiveness roughly two weeks after you get it, protects you for six to 12 months from falling sick with certain strains of the flu.