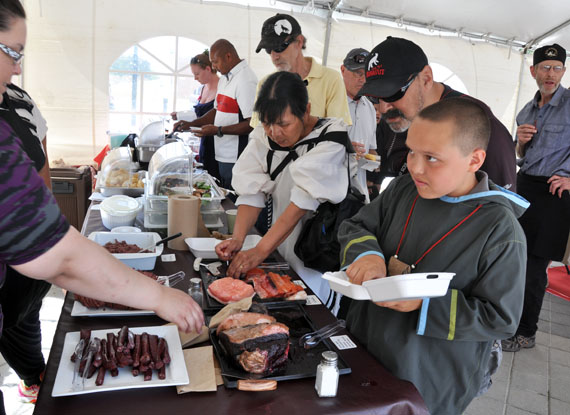 Eleven-year-old Albie Galliford tucks into some seal meat following the unveiling of Ahqahizu at York University. (PHOTO BY SARAH ROGERS) 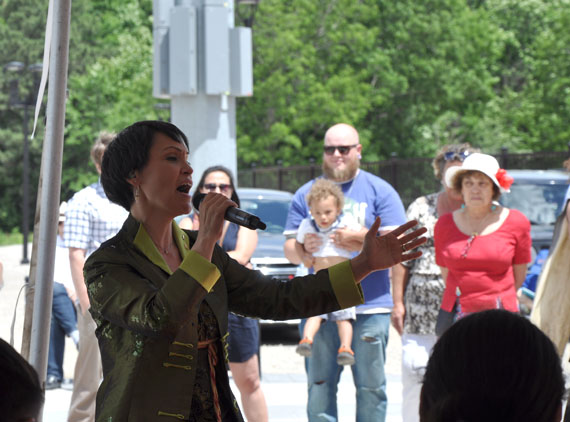 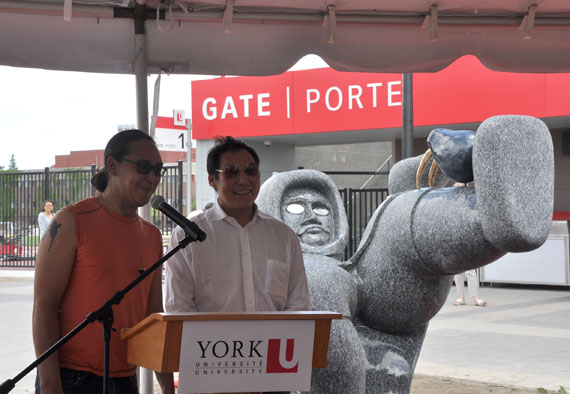 TORONTO — A university sports stadium is a pretty good place to erect a giant soccer player in granite.

But this soccer player is unique — the hooded man is poised in an Alaska high-kick stance, with a walrus skull for a ball at his left foot.

Komangapik and Curley were commissioned to create the sculpture as part of Mobilizing Inuit Cultural Heritage or MICH, a multi-media collaborative research project based at York.

Originally from Pond Inlet and now based in Quebec, Komangapik relocated to Toronto last summer to help the Toronto-based Curley design and carve the massive piece.

“The sculpture represents people who have died, and who we’ve been able to see playing soccer up in the northern lights,” Curley told a crowd in Inuktitut at the June 21 event.

Curley was referring to an Inuit legend that says the northern lights are themselves the souls of Inuit who have passed on.

That made the process a personal one for Komangapik whose father Mikiseetee died of cancer just before he embarked on the project.

“I told him we had this idea to do this big monumental piece, and he said “don’t worry, you’ll get it,’” Komangapik said.

“And now I can watch my father play soccer in the sky.”

The pair spent about 200 days working on the piece outside of York Lions Stadium, often in a cloud of dust.

The sculptors said they fielded questions from curious passers-by and heard a lot of encouraging honks from cars driving by.

There aren’t many Inuit on campus at York, Curley said, but he hopes Ahqahizu becomes a visible reminder of his northern culture.

More of that culture was on display for the crowd attending the event, including performances by Iqaluit drum dancer Matthew Nuqingaq and a recent Order of Canada recipient, singer Susan Aglukark.

York University president and vice-chancellor Mamdouh Shoukri called the project one of many efforts to “Indigenize” the university campus.

“In a multicultural city such as Toronto, this sculpture will create opportunities for dialogue about Inuit art and culture,” Shoukri said.

“And we at York are delighted to be part of this important conversation.”

Ahqahizu will also be on full display for athletes and spectators attending the 2017 North American Indigenous Games, set to be hosted at York University next summer.