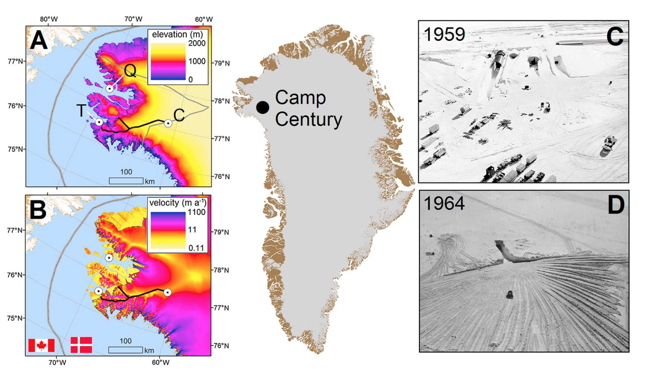 Taken from the research letter, this graphic shows the location of Camp Century, how the entrance looked during construction in 1959 and again in 1964. Graphic A shows Thule Air Base (T), Qaanaaq (Q), and Camp Century (C). Depth of the ice sheet goes from deepest, in yellow, to zero in blue. Graphic B shows the trails the pollutants could make to the sea from Camp Century, based on simulation models that take into account various melt and weather patterns. (PHOTO COURTESY GEOPHYSICAL RESEARCH LETTERS)

Buried beneath the Greenland ice sheet, a top secret American base decommissioned during the Cold War is on track to prove its engineers wrong by releasing toxic chemical and radiological material into the environment from a melting ice-tomb once thought “preserved for eternity” less than 60 years ago.

So what’s changed? Global warming—at levels thought impossible in 1967, when “Camp Century” in northwestern Greenland was closed for good, sealed well below a “dry snow zone” of the ice sheet where virtually no surface melt was ever expected to take place.

A research letter written by an international team of scientists is warning that Camp Century, which once contained a mobile nuclear reactor, may symbolize the latest emerging issue in the era of climate change.

“The potential remobilization of wastes that were previously regarded as properly sequestered, or preserved for eternity, is an instance, possibly the first, of a potentially new pathway to political dispute associated with climate change,” the research letter warned.

Because the American base is within Danish-controlled territory in Greenland, ownership over the toxic waste could become a political hot potato between the two countries in the coming decades.

The United States Army Corps of Engineers established Camp Century out of 55 hectares of tunnels dug out in 1959, about 200 kilometres east of Thule Air Base.

Equipped with a mobile nuclear reactor, the camp was the testing ground for a proposed sub-surface railway depot equipped with 600 ballistic missiles, dubbed “Project Iceworm.”

At its peak, the camp had the capacity to house about 200 soldiers, year-round—and its only one of five similar satellite camps surrounding Thule Air Base.

But when the U.S. Joint Chiefs of Staff scrapped “Project Iceworm” in 1963, the camp lingered on for seasonal use until 1967, when sappers collapsed the tunnels leading into the facility and closed the site permanently.

While the actual nuclear reactor was removed, the research letter says tonnes of other harmful wastes remain underground such as PCBs, biological waste, leftover diesel fuel and radioactive coolant once used for the reactor.

Sumps, or collection pools, for the liquid wastes were unlined at the time of their construction, the letter noted.

Modern scientific simulations now suggest that—either through evaporation of the ice sheet above the camp, or by the encroaching ice shelf—Camp Century’s contaminants will slowly but surely make their way coastward to the sea as temperatures continue to rise.

But researchers say it will take 88 years of persistent melting or evaporation, “to melt all overlying [ice] and expose wastes at the ice sheet surface.”

Despite the existence of radiological material at the site, the researchers believe that polychlorinated biphenyls or PCBs pose the highest risk for contamination given the volume of their use at the camp in everything from piping to paint. PCBs, used for decades in hundreds of industrial applications such as paint, rubber production and electrical transformers, have been banned by a United Nations treaty since 2001.

A 1951 treaty between the U.S. and Denmark specifically states that all property moved to Greenland by the U.S. would remain American property, however the by-products of that equipment is “legally ambiguous,” the researchers said, in an August 2016 citation in Geophysical Research Letters.

“Given the multinational origin and multi-generational legacy of Camp Century, there appears to be substantial ambiguity surrounding the political and legal liability associated with mitigating the [pollutants].”

This isn’t be the first time American military bases in northwestern Greenland have landed on awkward legal footing between Danish and American governments, and native Greenlanders.

In 2000, native Greenlanders, as well as the Inuit Circumpolar Council, strongly opposed the installation of anti-ballistic missile interceptors, proposed by the American government, at the Thule Air Base.

When Greenland’s premier chimed in on the project the following year, garnering an official response from then-President George W. Bush, Denmark reiterated publicly that Greenland, as a Danish territory, had no authority to negotiate with foreign governments.

Late last year, the Greenland government accused Denmark of violating an agreement it made to protect Indigenous Greenlanders by not addressing the potential environmental disaster at Camp Century. 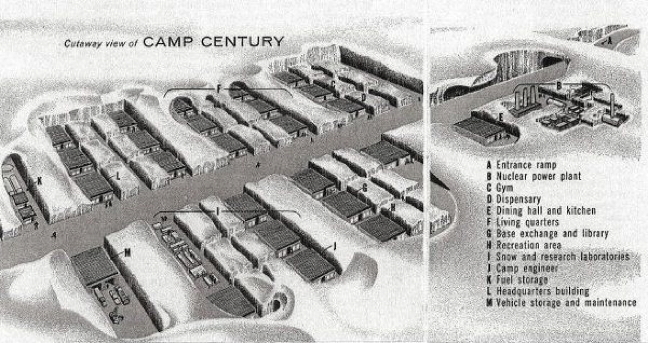 A cut-away of Camp Century from the 1960s. (PHOTO COURTESY U.S. GOVERNMENT)