Tracking down trichinella: walrus testing to stay in Nunavut 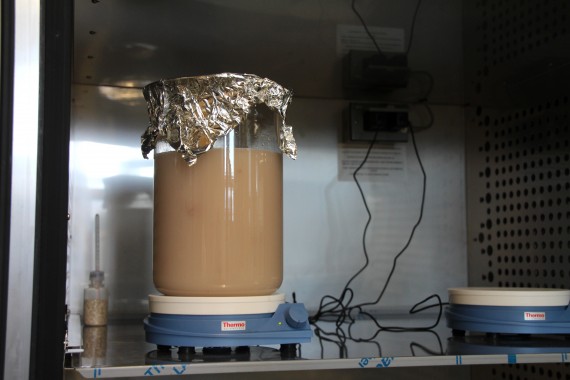 This incubator and spin plate could take about two hours to break down muscle tissue and release Trichinella larvae that could be in this bear tongue that is being digested, Shirley said. (PHOTO BY BETH BROWN) 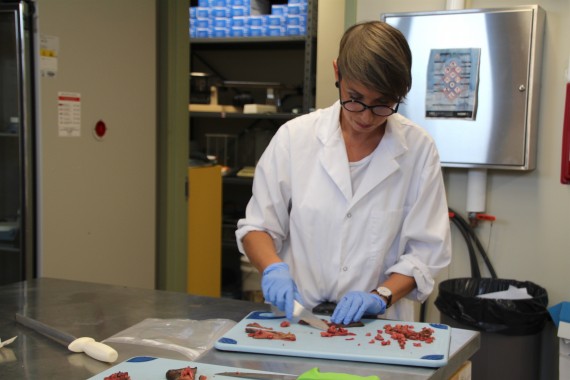 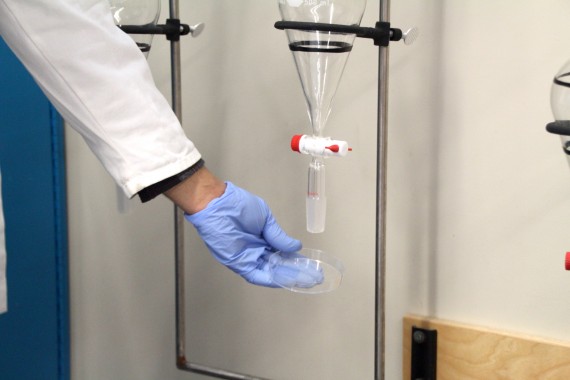 The digested tongue is run through a funnel like this one, so that any larvae in the mixture can settle and be caught on a petri dish. (PHOTO BY BETH BROWN) 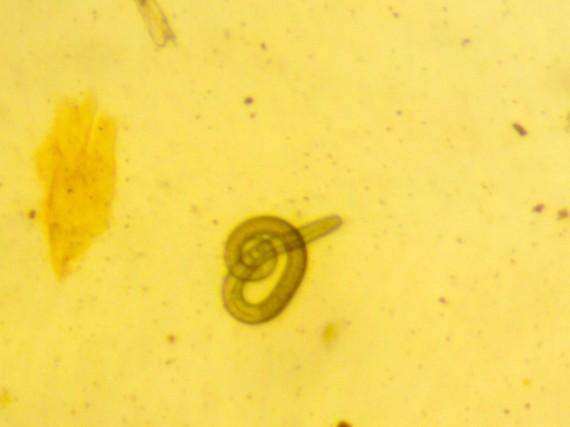 This is a photo taken through a microscope of a trichinella spiralis larvae after it has gone through artificial digestion. The larvae are similar to trichinella nativa, a parasite found in northern wildlife that causes illness to humans when eaten in raw meat. (PHOTO BY DANIEL TAUKIE) 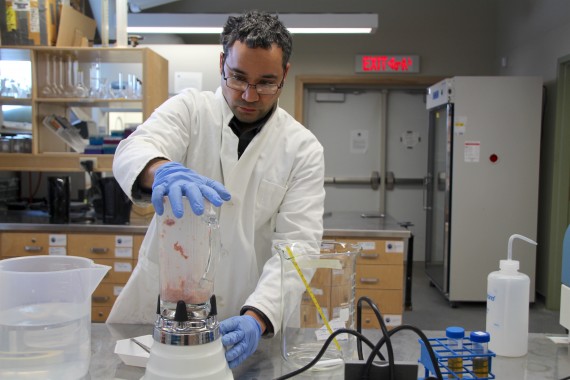 A team of analysts from NRI, NTI and GN-Health get trained, June 2017, in trichinella detection by experts from the Canadian Food Inspection Agency’s centre for foodborne and animal parasitology. (PHOTO BY DANIEL TAUKIE)

Tiny shreds of blended bear tongue slowly start to swirl within the beaker of opaque pink liquid that Jamal Shirley has just placed inside an incubator at the Nunavut Research Institute.

“We’re simulating what happens inside an animal’s stomach,” said the research manager for the Iqaluit-based lab.

For almost two hours a magnetic stir plate will rotate the tumbler full of artificially chewed-up tongue, while an enzyme called pepsin helps to break open microscopic cysts in the warm muscle tissue.

It’s what’s inside those cysts that Shirley seeks: a parasite known as T. nativa, a species of trichinella worm.

The parasite is familiar to those Nunavummiut who like to feast on raw, or even fermented walrus (a delicacy known as igunaq), and polar bear meat.

That’s because the essentially invisible larvae, which cause a slew of health problems when consumed by humans, can only be killed through cooking.

“As a parasite, its ability to withstand freezing and to survive for years in frozen samples is an amazing feature,” Shirley said. “They are really hearty, tough little organisms.”

In December, a pilot project to set up Nunavut’s first trichinella testing facility successfully wrapped up. While that program is currently being evaluated by the partner organizers—the Nunavut Research Institute, Nunavut Tunngavik Inc. and the Government of Nunavut’s Department of Health—this new in-territory testing capacity isn’t about to go away, Shirley said.

“They’ve been calling for years to have this in house,” said Wanda Joy, environmental health specialist for Nunavut’s Department of Health.

Trichinella testing has been available through the Department of Health, Joy said, but until now, all testing for trichinella in Nunavut wildlife took place in Kuujjuaq.

“Hunters found the time it took to get results was a little long … it could take a week depending on weather, or which community,” she said. “They want results right away so they can share the meat.”

Right now, only a small portion of Nunavut’s walrus harvest is tested, so making the testing faster and more accessible would encourage more Nunavummiut to get their hunt checked.

“We don’t require it, it’s a voluntary program that we offer for free to try to prevent illness in the communities,” she said. “It’s a huge animal that could create a huge problem in the community where the meat is shared throughout.”

When infected meat is eaten, side effects can start with feelings of nausea that lead to vomiting and diarrhea, stomach and muscle pain, as well as sweating, weakness and rashes. People will only get better if they receive treatment to kill the parasite.

Shirley said the parasite is primarily found in carnivores.

“Animals become infested by eating the muscle tissue of another infected animal that contains the cysts,” Shirley said.

Once an animal digests infected meat, the larvae travel to its intestines to grow into adult parasites.

While walrus mostly eat clams, which are not known carriers of trichinella, they sometimes eat seal, which can be carriers of the parasite, Shirley said, adding that it is also possible the walrus could at times be cannibalistic.

Trichinella isn’t flagged as a problem in polar bears, because bear meat is always cooked.

“The main concern for human health risk is through walrus,” he said. “The risk is only related to walrus that is eaten raw or fermented.”

But today, Shirley, and NTI policy advisor Sharon Edmunds, are sampling a bear tongue in the hope of tracking down sample larvae.

In June, five staffers from the NRI, NTI and the Nunavut’s Department of Health received training to do the tests though the Canadian Food Inspection Agency.

“If we can get samples of local Arctic species of trichinella, we can have that used by CFIA to provide relevant proficiency materials for our lab,” he said. Right now, training for trichinella testing is often done using samples from horses or pigs, which carry a different strain of the parasite.

While preparing the polar bear tongue for in-lab digestion, Shirley said that the bear sample doesn’t blend as well as a walrus one.

Once the digestion simulation is done, the liquid paste is filtered through a very fine sieve and a funnel so that any released larvae can settle and be transferred to a petri dish for viewing under a microscope.

“It’s a labour-intensive, low-tech testing protocol that’s really good for people at a community level to perform. You don’t need years of microbiology training to be able to do this proficiently,” Shirley said.

That means the new in-territory testing could lead to new employment opportunities for Nunavummiut.

“It’s critical that during the harvest season we have a sufficient number of people on call and available to receive samples and do the testing because the whole purpose is to have that quicker throughput of samples and faster turnaround of results to the community,” Shirley said.

Walrus are hunted all through the ice-free season, though fall is a common time for harvesting. The research institute tested 15 walrus last season.

Every sample tested during the Nunavut pilot project was also checked at the testing centre in Kuujjuaq. Testing costs are covered by Nunavut’s Department of Health.

This month, students from Nunavut Arctic College will do a training session on trichinella testing and, from there, curriculum will be developed to incorporate the training into existing college programs, such as the Environmental Technology Program.

Once the pilot is fully evaluated, the partnering groups will establish a long-term communications strategy, so that the testing can be promoted more widely to hamlets and community hunters and trappers organizations.

By promoting the program and training enough people, a 24-hour turnaround rate could be possible for communities close to Iqaluit. That’s if weather and flight schedules run perfectly, she said.

An increase in testing will also help researchers learn what the prevalence rates are of trichinella in Nunavut, and figure out if there are any known “hot spots” for trichinella, Edmunds said, adding that right now that information isn’t available.

“The data that’s out there is very inconsistent … It’s either a very limited concern or it’s a real concern.”

But the polar bear tongue that Shirley and Edmunds spent their morning processing isn’t going to help with that pursuit of science, because the malleable muscle that T. nativa are often attracted to turned out to be parasite free—this time. 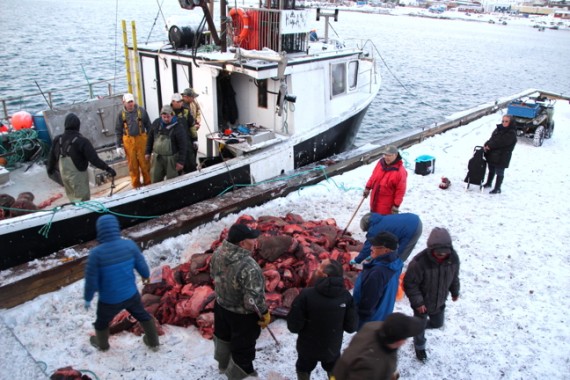 Walrus from this October hunt near Iqaluit all tested free of parasites. The meat was shared throughout the community. (FILE PHOTO)