Centre to roll out heavy equipment operator training next 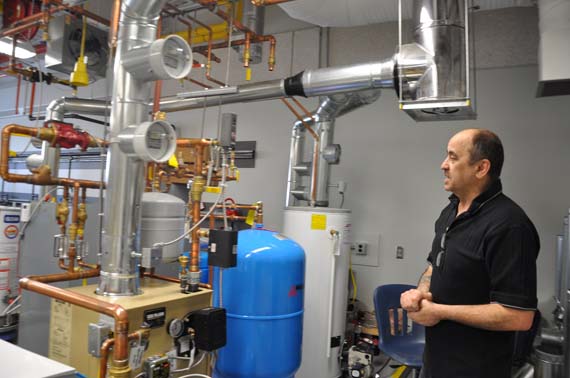 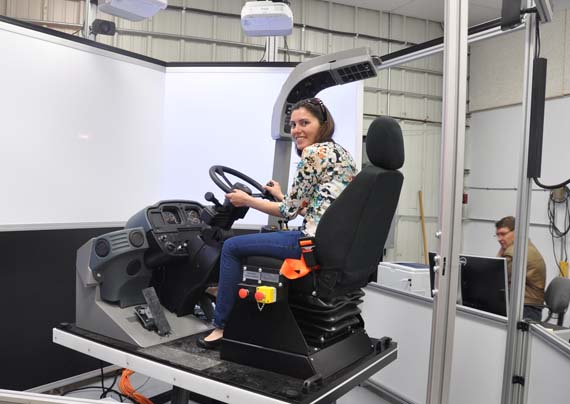 Stephanie Lachance, the centre’s new mining training coordinator, sits on the new loader simulator that will be used to train students in heavy equipment operation. (PHOTO BY SARAH ROGERS) 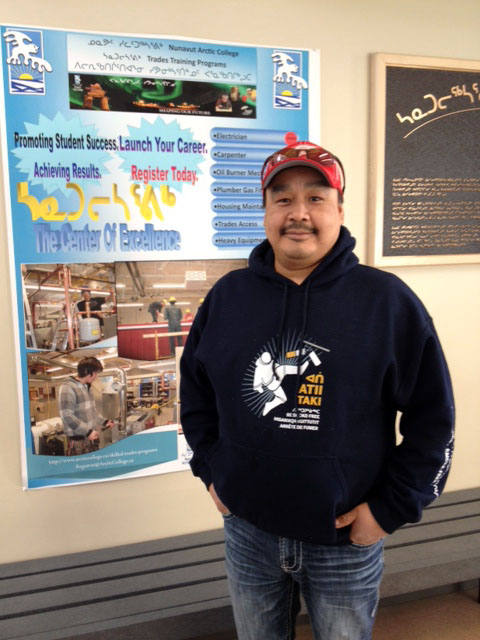 Aaron Pilakapsi is the first Journeyman Oil Burner Mechanic to graduate from Sanatuliqsarvik this past spring. (PHOTO COURTESY OF NAC)

Napier, the centre’s director of trades and technology, walks into one of the centre’s classrooms, where a dozen furnaces and water heaters sit in two neat rows, hooked up to a maze of pipes. The centre’s oil burner mechanics students installed all the copper piping during classes this past spring.

Down the hall, Napier opens a door into another lab, where the wood frame of a two-storey home has been built. In it, students have been able to do hands-on electrical writing and plumbing.

The trades school, called Sanatuliqsarvik, has become a living laboratory for the dozens of students who have enrolled in its programs since the centre opened in 2010.

The centre has become a focal point in Nunavut for trades and trades access programs, which help give students the background they need to enter into an apprenticeship.

“After our fourth year, we’re starting to see the results,” Napier said. “We’re seeing the employers come to us seeking out graduates, because they’ve got this knowledge and commitment. The demand is there, and it’s a good thing.”

“This year we had more applications so far than we had all of last year.”

Students come from across the territory, although the majority hail from Kivalliq communities and from Rankin Inlet in particular.

“Overall, our goal is to create a more skilled workforce among Nunavummiut,” he said. “And there’s greater success for students to succeed in their home environment.”

And although the trades school has yet to hit its capacity, the centre has graduated ten pre-apprenticeship students, and another 26 have completed apprenticeship programs.

Sanatuliqsarvik graduated Nunavut’s first journeyman oil burner mechanic earlier this year: Aaron Pilakapsi earned his certification from the centre this past March, from one of the few programs offering inter-provincial red seal certification in the territory.

Meanwhile, the centre continues to grow its programs.

While Sanatuliqsarvik is starting to gain more recognition from the mining industry, the school recently hired a mine training coordinator, who liaises with mining companies working in the territory.

“All of the trades are in high demand, from all stages of a mine’s development,” said Stephanie Lachance, who filled that role about a month ago. “We try and work with them to offer programs specific to their needs.”

As an example, Lachance and her colleague Daniel Friesen are in the process of developing a made-in-Nunavut heavy equipment operator course.

The trades school just invested in a handful of new simulators, stationed in a college warehouse at the other end of town.

One of them, a small yellow excavator, allows you to put it into Caterpillar or John Deere mode. It will eventually be set up in a sand pit for students to practice on.

In another room, the life-like interior of a loader sits in front a screen, where instructors can program a scenario, like loading materials into a truck. The system also records student progress and corrects their performance.

The program will require a few more years to develop, Napier said, but the college hopes to see it up and running by 2018.

And he hopes by then the college’s reputation will have grown even more, particularly among young high school graduates.

“We’re anticipating as we get more into the school system, we’ll see more high school students apply,” he said. “This new government is really pushing education, so we should see stronger candidates.”

But Napier wants Nunavummiut of all ages to be realistic about what it takes to succeed. Many of the trades programs require a good background in math and science.

He also encourages people to pick a career path that they feel drawn to.

“If you want to further your education, pick a program that’s of interest to you,” he said. “You’ll have a better chance to succeed at it.”