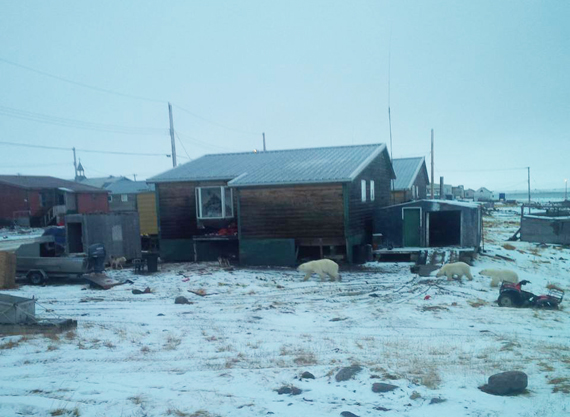 Polar bears sniff around an Arviat home in October 2014. Despite the risk of bear sightings, children in the Kivalliq community will be trick-or-treating outdoors again this year. (FILE PHOTO )

Arviat parents, get that candy ready—Halloween is moving back outdoors this year.

Trick-or-treaters will be back on the streets going door-to-door in the Kivalliq hamlet this Oct. 31, with or without polar bears lurking about.

The hamlet has hosted Halloween activities indoors since 2014 for that very reason; as a safety precaution due to the risk of children running into polar bears.

Over the last decade, Arviat has grown a reputation as the polar bear capital of Nunavut, particularly through the month of October as the bears make their fall migration north.

But Halloween lover and aunt Alanna Copland doesn’t think that should spoil one of the kids’ favourite days of the year.

“I have nephews who love Halloween and dressing up and going door-to-door,” said Copland. “So I thought there has to be another way to do it.”

Arviat employs a couple of polar bear monitors, who patrol the community day and night through the fall and early winter months.

But Copland reached out to the community for more volunteer bear patrollers to keep an eye out for trick-or-treaters Oct. 31.

And she got a great response: Arviat’s search and rescue crew, department of environment staff and the community’s 18 firefighters have all signed on to patrol in and around town throughout the evening.

“I think just having heavy traffic will help,” said Copland, adding that her nephews are “really excited.”

Other parents in the community of roughly 3,000 have responded well to the idea, especially parents of younger children who haven’t yet had the chance to trick-or-treat.

“Right on!” wrote one mother on Facebook. “My panik will get to go trick or treatin door to door for the first time and see how full the bags usually are.”

One of the criticisms of the hamlet’s decision to host the event indoors was the lack of treats for youngsters—some parents said by the time their children waited in line for their turn, there was nothing left for them.

Copland said the hamlet didn’t consult the community to see what other solutions were possible.

“We’re right in the migration route of polar bears and that’s not going to change anytime soon,” she said. “There’ve been sighting even in the last couple of days.

“But I think the community can come together and help children celebrate occasions like this.”

Any residents are welcome to join their patrol with their own vehicles, she said.

The hamlet will still host an indoor event at the community hall Oct. 31 at 6 p.m., featuring games, face painting and candy give-aways.

At 8 p.m., the hall will be converted into a haunted house for youth 14 years and older.