Trudeau brings a sunny way to an Arctic winter’s night 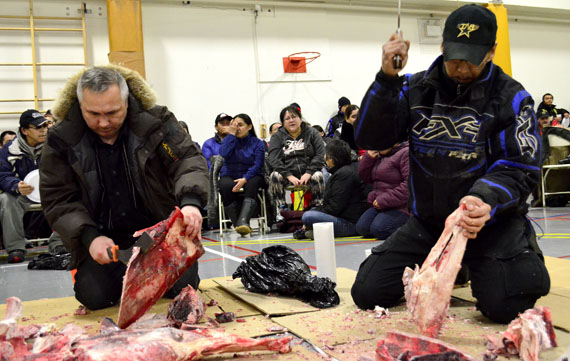 Volunteers chop up chunks of frozen caribou meat that Justin Trudeau brought from Rankin Inlet for a community feast Jan. 12 in Iqaluit. The food disappeared in two or three minutes after hungry Iqaluit residents grabbed what they could and stuffed it into plastic bags to take home. (PHOTO BY JIM BELL) 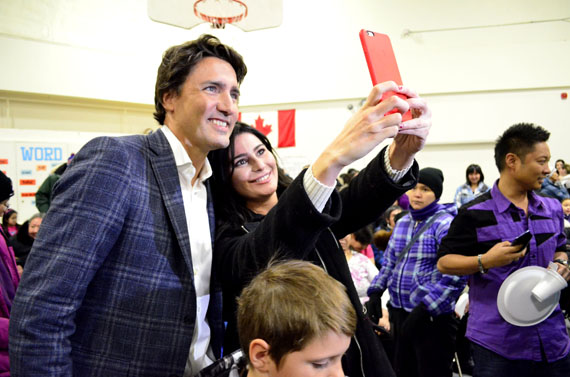 An Iqaluit resident poses with Justin Trudeau for a selfie at a community event at Nakasuk School in Iqaluit held Jan. 12. (PHOTO BY JIM BELL)

Echoing the style of Wilfrid Laurier, the revered Liberal leader whose face appears on our five-dollar bill, Justin Trudeau opted for the sunny way on a Jan. 12 visit to Iqaluit.

Casting himself as a healer and bridge-builder who would bring a conciliatory approach to the office of prime minister, Trudeau, accompanied by his seven-year-old son, Xavier, gave out free food to the hungry and posed for numerous selfies, hugs and handshakes.

“We understand that all the problems we have don’t get solved by pointing fingers, by highlighting differences. They get solved by working together,” Trudeau said in a pep-talk delivered to a mostly partisan Liberal audience gathered at the Iqaluit francophone centre for a meet-and-greet session.

Earlier that evening Trudeau had visited Nakasuk School, where he hosted a rally and community feast that drew more than 150 people.

There he arrived with cartons of legally harvested caribou meat from Rankin Inlet, where his plane had briefly landed on its way over from Yellowknife.

The frozen caribou meat, along with a hefty offering of frozen Arctic char, disappeared in two or three minutes.

Most Iqaluit residents didn’t eat any food at the feast. Instead, they stuffed chunks of quaq into plastic bags and headed for home, a sign that many hungry event participants had shown up for the free protein.

Just prior to that, Trudeau had attacked Stephen Harper’s Conservative government for ignoring human development in the Arctic, and for the perceived failure of Nutrition North Canada.

“Programs like Nutrition North have been a total failure. It needs to be redone, rebuilt,” Trudeau said, producing a loud cheer.

Trudeau also took a shot at Nunavut’s Conservative MP, Leona Aglukkaq, saying the Liberals would offer a government “where you have an MP who is a voice for Nunavut in Ottawa and not just Ottawa’s voice in Nunavut.”

But Trudeau did not offer many specific policy ideas, saying the purpose of this visit is to meet people and learn.

He reminded Iqaluit residents that his father, Pierre Elliot Trudeau, exposed him to northern Canada at an early age.

“My father brought me to the North many, many times when I was a kid so I could learn early on to love not just the North but also the people of the North,” he said.

“This present government has been wanting to develop the land instead of the people,” Anawak said.

Trudeau’s visit to Iqaluit closes a brief northern tour that took him through Inuvik, Yellowknife and Rankin Inlet.

Since becoming national Liberal leader in April 2013, Trudeau has visited 140 communities and attended more than 1,000 events in every province and territory of Canada, Michel Potvin, the president of the Nunavut Liberal Association, said.

Right now, the Liberals hold only 35 seats in the House of Commons, well behind the New Democratic Party and the governing Conservatives.

But the ThreeHundredEight.com aggregated poll site estimates that if an election were held now, the Liberals would gain 35 per cent of the popular vote, slightly ahead of the Conservatives who sit at 33 per cent.

The New Democratic Party trails well behind, at 21 per cent, the polling site estimates.

That means that to form a majority government, which would require 171 seats in an expanded House of Commons following the next election, Trudeau must do more work to improve his party’s standing.

He suggested to Nunavut Liberals that the best way to get there is to offer a different style than the Harper Conservatives, who he accused of using the “politics of division.”

“Our capacity to be strong is not in spite of our differences but because of those differences,” Trudeau said.

He said, however, that Harper’s strategy of using divisive wedge issues and negative attack ads has worked in the short term.

“That’s one of the dirty little secrets about politics, negative attack ads, politics of division, that works. It works to get you elected. Even with a majority, Stephen Harper is proof of that,” Trudeau said.

But he said that approach has blown up in Harper’s face.

“But what he is also proof of is, once you’ve gone and divided a country against itself, and drawn on all those wedge issues and fault lines within our country, it’s very hard to govern for the whole…,” Trudeau said.

“What we have seen over the last eight years is a total failure to get anything done — because he has failed to understand that in the 21st century, it is not governments who grant permits but communities that grant permission.”

The Nunavut Liberal Association, however, has yet to announce a candidate for the upcoming federal election, which must be held on or by Oct. 19, 2015. 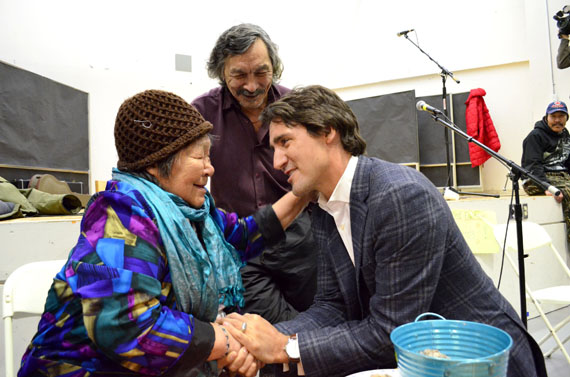 Alacie Joamie of Iqaluit and Justin Trudeau share an affectionate moment at a community event held Jan. 12 in Iqaluit. (PHOTO BY JIM BELL)