Trudeau visits Iqaluit in bid to wrest Nunavut from Tories 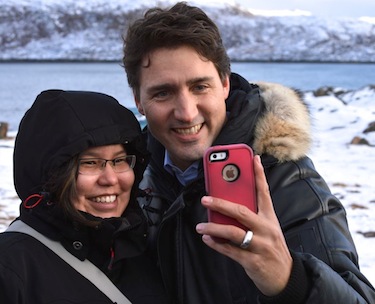 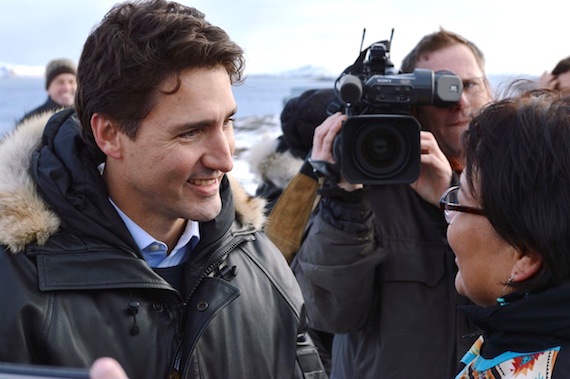 As a television camera operator shoots the scene, Liberal leader Justin Trudeau speaks to an Iqaluit resident who came to Rotary Park in Apex Oct. 10 to hear his message for Nunavut residents. (PHOTO BY STEVE DUCHARME) 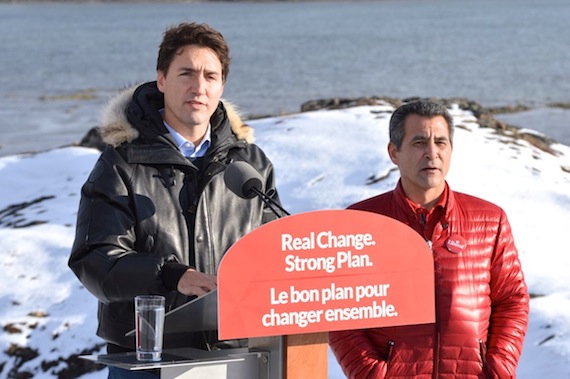 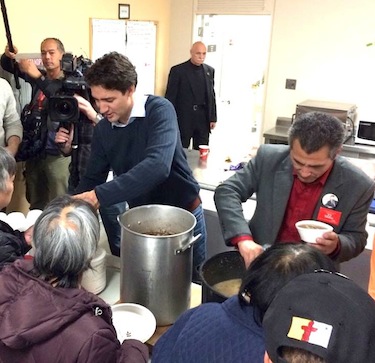 In this last-minute stop in Nunavut, Trudeau showed he wants to take the Nunavut riding held by Conservative incumbent Leona Aglukkaq since 2008 — and ensure that Nunavut voters hear promises made to northerners that were released earlier this week in Yukon.

“When the Conservatives replaced the food mail program with Nutrition North, they promised it would be an improved subsidized food program, it was supposed to make healthy food more accessible and affordable… Well, it hasn’t done either,” Trudeau said, standing with Tootoo behind a red-and-white podium set up to maximize the backdrop.

The Conservative-launched — and largely unpopular — Nutrition North program, meant to reduce the cost of food in the North, already receives $66 million a year from Ottawa.

“We’ll work with northern communities to make sure the program is more transparent, more effective and more affordable to you,” Trudeau said to the crowd gathered at the park.

And, as was the case during Mulcair’s visit, Trudeau’s appearance provoked Aglukkaq to circulate a statement to media.

“I trust that you will use your time in Nunavut to explain to Nunavummiut about why you have consistently used your time in Ottawa to fight against the interests of Nunavut,” said Aglukkaq, who went on to defend her party’s $11-million dollar funding increase to Nutrition North.

Trudeau used his time at the podium to also remind northern voters of another promise made earlier this week: to increase the Northern Residents Deduction by 33 per cent to $22 per day.

“For residents who live in Canada’s northern zone, it provides a new annual maximum deduction of $8,000 a year,” Trudeau said.

An Oct. 10 Liberal news release stated this deduction would be indexed “to keep pace with inflation.”

“We’re, of course, intending, with the Northern Residents Deduction, to keep following the costs of living in the North, and we will sit down and work with people in the North to ensure that we are matching their needs, not just right now but for years to come,” said Trudeau.

Trudeau finished off with a strong endorsement of Tootoo, a former MLA and speaker in the Nunavut legislature.

“Tootoo is going to be an extraordinary voice for the North and Nunavut in Ottawa, instead of being what we have now, which is Ottawa’s voice here in Nunavut,” said Trudeau.

If that line sounds familiar, it may be because you heard a similar statement last month from ex-Liberal turned NDP candidate Jack Anawak, who also wants to wrest the Nunavut riding from Aglukkaq, along with the Green Party’s Spencer Rocchi.

While campaigning in the western Nunavut town of Cambridge Bay, Anawak said that, if elected, “I will represent Nunavut in Ottawa and not Ottawa in Nunavut.”

Trudeau continued his campaign stop in Iqaluit with a community feast at Inuksuk High School in Iqaluit, where 18-month-old Hadrien was fascinated by elder Inuapik Sageaktook as she tended a qulliq.

“This is a family thing for me,” Trudeau told the crowd, before he and Tootoo took their place behind huge pots to serve up stew to everyone.

“Just this last January I brought my eldest son Xavier, the way that my father brought me so many times when I was a kid, and now I get to bring my other son Hadrien.”

Prime Minister Stephen Harper also made a pit-stop in Iqaluit in August to support Aglukkaq’s candidacy with a quick tour of Sylvia Grinnell Territorial Park and an invitation-only speaking event.

A Nanos poll released on Oct. 10 puts the Liberal support at 34.8 per cent support nationally, Conservatives at 28.6 per cent, the NDP at 24.9 per cent and the Green Party at 5.4 per cent.

Many in Nunavut have already voted. Advance polling stations in some Nunavut communities opened Oct. 9 and will remain open until Oct. 12.

You can check for an advance voting station in your region here. 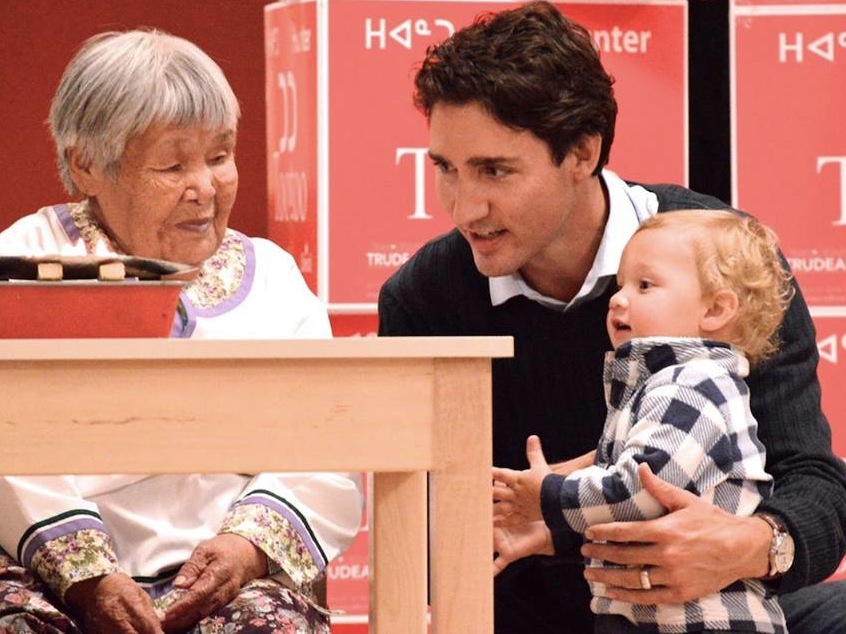 Inuapik Sageaktook, Liberal leader Justin Trudeau, and his 18-month-old son, Hadrien, by the qulliq, Oct. 10, at the community feast in Iqaluit. (PHOTO BY STEVE DUCHARME)