It’s fire, not ice in Greenland, as tundra fires sweep across northwest coast 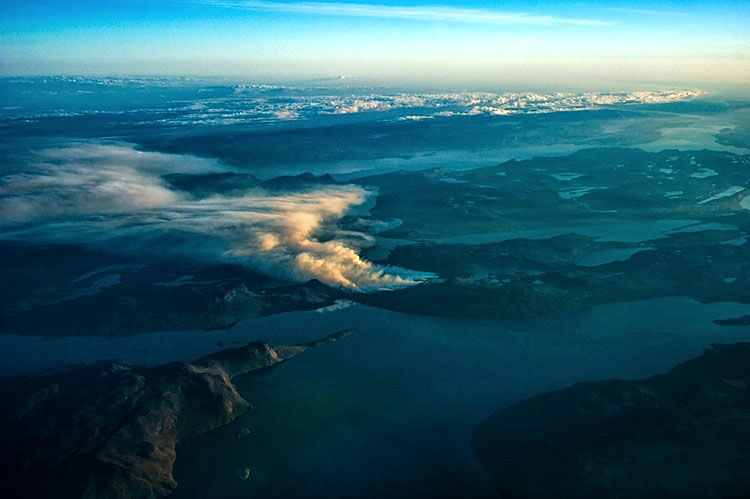 Smoke spirals up into the air from a fire near Sisimiut in this photo taken by Air Greenland pilot Lasse Reiding the night between Aug. 3 and Aug. 4. 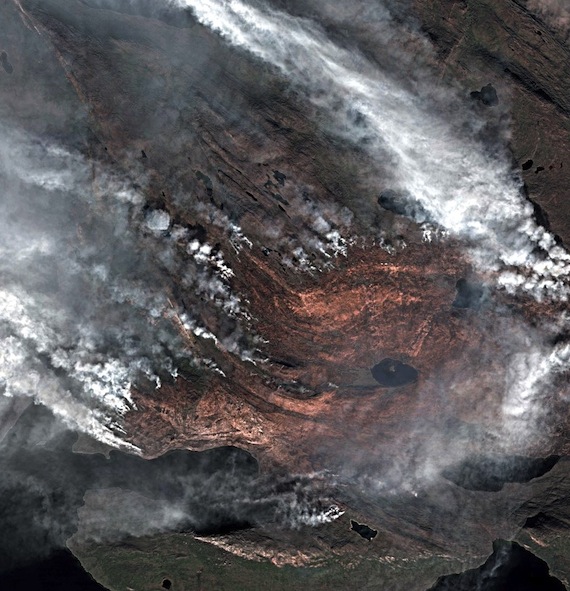 This image posted on Twitter by Deimos-2 shows the Nassuttoq wildlfire in Greenland on Aug. 8.

Only weeks after a deadly tsunami hit Greenland, the island now faces a new natural disaster: tundra wildfires along its northwest coastline, from Sisimiut to north of Ilulissat.

“We have been going yesterday, all night, and are still running out there,” Bjarne Gregersen, who heads firefighting and emergency services of the Qaasuitsup Municipality told the Sermitsiaq AG news organization during the afternoon of Aug. 8 about a new fire north of Ilulissat.

A second major fire near Sisimiut has been burning for a week at Nassuttoq, 137 kilometres northeast of that town. That fire had burnt over more than 4.25 square km as of Aug. 8, according to a recent fire extent map, and spewing smoke high into the air.

That fire, fed by burning peat, could go on for weeks, experts say.

As of early August, there have been about 40 wildfires in Greenland, four times more than the 10 fires recorded in 2016.

“Wildfires have occurred in the past over Greenland but 2017 is exceptional in number of active fire detections by MODIS (satellite sensors,)” Stef Lhermitte, a satellite remote sensing specialist from the Delft University of Technology in the Netherlands, said on Twitter, where many are tracking the unusual fire season in Greenland.

Commonly seen already in southern Nunavik and the James Bay region, these kinds of naturally-caused fires may become more common in the higher Arctic regions as well.

That’s what the International Panel on Climate Change predicted in its sweeping assessment of climate change that “in most regions, there is likely to be an increased risk of forest fires, resulting in a change in vegetation structure that in turn exacerbates this risk.”

Arctic peat lands, with their layer of decayed vegetation, are known to become more susceptible to fire as they dry out, due to increased temperatures and less precipitation.

But apart from the danger posed by these low-lying fires, there’s an additional risk: as peat burns, it in turn releases carbon dioxide into the atmosphere.

So this means that, with these fires, more climate-warming emissions enter the air. Scientists have already noted an upswing in emissions due to the current wildfires in Greenland.

The wildfires in Greenland are also likely to affect reindeer, by reducing their habitat.

For now, the reindeer can flee to safety—but they may not return to the area.

Christine Cuyler from Pinngortitaleriffik, the Greenland Institute of Natural Resources, told Sermitsiaq AG that after similar fires in Canada reindeer did not return to the burned areas, even if the animals had used these before for grazing.

And the fire near Sisimiut, with a population of about 5,000, is already having an impact on the economy by limiting activities popular with tourists,

“Due to a large wildfire and the excess smoke released in the area of Nassuttooq and Amitsorsuaq near Kangerlussuaq, all traffic in the area, including hunting and hiking on the Arctic Circle Trail, are not recommended until further notice,” reads a notice on the Travel Greenland website page for Sisimiut.