TV Nunavut: could it really happen? 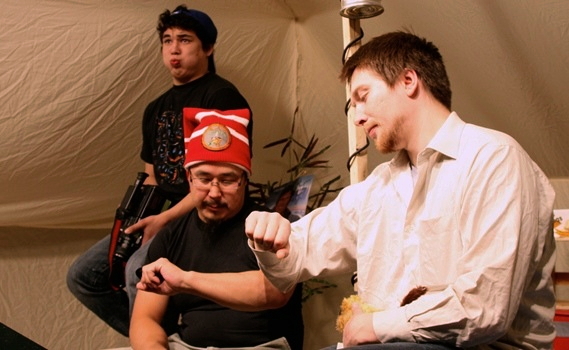 The TV Nunavut Educational Broadcast Society hopes to create a Nunavut-wide educational channel that all households of the territory can pick up. Content would include productions by the Inuit Broadcasting Corporation, such as Qanurli?, a comedy show geared toward Inuit youth. (COURTESY OF IBC) 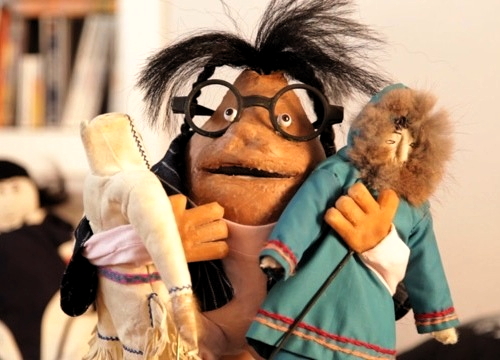 A scene from IBC’s long-running children’s show Takuginai — the kind of Inuktitut educational content Nunavut TV would hope to include in its roster. (COURTESY OF IBC)

A group of television and film producers behind a project to create TV Nunavut, a territory-wide network devoted to broadcasting Nunavut and Inuit-made programming, posted a milestone this month.

The TV Nunavut Educational Broadcast Society learned late last week that their promise to deliver educational content for the territory would guarantee them a place in basic cable packages.

The Canadian Radio-television and Telecommunications Commission announced March 19 that cable companies must provide a basic package of channels at no more than $25 a month.

“If TV Nunavut is successful at getting an application approved with the CRTC, that means it would be available on direct home, and cable too,” said Jerry Giberson, broadcast and telecommunications consultant for the TV Nunavut society.

The CRTC announcement marked a small victory, but perhaps the biggest one so far for the group, which formally incorporated as the “TV Nunavut Education Broadcast Society” one year ago.

Last September the society appeared at the CRTC’s Let’s Talk TV hearings in Ottawa. The thrust of the group’s presentation was that educational broadcasters “should be must-carry,” Giberson said.

Once it earns its license to broadcast, TV Nunavut would be classified as a “regional educational broadcaster,” and as such would be transmitted into all Nunavut households that have a TV, Giberson said.

“We’re happy to see that the CRTC listened to the message about educational broadcasters,” said TV Nunavut society chair Charlotte DeWolff, who presented at the fall 2014 hearings.

The society’s next steps are to build more support and secure funding for the future TV channel. The group hopes to gather all the necessary requirements to complete and submit its application with the CRTC this year, DeWolff said.

Once licensed, TV Nunavut will have access to funding that could allow it to be up and running by early 2017.

The new station will be a distributor of made-in-Nunavut programming, not a producer.

DeWolff said that means sourcing programs from Nunavut’s biggest TV producer, the Iqaluit-based Inuit Broadcasting Corp., which has long supported the idea of a regional broadcaster for Nunavut.

“We don’t want to compete with the production [companies] at all,” DeWolff said. “We want to be a distributor of programming that’s produced in the communities, by independent film producers, and maybe even by some of the community TV channels or film societies.”

The idea of an educational Nunavut-wide TV channel was born in 2007, DeWolff said, when IBC cautioned the Nunavut government that Inuit-language television programming was in decline.

Then, as is the case today, APTN was the only Nunavut-wide broadcaster of Inuit language programs.

“We were talking about Inuit languages’ loss,” DeWolff said.

“That’s where the seed for the idea of a regional broadcaster came about.”

DeWolff and other TV Nunavut board members said the decline of Inuktut programming continues to this day.

As a national broadcaster, APTN has expanded its offer of programming in other aboriginal languages over the years.

“The aboriginal-language production industry in southern Canada has grown immensely, mostly due to APTN,” said Debbie Brisebois, executive director of IBC and board member of TV Nunavut.

“When APTN started, there was a lot of room for the Inuktitut language. And now there’s lots of producers out there working in Mohawk, Cree, Ojibway,” she said. “So the competition for time slots is certainly a lot more intense.”

IBC produces five shows in Inuktut for APTN. One of them, a children’s program called Takuginai, won’t air next season. New Takuginai episodes will appear online only.

“The whole reason behind TV Nunavut is the language,” DeWolff said — to promote and preserve Inuktut.

Nunavummiut also want a regional station where they can see programming that is relevant to the territory. Added to that, TV Nunavut may also offer programs from outside the territory “versioned” into Inuktitut.

For example, DeWolff once heard elders say they would love to see David Suzuki’s CBC production, The Nature of Things, produced in the Inuit language.

“It’s not just a matter of connecting people within the territory, but offering a connection to the outside world, for unilinguals,” she said.

This could even include exchanges with other northern regions.

“We’re hoping to form alliances down the road, with the circumpolar world, for an exchange of programming,” DeWolff said.

Protection of the Inuit language is becoming more of a challenge, said Karliin Aariak, vice chair of TV Nunavut.

“There’s so much exposure to English,” she said.

With that, it’s become more important to “have a network to showcase who we are, to reflect on ourselves, to have the ability to express ourselves through TV or film, and to have an avenue to do it in our language.”