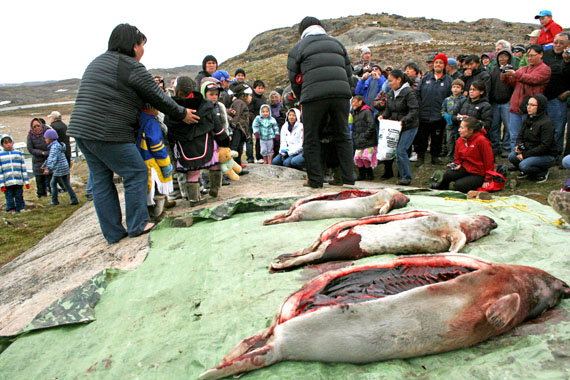 As well, the Aboriginal People’s Television Network plans a big event for Iqaluit on Saturday June 22 (the day after National Aboriginal Day): a day-long concert at the Arctic Winter Games arena.

The show, to be broadcast live on APTN and APTN HD along with a similar concert to be held in Winnipeg, will feature some of the biggest names in Inuit and Aboriginal music.

Madeleine Allakariallak of Iqaluit will co-host the Iqaluit performances with Don Kelly, a star of the APTN series Fish Out of Water.

In Winnipeg, Derek Miller and Michelle Thrush, star of the APTN series Blackstone, will co-host the main-stage performances.

The Iqaluit concert at the AWG is free and open to people of all ages.

The Iqaluit line-up will include:

• Leela Gilday: a passionate, soulful, singer-songwriter from Yellowknife. Her lyrics, reflective of her northern roots, embrace the essence of Dene life from an urban perspective;

• Saali: a singer-songwriter from Nunavik. His vocal range, passion for music, and gentle personality come together in a powerful performance;

• Saina: a Yakutsk singer from the Siberian region of Yakutia, who will take you on an enthralling journey back in time among the indigenous peoples of Siberia;

• Sinuupa: the stage name used by Etua Snowball of Kuujjuaq. His latest and third album Culture Shock was voted Best Rock CD by the 2012 Aboriginal Peoples Choice Music Awards; and

• Susan Aglukark: a celebrated singer-songwriter, she’s one of Nunavut’s best-known and honoured performers.

Free advance tickets are available for pickup at Northmart stores. Tickets are limited to four per person and do not guarantee admission.

Ticketholders will be asked to present their ticket at the AWG Arena on Saturday, June 22 starting at 5:00 p.m. and a wristband will be issued guaranteeing access to the celebration.

Doors to the concert will open at 7 p.m. and concert will begin promptly at 8:30 p.m. Seating is general and first-come, first-served.

You can also come and join the free barbecue presented by the local RCMP detachment outside the AWG Arena at 5 p.m. to 7 p.m.