“A model for promoting fraternity between nations” 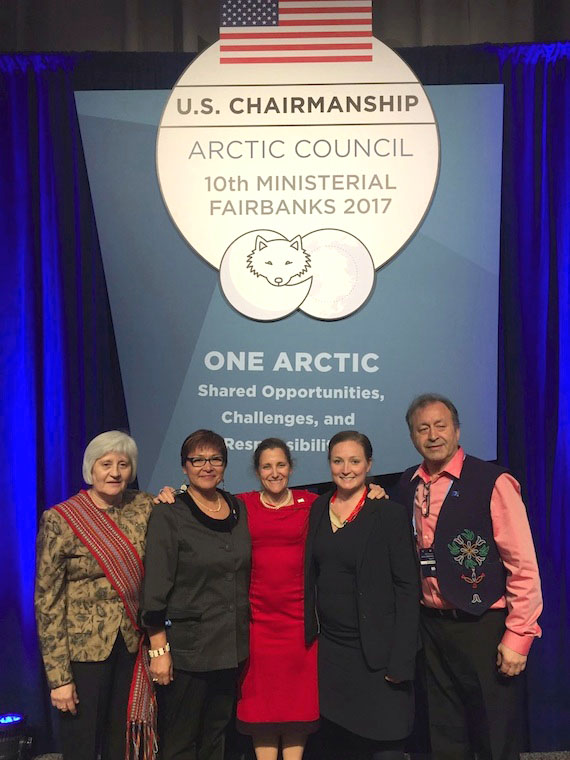 Diverse and international: Chrystia Freeland, Canada’s foreign minister (middle), stands under the emblem of the May 2017 Arctic Council ministerial meeting in Fairbanks, Alaska, with the Indigenous permanent participant organization leaders from Canada, including Okalik Eegeesiak of the Inuit Circumpolar Council (second from left) and Bill Erasmus of the Arctic Athabaskan Council (far right). “Together, the Arctic Council is working to support strong communities, including advancing Indigenous rights and resilience to climate change,” Freeland said after the meeting. (FILE PHOTO)

Nominations for the Nobel Peace Prize are generally kept under wraps until the short list of nominees for the prestigious award honouring “the best work for fraternity between nations” are announced in February.

But yesterday an international group of about 60 academics, who are members of a group within the University of the Arctic that studies geopolitics and security, circulated a letter Jan. 15 that nominates the Arctic Council for a Nobel Peace Prize.

“The Arctic Council remains a forum wherein all eight member states acknowledge and appreciate the impacts of climate change on human society and the environment, and are working in a united manner to mitigate and adapt to its consequences. This makes it exceptional,” said the signatories of the letter.

The competition for the prize is always intense. More than 300 nominations were received by the Nobel selection committee last year, according to information from the Nobel Peace Prize web page.

Since its creation in 1901 by the Swedish industrialist Alfred Nobel, the Nobel Peace Prize has been awarded to 104 people, such as Nelson Mandela in 1993 for “his work for the peaceful termination of the apartheid regime, and for laying the foundations for a new democratic South Africa.”

But organizations are also eligible and 27 have received the prize since 1901.

Those who signed the Arctic Council nomination letter praised the organization’s achievements as “a model for promoting fraternity between nations,” one of the major criteria for the prize, along with “the abolition or reduction of standing armies and for the holding and promotion of peace congresses.”

“In a time when facts have been challenged, diversity has been viewed with suspicion, and the value of international cooperation has been questioned, the Arctic Council has persevered in its work unabated,” they said.

“The Arctic region has always been a place where cooperation between and amongst groups was not only desirable, but in many cases necessary for survival. This philosophy has continued into the 21st century, where climate change, globalization, mass-scale utilization of resources, and narrow interpretations of geopolitics impose new challenges to the region.”

Last year, the prize went to the International Campaign to Abolish Nuclear Weapons “for its work to draw attention to the catastrophic humanitarian consequences of any use of nuclear weapons and for its ground-breaking efforts to achieve a treaty-based prohibition of such weapons.”

In favour of the Arctic Council’s nomination, the signatories of the nomination said the circumpolar body, established in 1996, had “exceeded all expectations.”

“Amongst its achievements are promoting and maintaining peace and political stability in the rapidly-changing Arctic region; including Indigenous peoples, scientists, and non-governmental organizations, in addition to governments, in its work; and enacting measures that protect the Arctic environment, including mitigating the impacts of climate change. The Arctic Council provides a model for regional governance and deserves to be recognized for its success,” they said.

The Arctic Council also recognizes Indigenous people as permanent participants, not as token members, but as “powerful and valued members with real influence on the council’s work and direction,” they said.

The nominators listed the many Arctic Council achievements as a leader in climate change, such as its 2004 Arctic Climate Impact Assessment and the 2017 Agreement on Enhancing International Scientific Cooperation, which will make it easier for scientists to travel, bring their equipment across national borders, conduct studies and experiments, and share their research and expertise on Arctic issues.

“What is noteworthy about this achievement is that it was co-chaired by the United States and Russia at a time during which relations were otherwise strained,” they said.

In 2007, Inuk activist Shelia Watt-Cloutier made it to the Nobel Peace Prize nomination short list for putting an Indigenous face on the effects of climate change.

As president of the Inuit Circumpolar Council, Watt-Cloutier represented Arctic Indigenous peoples during the negotiations that resulted in the Stockholm Accord, banning certain organic pollutants that can cause cancer, infertility and brain damage among people and wildlife.

In the end, former United States vice president Al Gore and the Intergovernmental Panel on Climate Change split the award, which is worth about US$350,000.

The Nobel Committee said the decision was to recognize “their efforts to build up and disseminate greater knowledge about man-made climate change.”