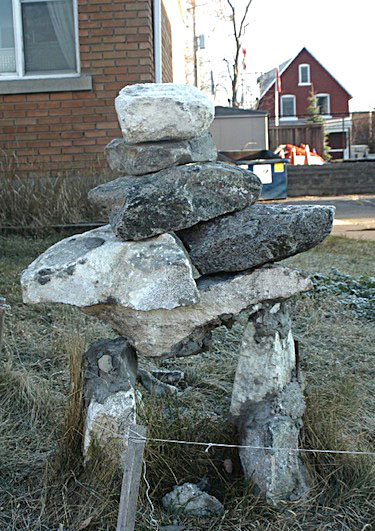 This photo from the 2009-10 annual general report of Tungasuvinngat Inuit shows an inuksuk standing in front of one of the buildings owned by the Ottawa-based community centre for Inuit.

In this suit, Hare alleges the organization dumped him from his job this past June because he’s a member of the wrong race.

“No one in the community appears to know anything about what happened, including the TI staff,” said a written communication to Nunatsiaq News from a person described as “an extremely concerned member of the urban-Ottawa-Inuit community.”

Since then, TI’s annual budget has expanded from $700,000 to about $7 million, Hare’s court filings state.

“He had a clean performance and disciplinary record,” said Hare’s statement of claim, filed at the Ottawa courthouse this past September.

Founded in 1987 to provide social support to Inuit residents of Ottawa, TI expanded under Hare’s direction to offer a wide range of programs to Inuit, including youth projects in Montreal, Edmonton, Winnipeg, Yellowknife and St. John’s.

The agency employs about 50 workers, 85 per cent of whom are Inuit. It’s governed by an all-Inuit board.

A TI annual report said another program, the Mamisarvik Healing Centre, provided therapeutic activities to 1,090 Inuit, in 2009-10. These include clients sent there by the Government of Nunavut.

“TI is now working with urban Inuit communities across Canada to help them in their own cities. TI’s successes demonstrate there has been increased capacity among urban Inuit to administer and manage their own affairs,” said an evaluation published by INAC in May 2010.

Despite this evidence, Hare came under attack in February 2011, when a new vice-president was elected to TI’s board, Hare alleged in a statement of claim filed this past October.

Though she is not named in the lawsuit, that new vice-president is Heather Ochalski, who helps run a website called Igloo Talk.

Hare alleges in his lawsuit that the new vice-president was intent on removing him from his job because of his race.

“Moreover, it also became clear that the Vice-President wanted to remove the Plaintiff from his role because he was Native American and not Inuit,” Hare’s lawsuit alleges.

To support this allegation, Hare’s lawsuit cites a post on an online forum by Ochalski about a year earlier that said “should Inuit organizations start hiring Inuit Executive Directors?”

Hare’s lawsuit also alleges the vice-president made “unfounded allegations” against him that were “reflective of the Vice-President’s discriminatory views.”

Other allegations state that Hare was excluded from important meetings and that his performance was micro-managed and criticized.

“He further states that he faced this harassing and discriminatory treatment because of his Native American status,” Hare’s lawsuit alleges.

Because of this, TI’s conduct breaches two sections of the Ontario Human Rights Code, Hare alleges.

In their statement of defence, filed this past Oct. 27, TI’s lawyers partly respond to Hare’s allegations with a victim narrative: that Hare “took advantage of an unsophisticated” board and persuaded them to grant salary increases to him and other employees that they were not aware of.

“In doing so, he secured compensation increases for himself, the extent of which the Board did not fully appreciate,” TI’s statement of defence said.

TI also alleges Hare failed to communicate effectively with its board, which in early 2011, “became more focused on its role and responsibilities.”

Because of this TI alleges Hare should not have been surprised at his termination.

In reply, Hare’s lawyers said TI’s allegedly “unsophisticated” board has included members such as:

• Victor Tootoo, an accountant who served as assistant deputy minister of finance with the GN;

Hare’s lawyers said Hare met routinely with the TI president in advance of board meetings and followed the president’s direction with respect to the level of information he provided to the board.

Hare’s statement of reply also said no TI board member ever asked him to adjust the level of detail in the information he provided to them.

A recently-posted job advertisement states TI’s next executive director should have at least eight years of management experiences at a non-profit aboriginal organization plus a university degree or the equivalent.

The ad doesn’t state a salary but says preference will be given to “qualified Inuit candidates.”

The “anticipated start date” for a new TI boss is given as “early January 2012.”

The allegations made in Hare’s statement of claim, TI’s statement of defence and Hare’s reply have yet to be proven in court. The dispute remains unresolved.

(Comments on this story are now closed)