“A lot of the smaller companies aren’t able to think longer term; they have to think survival” 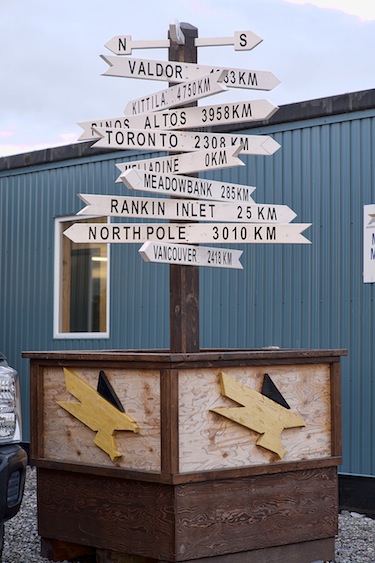 This signpost at Agnico Eagle’s Meliadine gold mine project shows how far the central Nunavut site lies from other places where Agnico Eagle does business. (PHOTO COURTESY OF AEM) 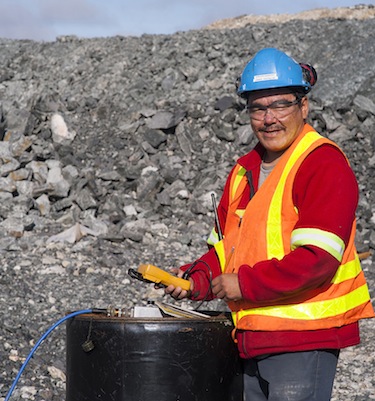 For Agnico Eagle, workers like environmental Technician Jamie Kataluk, who works for Agnico Eagle, are part of the key to tapping into Nunavut’s mineral potential. (PHOTO COURTESY OF AEM) 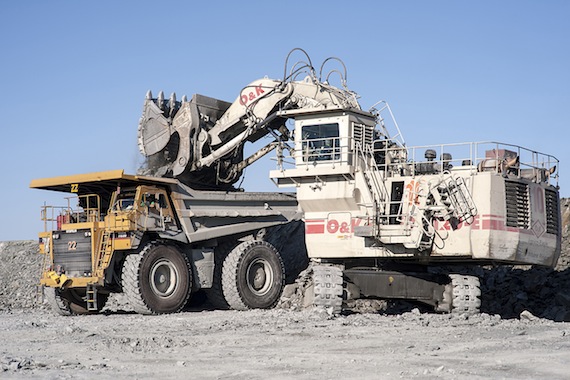 A haul truck gets loaded up with rock at Agnico Eagle’s Meadowbank gold mine near Baker Lake. (PHOTO COURTESY OF AEM)

Nunavut’s mining future looms large on the horizon — but just how large?

If you ask Sean Boyd, the president and chief executive officer of Agnico Eagle Mines Ltd., he’ll tell you Nunavut has lots of potential.

But to tap into this potential and be a good mine-builder, you need know-how, persistence and a long-term vision.

“We’re very encouraged where we are right now,” Boyd told Nunatsiaq News. “We believe that we have the foundation, whether it’s a mineral deposit, physical infrastructure or people and skills to build a long-term business in Nunavut.”

But how to “unearth the potential” remains the question still facing many participants at the 18th annual Nunavut Mining Symposium in Iqaluit April 13 to April 16.

That turning point came with the discovery of the Amaruq deposit, 50 kilometres north of Baker Lake, where in one season of drilling, Agnico Eagle’s exploration team found 1.5 million ounces of gold resources, with double the grade of Meadowbank’s deposits.

And grade is “pretty much everything when you’re dealing with a remote location,” Boyd said.

That’s because a high-grade deposit gives you the added revenue necessary to manage costs of doing business in Nunavut, he said.

This year Agnico Eagle plans to conduct more drilling at the seven-km-long Amaruq deposit which could someday become an extension of Meadowbank, adding to the lifespan of that mine.

“That’s why we’re in Nunavut,” Boyd said. “It’s not just to build Meadowbank — our major focus is to find parts of the world where you have a lot of mineral potential.”

Agnico Eagle takes a multi-decade view in what’s undeniably a risky business, Boyd said, adding that Nunavut’s potential wouldn’t be realized if the company didn’t have diligent, competent people on the ground.

The company still needs to find more resources to make a call on the potential of its Meliadine gold project, 25 km from Rankin Inlet, he said.

To justify the $911 million investment needed for Meliadine’s infrastructure, Agnico Eagle wants to ensure the company gets a return of 15 per cent on investment.

Right now, that figure stands at only 10 per cent, Boyd said, so the company plans to re-evaluate exactly how much gold can be added from Meliadine’s resources to its known reserves of 3.3 million ounces of gold.

If the numbers work, Boyd said the plan remains to approach Agnico Eagle’s board, likely in 2016, about proceeding with the mine.

For now, the low Canadian dollar and cheap oil are helping the company’s finances.

But Boyd said it’s not easy for many of the junior mining companies who are looking to develop Nunavut’s mineral potential.

The overall economics of mineral and mining exploration suggest a tough year lies ahead for mineral exploration companies in Nunavut, although Natural Resources Canada has forecast a 20 per cent increase in spending in Nunavut for 2015.

At the mining symposium, various companies plan to give updates of mining and mineral exploration projects from around Nunavut.

But missing from the list of updates is Baffinland Iron Mines Corp.’s massive Mary River iron project on north Baffin.

Greg Missal, Baffinland’s vice-president, corporate affairs, said April 9 that he’s hoping to attend the mining symposium but was not 100 per cent sure he can make it.

Missal said his company is sending someone to speak as part of a geology workshop, but a scan of the symposium schedule makes no mention of Baffinland, except as a sponsor for the art market.

During a recent interview, Missal said he is disappointed in an April 9 Nunavut Planning Commission decision, which will prevent Baffinland from shipping iron ore from its Mary River mine out of Milne Inlet during the winter ice season.

“I don’t think you need to look too hard or far to see that there are far fewer exploration companies that are doing work in the territory. Really, the Mary River project is almost an anomaly, in terms of it being developed at a time when there’s not a lot of mining and exploration happening,” he said.

Baffinland plans to go ahead with shipping ore from its Mary River site during the open water season this summer, Missal said, and in the meantime will consider options to expand its shipping season that comply with the North Baffin Regional Land Use Plan.

This year’s symposium trade show, held at the Frobisher Inn, will be open to the general public April 15 for two hours, between 1 p.m. and 3 p.m..

You can find more information on the Nunavut Mining Symposium 2015 website.

With files from Jane George, Lisa Gregoire and Thomas Rohner