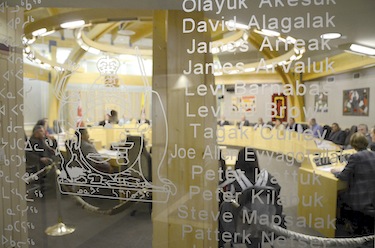 In the committee of the whole Sept. 17, Nunavut MLAs discuss Bill 40 which creates a representative for children and youth office in Nunavut. (PHOTO BY DAVID MUPRHY)

The United Nations children’s welfare agency, UNICEF, says it applauds the Government of Nunavut’s efforts to advance the well-being of children Sept. 18.

That praise came after Nunavut’s Bill 40 received assent Sept. 17 by Commissioner Edna Elias to create a Representative for Children and Youth for the territory — after many delays and years of deliberation.

“The independent representative for children and youth will work to ensure that the rights and interests of children and youth are recognized and protected and that their views are heard and considered in the actions of the government,” UNICEF, which has saved more children’s lives than any other humanitarian organization, said in a statement.

The new act recognizes that Inuit societal values will inform “a holistic understanding of the best interests of children and youth within healthy families and build on the strengths of Inuit families and communities,” UNICEF said.

Among the seven Inuit societal values set out in the proposed legislation is Tunnganarniq, which is described as “fostering good spirit by being open, welcoming and inclusive.”

This value would require the representative to, among other things, ensure that government considers the views and best interests of children and youth in all government decisions concerning them, UNICEF noted.

“In many respects, this legislation can serve as a model for other jurisdictions in Canada and worldwide. This Bill will benefit the children and youth of Nunavut for generations to come as it simultaneously advances universal children’s rights and is culturally-sensitive to Inuit societal values,” UNICEF said.