KRG eyes renovations, other changes to some Nunavik airports 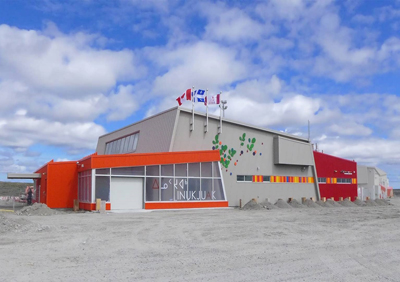 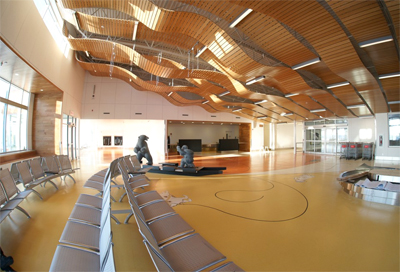 KRG’s transport department is in talks with Transport Canada about installing a CATSA screening station in its Puvirnituq airport terminal. (PHOTO COURTESY OF FGMDA)

KUUJJUAQ—Transport Canada has agreed to look into installing a security screening station in the Puvirnituq airport, the Kativik Regional Government said last week.

The KRG, which manages the region’s airports, has been asking the federal agency for years to install a Canadian Air Travel Security Authority (CATSA) security screening station in the airport in Puvirnituq, the transportation hub for Nunavik’s Hudson coast.

The presence of CATSA in Puvirnituq would mean flights departing the Hudson coast community en route to Montreal wouldn’t have to stop and disembark passengers for screening in La Grande.

As home to the Inuulitsivik Health Centre, Puvirnituq is the medical hub for Nunavik’s Hudson coast communities, making it the base for many medical travel trips to the South.

“Since then, we’ve had meetings with both Transport Canada and CATSA to gather information to determine if we will be able to have CATSA in PUV.”

It’s not a go-ahead, but it’s a step forward from previous communications with the federal agency’s security division. Transport Canada denied the request in 2013.

Puvirnituq’s airport was most recently renovated in 2012 and is already fitted with the space needed to put in a screening station.

If CATSA agrees to install the station, Puvirnituq will be the third airport in Nunavik with screening facilities, after Kuujjuaq and Kuujjuaraapik.

South along Hudson Bay, the neighbouring community of Inukjuak is having issues with its new airport terminal.

The airport is now in operation, but the KRG’s transport department says there are “major deficiencies” with the building, built by Quebec firm Pépin Fortin.

The department said the biggest issue is water filtration in the lower level of the building. That’s due to a leveling issue on the property; there’s a slope from the apron to the terminal which could result in water accumulation around the baggage door, Whidden said.

“The contractor came back to the site last November to fix some issues,” Whidden told KRG councillors Feb. 24.

“However, many issues will have to wait until next summer, when the temperature will go up and the snow melts.”

But Whidden said the problems haven’t had an impact on day to day operations.

Better luck for the Kuujjuaq airport in 2017

The Kuujjuaq airport faced a few hiccups at the end of 2016, KRG councillors heard last week.

The area has been closed for now until renovations can be done in the summer of 2017, Whidden said.

That meant First Air and Air Inuit had to tweak schedules to operate during the daylight hours.

“The ground crew in Kuujjuaq worked around the clock to repair the situation and maintain operations,” Whidden said.

The good news: Transport Canada may have funding to do upgrades at the Kuujjuaq airport terminal this year. The work would include lengthening the baggage belt, installing computer tables in the waiting area and created a dedicated area for elders.