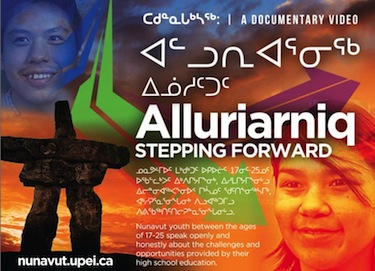 A poster for “Alluriarniq — Stepping Forward: Youth Perspectives on High School Education in Nunavut” which screens May 30 in Iqaluit and can be downloaded online.

If you’re interested in education in Nunavut, then head to Iqaluit’s Astro Theatre May 30 at 4:30 p.m. to watch the premiere of “Alluriarniq — Stepping Forward: Youth Perspectives on High School Education in Nunavut.”

The 32-minute film offers insight from Inuit youth between 17 and 25 living in Kugluktuk, Rankin Inlet, Pangnirtung, and Ottawa, as they speak openly about their experiences in high school in Nunavut.

If you can’t make it to the screening, you can also watch the film online at here.

The documentary film, with interviews conducted in English, offers insights about how high school education has affected the lives of Nunavut youth, said Kerri Wheatley, project manager for Inuit Education in Nunavut at UPEI.

Topics, such as the importance of the Inuit culture and language, peer pressure, the impact of teachers, and the challenges of post-secondary education, are explored as the youth share their perspectives on education.

Free copies of the film in Inuktitut and English will also be available at the film screening.

“We put a really strong emphasis on putting out a product that is accessible to the community,” Wheatley said.

Produced by award-winning producer, Mark Sandiford of Beachwalker Films, the documentary is the product of a research partnership with the Coalition of Nunavut District Education Authorities, Nunavut’s department of Education, and the UPEI’s education faculty.

In the film, youth talk about the importance of Inuit culture, language loss, peer-pressure, experiences after leaving high school, teachers, post- secondary education, as well as their hopes for the future, Wheatley said.

The free screening in Iqaluit is part of several different events taking place around the second Nunavut Master of Education convocation of 13 Inuit students, which is planned for June 1 at 2 p.m at Nakasuk Elementary School in Iqaluit, where Nunavut Premier Eva Aariak and the president of the University of Prince Edward Island, Alaa Abd-El-Aziz, will hand out diplomas.

The Nunavut Master of Education program is done through a partnership with the University of Prince Edward Island.

Following the June 1 convocation ceremony, where two elders, Rhoda Karetak and Donald Uluadluak, will receive honorary doctorates, graduates will present their research at a public research symposium June 2 at Nakasuk from 1:30 p.m. to 4:30 p.m..

“There will soon be 36 Inuit MEd graduates in Nunavut and UPEI has helped to change the face of education in the territory. The Certificate in Educational Leadership in Nunavut is ongoing and four courses will be offered in early July in Rankin Inlet, Nunavut,” UPEI’s website said.

“Offering two programs in an Inuit context in the Canadian Arctic requires a great deal of time, careful negotiation and flexibility.”

Two elders and 13 students will receive advanced degree diplomas June 1 in Iqaluit from Nunavut Premier Eva Aariak and the president of the University of Prince Edward Island, Alaa Abd-El-Aziz. (PHOTO COURTESY OF UPEI)