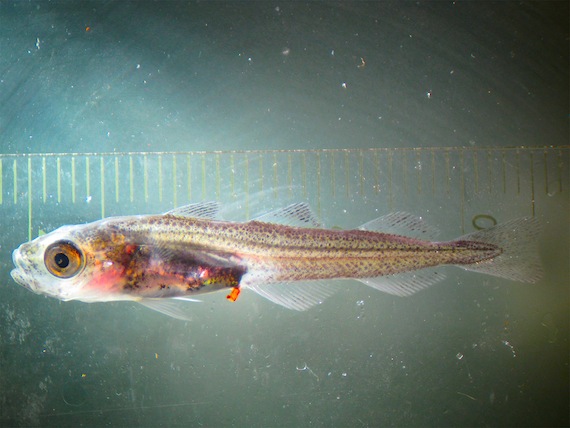 Last year, the Vancouver Aquarium brought back some baby Arctic cod to raise — that went well, but this year the aquarium was back north to fetch some adult cod and talk to the Pangnirtung fish plant about its “ocean wise” program. (FILE PHOTO)

The Vancouver Aquarium is working with the Pangnirtung fish plant to help the Nunavut fish processing plant become an “Ocean Wise”-labeled business.

This means the fish processed at the plant would become part of a conservation program that attempts to educate consumers about sustainable seafood.

The program involves labeling products with the “Ocean Wise” symbol, “an assurance that the item is a good choice for keeping ocean life healthy and abundant for generations to come, the Vancouver Aquarium’s website says.

“That’ll open up a lot of markets for that fishery in southern Canada,” said Eric Solomon, director of Vancouver Aquarium’s Arctic programs.

Ocean Wise, which has more than 450 participating members in Canada in more than 3,100 locations, works with restaurants, markets, food services and suppliers to give them current scientific information about seafood and help them make “ocean-friendly” buying decisions.

The next step is to determine whether Pangnirtung char comes from a sustainable fishery, and to help the fish plant there get recognized for that, Solomon said.

“In Pangnirtung, my goals were to begin to introduce myself and to get to know the community,” Solomon said of his recent visit to Pangnirtung where he spoke with plant staff and others about how to recognize the local char fishery as a sustainable fishery.

Now, the aquarium needs to “make sure that the catch methods and all of that are good sustainable practices.”

The aquarium will also need information on fish stocks and data on where each fish is caught, to help get the char to southern markets where it will be sold as a sustainable fish product.

But sustainability isn’t just about the environment: it’s also about people needing jobs that are sustainable, Solomon said.

“That’s where the Pangnirtung fisheries relationship will continue to grow,” he said.

Soloman also stopped in Cambridge Bay where he collected live Arctic cod and sent the fish back to the aquarium in Vancouver.

This is the second year the aquarium has sent live cod south, with last year being the first time this was successfully done in North America.

The six live cod sent to Vancouver last year have since reproduced.

“Last year was about figuring out how to do that. This year, it’s to do it again and allow a bunch of research [to happen at various life stages],” Solomon said.

This year’s trip was made because the aquarium needed more adult cod, Solomon said.

But, as it’s no simple task to transport live fish back to Vancouver, this may be the last time the aquarium’s staff will head north for cod.