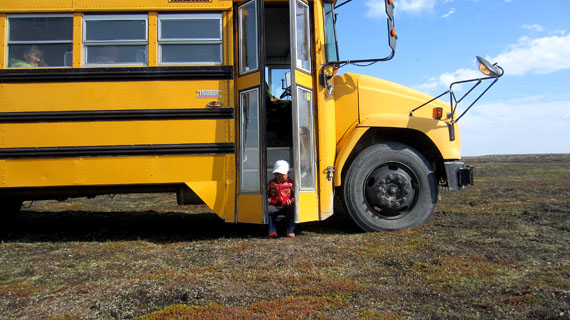 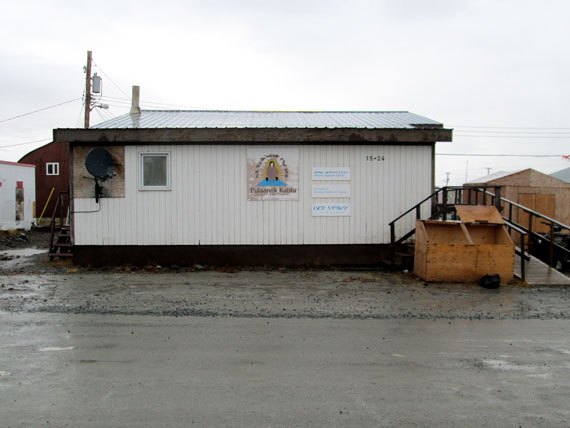 Rankin Inlet’s school bus service provider, the Pulaarvik Kablu Friendship Centre, was set back by more than $17,000 in repair bills in September after vandals trashed all three of its buses in separate incidents.

“All we’re left staring at right now is the repair bills, which are horrendous,” said George Dunkerley, executive director of the friendship centre.

“This puts us in a really big hole. We don’t have funding to cover these kinds of damages,” he said. “So our school busing project is going to suffer a pretty big loss by the end of this year.”

Vandals struck twice, most recently in mid-month, when the centre’s largest bus was smashed while parked at the Toromont garage for servicing.

The final repair bill on the 72-seater came to $16,000 for fixing several windows, the door, the hood and front grill. The bus went back into service Sept. 23.

The repairs added to damages on Pulaarvik’s two other buses, a 54-seater and a 36-seater, which had been hit by vandals on Labour Day weekend.

The smallest was put out of service after unknown trespassers emptied two fire extinguishers in the back of the vehicle and pulled wires out of the dashboard, Dunkerley said. Schools had to cancel charter trips for cultural and land experience programs as a result.

Vandals also ripped up seats in the larger vehicle that weekend. Repairs were underway Sept. 27, Dunkerley said. The smaller bus replaced the larger one on the school circuit throughout the month.

“It does slow the guys down quite a bit, because obviously they can only put 36 students on it instead of the 54.”

Dunkerley expects the last repair will amount to about $1,400.

The damages will not affect any of the non-profit community organization’s regular programs, he said, but the centre will now have to do without for extra one-off projects, such as food baskets for the needy.

On top of the vandalism, the centre also had its all-terrain vehicle stolen the weekend of Sept. 7. That vehicle had been stolen and retrieved twice before, said Dunkerley.

Vandalism is a fact of life in the community, but the Friendship Centre’s experience over the past month is unusual, the director said.

“There’s always been times in the year where we’d have a two-week run of vandalism then it would kind of die off for a while,” he said. “This year’s been worse than any I can remember.

“It’s almost a daily occurrence now, where something is getting broken or Hondas (ATVs) are being stolen, or trucks or buildings are being vandalized. It’s just been really, really bad.”

The centre has since installed a “low-light” camera security system to keep watch, a pricey, but relatively small investment to make compared to $16,000 bus repairs, Dunkerley said.

The centre has provided school bus service for the community for the past 12 years, and the current contract ends when the school year closes.

“To suffer these kinds of losses, even from a business aspect, it would be pretty questionable as to whether you would want to do it again.”

Rankin Inlet mayor, Robert Janes, agreed that vandalism in the community is “fairly consistent,” with occasional flare-ups, “but I don’t think it’s really more than it’s ever been,” he said.

“I know about the bus incident, but that’s very isolated,” he said Sept. 27.

“It’s just an unfortunate situation that the Pulaarvik Kablu actually got hit and that damage was done, and I feel bad for them because it’s a school bus.”

Rankin Inlet North MLA Tagak Curley took the issue to the Legislative Assembly in Iqaluit on Sept. 6, calling it an “epidemic.”

“That’s Mr. Curley’s opinion,” said Janes. “We did have a few incidents where Hondas were taken and stuff, but as soon as the RCMP got a grip on it and got that under control, we haven’t had any major problems since then at all.”