“It’s been a long and difficult, detailed and serious case, and now of course we move towards its conclusion” 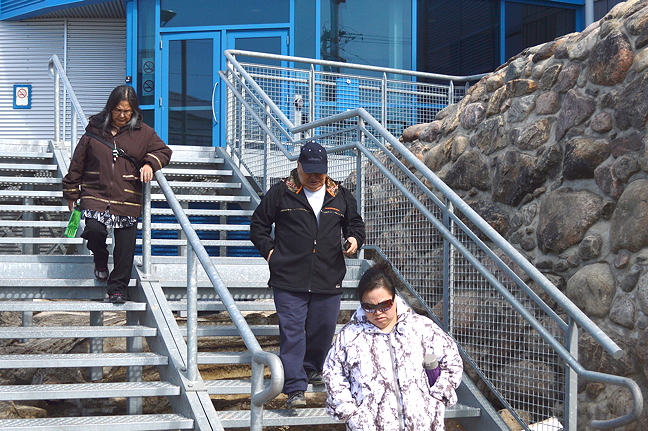 Johnny Meeko, an ex-teacher from Sanikiluaq, leaves the Nunavut Court of Justice in Iqaluit May 30. A long-awaited verdict on 32 historical sex-related crimes with former students is expected this fall. (PHOTO BY STEVE DUCHARME)

A final verdict ending nearly five-years of courtroom litigation over alleged historic sex crimes by former-Sanikiluaq teacher, Johnny Meeko, will be read on Sept. 14, Justice Neil Sharkey announced at the Nunavut Court of Justice, May 30.

Sharkey opened court for a special sitting, following Meeko’s decision to abandon his application to re-open his trial on May 29, citing logistical hurdles.

Meeko’s decision to abandon the application paved the way for a final verdict, which is expected to conclude a trial that effectively ended in 2015.

The 62-year-old Meeko stands accused of 32 sex crimes, ranging from sexual groping to rape, and related to his decades-long tenure as a teacher on the Belcher Islands between 1978 and 2007.

Sharkey told lawyers that he would need the summer to revisit the details of Meeko’s trial.

He added that the “systemic delays,” which—while perhaps unavoidable— nevertheless require the court’s urgency given the nearly two years that have passed since final arguments were heard in December 2015.

“While I will need the summer to write my decision, I nonetheless do feel the need to move forward in some dispatch,” he said.

“It’s been a long and difficult, detailed and serious case and now of course we move towards its conclusion.”

While Sharkey gave a complete timeline for Meeko’s litigation for the public record, he noted that most of the court processes were “unremarkable” given the historic nature of Meeko’s offenses.

But two events caused the court to either re-visit Meeko’s pre-trial hearings or outright delay the trial’s verdict, as new information or evidence continued to inhibit proceedings.

Meeko’s trial was pushed back into 2015, when two additional complainants came forward and forced a second preliminary inquiry near the end of 2014.

And last Spring, after Meeko’s trial had ended, Sharkey said both the Crown and Meeko’s lawyer, James Morton, asked him to delay his verdict pending the possibility of new evidence.

“I was not given any details respecting the nature of this prospective evidence but I was further advised that the RCMP major crime unit was looking into this late development and would need some time to consider their investigation,” he said.

“The new information is a letter received by defense counsel in which an individual alleges being asked to falsely claim sexual abuse by Johnny Meeko. The purpose of the falsehood, according to this individual, was to receive money,” Meeko’s application to court said, Dec. 22.

But efforts to prove that ultimately fell flat when witnesses subpoenaed by the court were unable to come forward, Morton told Sharkey, May 29.

“I respect the fact that the application to re-open the case was one made on good grounds and in good faith by the defense. However at the end of the day, the calling of this testimony… was something beyond counsel’s control,” Sharkey noted in his statement.

Sharkey said he did not fault Meeko for the delays, but noted he will “have to start at square one” to consider a verdict, acknowledging that, complainants, members of the public and families of those involved deserved an update from the court.

“Because however this case has taken a considerable time to get to this point, I feel it appropriate to address why things took so long,” Sharkey said.

Sharkey added that the court would accommodate complainants and victims who want to be present when the verdict is read in September, either in court or through telephone or video conferencing.