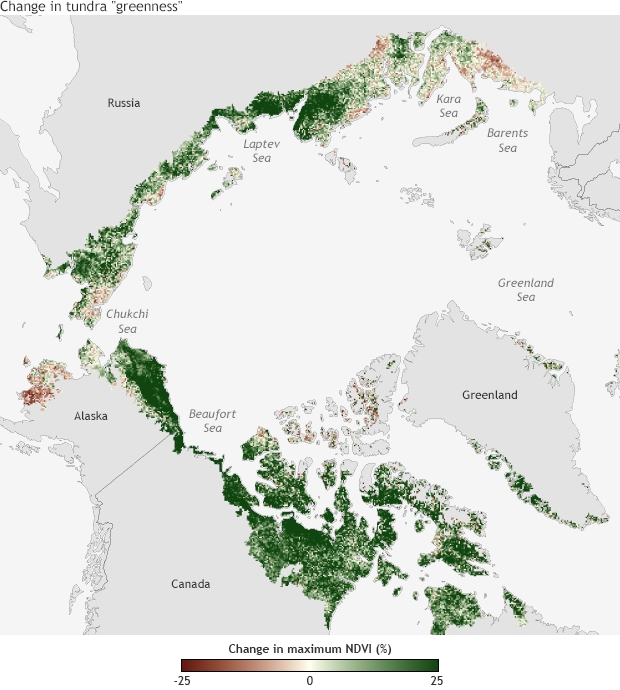 This map shows areas where the rate of greening has increased since 1982, with denser vegetation and the spread of taller shrubs. (NOAA HANDOUT IMAGE)

The impacts of a warming climate in the Arctic are changing the ranges of plants and animals in the sea and on the land, according to this year’s report on the Arctic by the U.S. National Oceanic and Atmospheric Administration.

Released this month, the report sums up the work of an international team of 147 scientists from 14 countries.

The Arctic Report Card for 2013 is the NOAA’s seventh annual scientific summary on the state of the Arctic environment, relative to historical records that reach back to the 1970s. (See video embedded below.)

Although snow and ice cover for 2013 did not hit any new record lows, as it did in 2012, the “effects of a persistent warming trend that began over 30 years ago remain clearly evident,” the report said.

“The impacts of the warming climate on the physical environment during those 30 years are influencing Arctic ecosystems on the land and in the sea.”

Plant growth on the tundra throughout the Arctic Circle is expanding, and the growing season has increased steadily over the past 30 years in Eurasia and North America, with a marked acceleration in western North America since 2005, the report said.

“Although the length of the tundra growing season varies from place it has increased by an average of more than nine days per decade during the satellite record,” NOAA researchers stated in a press conference, Dec.12, headed up by Martin Jeffries, principal editor of the report.

“Much of the greening trend in the Arctic is occurring in the more southern tundra regions, and this is likely associated with the expansion of tall shrubs,” researchers said.

Researchers found muskox numbers have been stable or increasing since the 1970s, while caribou and reindeer herds “have unusually low populations for the period 1970-2013,” their report says.

Changes in fish and bottom-dwelling sea life are more obvious. Many species have been migrating north, the report says, and this is linked to declines in sea ice cover, due to a warming climate.

“Clear across the Arctic Ocean in the Canadian Beaufort sea, recent fish surveys have added at least a dozen, primarily benthic (bottom-dwelling) species to the Canadian Arctic fauna,” which were normally found in seas to the south, researchers said.

Sea ice extent in the summer of 2013 ranked as the sixth smallest since observations began in 1979, the report said. Last year’s extent set a record low, and the past seven years had the smallest ice extents on record.

Summer temperatures across the central Arctic Ocean, Northern Canada and Greenland were colder than the overall average since 1981. Despite this, the overall trend of decreasing ice surface continues. One NOAA researcher described 2013 as “another year” in the “new normal” of reduced Arctic sea ice.

Snow extent across the Arctic was below average for the spring months of April to June.

“Some would already say this has already happened, that the Arctic has shifted to a new normal.”