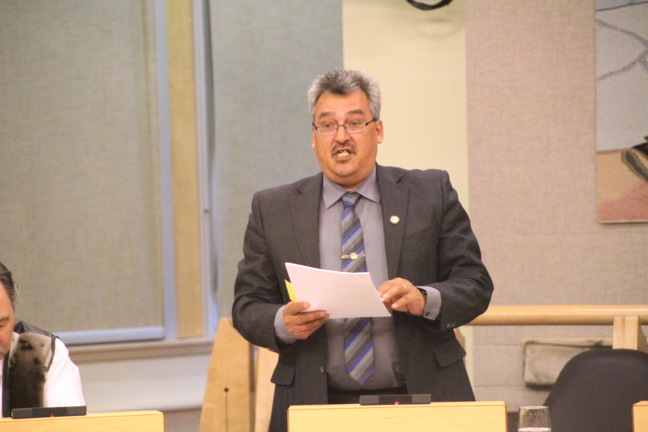 Baker Lake MLA Simeon Mikkungwak asks Nunavummiut, June 6 in the Nunavut legislature, to be cautious about what they post publicly on social media. (PHOTO BY BETH BROWN)

Baker Lake MLA Simeon Mikkungwak used his member’s statement at the legislature last week to make a public service request: The next time you update your Facebook status or send out a tweet, please practice safe posting.

“As our society becomes more technologically advanced, we also become more vulnerable in a number of ways. With the advent of cyberbullying and live streaming, it is now more important than ever for us to practice safe and responsible Internet use,” Mikkungwak said in his June 6 statement.

His warning comes following a few troubled incidents this spring—one involving an RCMP shooting and the other a school bomb scare—where social media played a role.

While social media allow people in Nunavut to connect with loved ones, share with their communities, sell and swap items and advertise local events, Mikkungwak told Nunatsiaq News later that he is concerned some users don’t realize their posts could be “borderline slanderous” or even considered “defamation of character or libel.”

“Anyone could access what you put on social media,” he said. “There were [posts] that I felt that were harmful for some Nunavut people to see.”

Early in May, a man in Hall Beach died following a firearms-related confrontation with the police. Before his death, the 39-year-old man posted on his Facebook page “I hope you watch this suicide by cop.” The Facebook account has since become a memorial page.

Mikkungwak’s statement also pointed to the importance of checking your online privacy settings.

“I would like to remind our viewers that any statements that we may post on the Internet will not be private and may represent how the world perceives us indefinitely,” he said, urging people to “think hard” about potential consequences before posting comments, photos, or videos online.

In April, a Coral Harbour teacher had his contract terminated after he briefly posted an altered image of an ISIS beheading on a community Facebook page.

In the photo, the teacher replaced the head of American journalist James Foley with his own face and added a photo of a local woman, with whom he had previously been involved, beside the executioner.

The photo caused concern among parents and led to rumours of a bomb threat in the community.

An Internet safety guide from the Nunavut Teachers Association states, “don’t post information, comments or pictures that would be embarrassing if they appeared on the front page of a newspaper.”

Mikkungwak asked for the Government of Nunavut and the RCMP to increase efforts, “to educate the public on how to use the Internet and social media in a safe and responsible manner,” but he said he recognized they have limited control over a person’s behaviour online.

He also asked people in Nunavut to report harmful content to site administrators.

“I encourage all Nunavummiut to remain vigilant in keeping our communities safe in both the physical and virtual worlds,” he said.