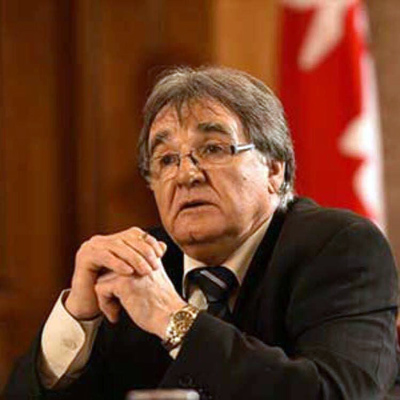 Charlie Watt speaks to a committee meeting in Ottawa. The long-time federal Senator plans to step down from that role, with the hope of returning to head the organization he helped found in the 1970s. (HANDOUT PHOTO)

When Charlie Watt says he’ll bring extensive experience with him to the role of Makivik Corp. president, he’s not exaggerating.

Watt actually founded the Nunavik organization in the late 1970s—first established as the Northern Quebec Inuit Association and later as Makivik—and has served over 30 years as a senator.

But his long career in Ottawa will soon see its end; Watt, 73 said he gave notice to Prime Minister Justin Trudeau last month that he plans to step down from his role in the Senate in 2019, since it’s mandatory for senators to retire at age 75.

That could happen even sooner if Watt is elected as Makivik’s new president on Jan. 18—a role he’s held twice before, though not since the mid-1990s.

In many ways, Watt’s work and political goals haven’t changed.

“Over the last 30 plus years, I’ve been battling the legislatures [in both Ottawa and Quebec] to ensure they uphold our treaty rights,” Watt said.

“There are a lot of things related to the [James Bay and Northern Quebec] agreement that are left up to interpretation.”

If he’s elected as Makivik’s president next week, Watt said he’ll work with both levels of government to revisit funding formulas for the region, in effort to come up with something more “tangible” for services in the region.

“Housing, in particular, has always been an issue,” said Watt, pointing to ongoing negotiations with the federal government to not only renew its funding agreement, but also to convince Ottawa to pay for additional housing.

“We’re always trying to keep up with the increase of population and their housing requirements.”

Another big piece of Watt’s campaign is a push for greater self-determination; Watt hopes Nunavimmiut are ready to revisit the discussion towards self-government.

Governments have jurisdiction in places they shouldn’t in Nunavik, Watt said, like over the region’s renewable resources, a sector that has great cultural and economic weight for Inuit.

But a southern government doesn’t hold the same values, Watt said, and can’t understand the cultural significance of the region’s wildlife.

Wildlife can and does play an important role in the region’s economy, through local harvesting and some regional commercial activity.

But a species like the caribou has been “micromanaged” by government officials, Watt said.

And climate change has already had repercussions on the region, but governments tend to be slow to react, he added.

Beavers for example are now common around Kuujjuaq and even as far north as Tasiujaq, Watt noted.

When they build dams, it has interfered with the migration of the speckled trout and even char in the region’s water systems. But Watt said the province is slow to see and respond to these changes.

“We need to raise that as an issue and hopefully the government will see the importance of it,” he said. “They could help financially.”

In the same vein, Watt said governments impose their own approaches to social regulation in the region, using the example of Quebec’s Youth Protection Act.

“We’re taking kids from their homes and it’s destroying families,” he said. “What we’re going to have to do is challenge the entire act.”

In fact, the Nunavik Regional Board of Health and Social Services has already spearheaded an effort to revise and redesign the region’s youth protection services, with the goal of better adapting those services to Inuit communities.

Watt said Makivik could play a role in empowering communities to develop their own response to social issues that lead to family interventions.

“We’re quite capable as Inuit to put up these infrastructures ourselves,” he said. “What we need is to create our own assembly to address these issues as a region.”

The same holds for issues of Arctic sovereignty, Watt noted; Inuit across Canada and the circumpolar world need to be able to represent themselves as one nation.

Watt, who is still based part-time in his hometown of Kuujjuaq, was a founding president of the Northern Quebec Inuit Association in 1972, which eventually became Makivik.

Watt was appointed to the Senate in January 1984 by then-Prime Minister Pierre Trudeau.