“We do not consent” video supports Nunavut Supreme Court fight 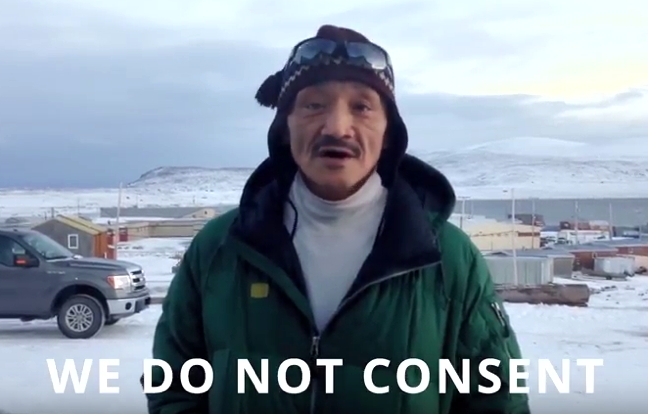 The new anti-seismic film emphasizes the UN Declaration on the Rights of Indigenous Peoples’ stipulation that Aboriginal people must give free, prior and informed consent to any development which could impact their traditional land and waters. 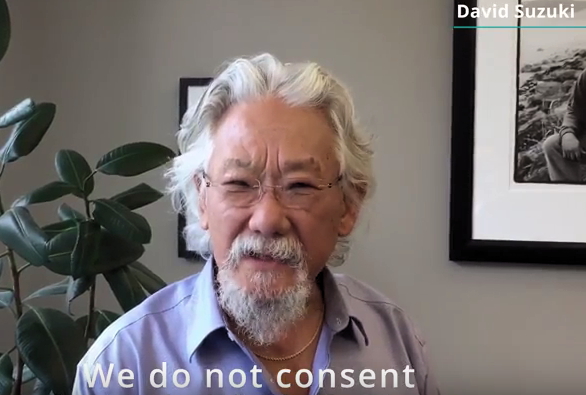 David Suzuki, one of the fathers of the Canadian environmental movement, is one of several celebrities and leaders featured in the new Greenpeace anti-seismic testing video. 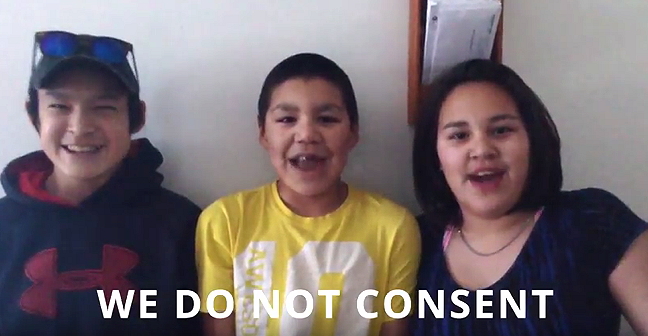 Three of several Inuit featured along celebrities in a new Greenpeace film denouncing seismic blasting off the east coast of Baffin Island.

As momentum builds toward this week’s Supreme Court hearing against seismic blasting in Nunavut, Greenpeace Canada has released a new video featuring Nunavut Inuit, First Nations leaders and high-profile Canadians repeating the same four words: “We do not consent.”

The video ends with a quote from Prime Minister Justin Trudeau: “No relationship is more important to me and to Canada than the one with Indigenous Peoples.”

Natanine, along with representatives of the Hamlet of Clyde River and the Nammautaq Hunters and Trappers Organization, will head to the Supreme Court Nov. 30 to argue that their Aboriginal rights were not respected when the National Energy Board allowed a consortium of companies to conduct seismic blasting off the east coast of Baffin Island.

Seismic testing involves pulling an air gun apparatus behind a boat, sending explosive blasts of sound into the sea and analyzing the echo for evidence of seabed hydrocarbons. That information is then sold to oil and gas companies.

The group of companies wishing to do the seismic blasting—adjacent to known oil and gas reserves off Greenland’s coast—wants to conduct their work during the open water season for five years in Baffin Bay and Davis Strait, outside of the Nunavut Land Claim area.

But Baffin Island Inuit say the explosions will impact marine mammals and fish who use sound to communicate, navigate and find food and as such, could impact Inuit rights to hunt and fish as protected in Canada’s constitution and also in the United Nations Declaration on the Rights of Indigenous Peoples.

In a place where store-bought food is expensive, jeopardizing traditional food sources increases the risk of food insecurity in the North, they add.

The companies argue that they did consult with local people and that there is no conclusive evidence to suggest such blasting harms marine life.

Melodramatic background music aside, the Greenpeace video is stirring and appears to prove the issue has moved beyond Nunavut to mainstream Canadians keen to support Aboriginal rights.

It’s likely that much of the video’s northern footage was shot when the Greenpeace icebreaker Arctic Sunrise visited Clyde River this past summer to install solar panels on the community hall and build relationships with local people strained by years of anti-sealing campaigns and resulting Inuit animosity.

The gist of the Clyde River opposition—that Aboriginal people have the right to protect their traditional land and waters against harmful development—echoes the current fight of Aboriginal protesters at Standing Rock against the Dakota Access Pipeline in North Dakota.

Support is growing among mainstream Americans for Standing Rock as well, and also among entertainers such as Bonnie Raitt, Neil Young, Jackson Browne and Dave Matthews.

A public protest supporting Clyde River’s fight is planned for 8 a.m. in front of the Supreme Court building in downtown Ottawa Nov. 30. The hearing is scheduled to begin that day at 9:30 a.m. You can find a summary of the legal arguments here.

Proceedings will be streamed on the internet for those with enough bandwidth to watch. You can find minimum system requirements here.