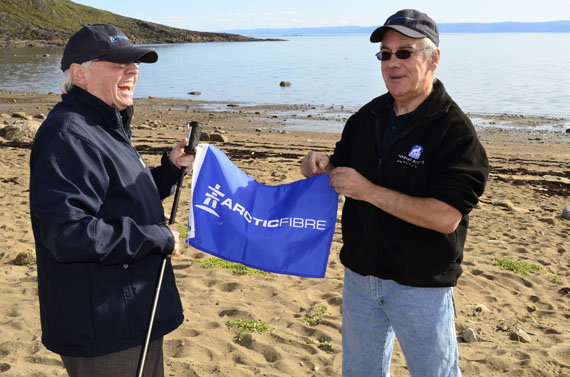 Douglas Cunningham, the chief executive officer of Arctic Fibre Inc., said Dec. 19 that his company is pleased with the decision that Canada’s telecommunications watchdog, the CRTC, issued Dec. 18 on Northwestel’s $233 million modernization plan.

“The CRTC’s decision clearly stated that northern Canadians should have access to the same level of high quality, affordable telecommunications as residents living in southern Canada, but added that Northwestel’s plans to achieve the CRTC’s throughput targets via satellite would be “prohibitively expensive,” Cunningham said.

In that decision, the CRTC said it’s worried about the growing digital divide between regions served by land-based fibre and microwave systems and regions like Nunavut that are served only by expensive satellite services offered by Telesat.

To that end, the CRTC will launch an inquiry into satellite telecommunications in Nunavut and other remote regions of Canada early in the 2014.

“The commission is concerned about the digital divide between satellite served communities and those served by fibre and noted Northwestel’s plans would not resolve this divide using satellite.”

Cunningham also said his company is happy the CRTC will look at a new industry subsidy to bring down the cost of telecommunications backhaul for the North.

“Backhaul” means the network connections that are used to connect the North to the main telecommunication pipelines that run across North America.

In relatively inexpensive places like Yellowknife and Whitehorse, that’s done through fibre optic lines that Northwestel controls. In Nunavut, backhaul is supplied through satellite communications, almost of which is controlled by Telesat.

Right now, the telecommunications industry in Canada is required to put about six-tenths of a per cent of its revenues each year into a high-cost area fund to defray the cost of landline phone service in remote and rural communities.

But many observers say that fund should be scrapped and replaced by a new fund, available to all telcos, to reduce the cost of broadband internet.

At a CRTC hearing in Whitehorse earlier this year, Arctic Fibre said that “excessive satellite backhaul costs” are the biggest cause of unaffordable telecommunications in the North.

“Fibre connectivity should initially permit carriers to increase the amount of bandwidth six or sevenfold for the same price,” the company said in a news release.

The Nunavut Impact Review Board received Arctic Fibre’s proposal this past Oct. 25 and is now conducting a screening.

As of Dec. 11, the review board had received comment from about a dozen agencies, governments and individuals, and will give Arctic Fibre until Jan. 6 to respond.