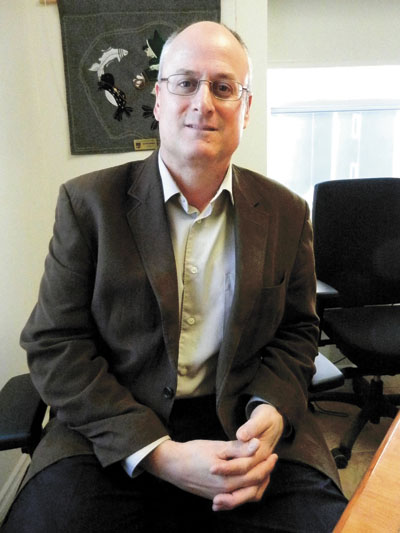 And for Borbey, the new president of the Canadian Northern Economic Development Agency, one of his topmost action items is to get close to what he calls “the game-changers.”

“Those are the big ones, the big game-changers that are really going to bring lots of prosperity,” Borbey said.

Borbey, who previously served as an assistant deputy minister for northern issues in the Aborginal and Northern Affairs Department, was appointed president of CanNor effective Dec. 19.

He succeeds Nicole Jauvin, the agency’s first president, who left the position in mid-2011 but stayed on as an advisor.

With a job that’s equivalent in rank to that of a federal deputy minister, Borbey will oversee a $44.8 million annual budget in 2011-12.

That’s down 27.8 per cent from the agency’s spending of $61.2 million in 2010-11 — because about $17 million worth of special economic action plan money will have been deleted from the agency’s budget as the government’s one-time-only stimulus plan draws to a close

With those programs completed, Borbey will turn his attention to other priorities.

A big one is to beef up a small, but potentially influential unit within CanNor: a six-person entitity called the Northern Project Management Office, also known as the NPMO.

“When I look at Nunavut, I think it’s a pretty exciting time for Nunavut right now with all of the projects that are out there that are potentially game-changers,” Borbey said.

This office, which got up and running in 2010, is a new function within CanNor, set up in response to mining industry complaints about the perceived complexities of enviromental regulatory systems in the North.

Borbey said the project management office, centred in Yellowknife but with staff in Iqaluit and Whitehorse, will act as a “pathfinder” to cut red tape and help mining companies and other developers steer big job-creating projects through the regulatory system.

To do that, each project will be tracked through each step in the process on a publically-available database. And the NPMO will co-ordinate the work of the scattered federal departments responsible for participating in environmental reviews.

At the same time, Borbey said the the NPMO will bring together the “right partners” to arrange skills training, infrastructure studies and other forms of assistance to help generate benefits for northern residents.

“What I think is particularly exciting is to ensure that the benefits from those projects stay with northerners, and go as much as possible with aboriginal people and land claims,” Borbey said.

This kind of mandate means CanNor is more than just a one-stop shop for distributing federal handout money to northern supplicants.

“CanNor has its own role to play. We’re not just there to transfer funds to others to realize their objectives. That’s not our role,” Borbey said.

Starting with its creation in 2009, CanNor took over many pre-existing federal funding programs, such as SINED (Strategic Investments in Northern Economic Development), various aborginal economic development and training programs, and official languages funding.

But handouts are just one part of CanNor’s job, Borbey said.

In addition to cutting red tape for developers, he said CanNor will also act as an advocate for northern interests within the federal bureaucracy.

And then, there’s that unflattering audit to cope with.

This past fall, Radio-Canada reported the contents of a leaked audit from the Office of the Comptroller-General of Canada that revealed a long list of financial management shortfalls.

That led to a brief spat between Western Arctic MP Dennis Bevington and Leona Aglukkaq, the minister responsible for CanNor, who said the agency would fix the problems as quickly as possible.

This past November, CanNor published an action plan aimed at accomplishing that.

Borbey said he’s committed to getting that work done by March 31, 2012.

“At the end of the day these were mistakes, there were oversights, there were gaps in our controls and these are all things that are all very much fixable. Many have them have already been fixed,” Borbey said.

“We’re committed to completing all remaining work associated with that action plan by March 31.”

He also said no money went missing or was misused.

“Certainly, there were a lot of problems that were identified in that audit. But it’s important to note there was no fraud, no misappropriation that was found in terms of funds,” Borbey said.

He said the financial control problems are likely related to the haste with which CanNor was required to manage federal stimulus funds spent as part of the government’s economic action plan.

“For an upstart organization that’s two years old, and with the kind of mandate that was given to CanNor, right off the bat when it was asked to deliver on some of the programs related to the economic recovery, the action plan, that created conditions were probably not enough attention was put on the right financial control processes. There may have been a bit of a rush to try to get money out to recipients, to get approvals,” Borbey said.

He will maintain an apartment in Iqaluit, where CanNor’s head office is located, and travel extensively throughout the North and to attend meetings in Ottawa.

Right now, CanNor is located temporarily on the second floor of the Inuksagait II building in Canada.

But they will eventually move into a new Inuksagait building that’s now under construction, informally dubbed “the yellow submarine.”