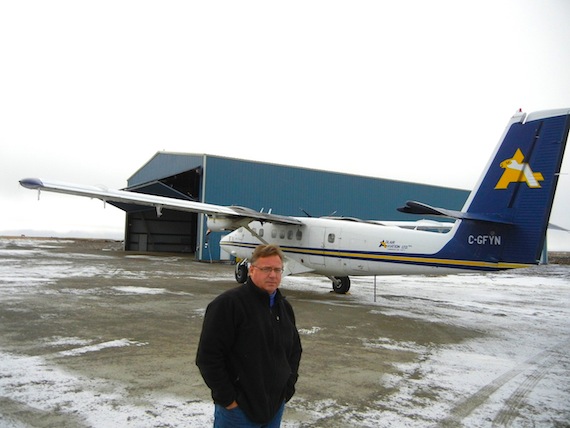 Nearly four years after the Government of Nunavut ended a contract for emergency medical travel with Adlair Aviation Ltd. of Cambridge Bay and gave it to a new company — and three years after Adlair filed a lawsuit against the GN —  lawyers from Adlair and the GN faced off last week at the Nunavut Court of Justice in Iqaluit.

“We were in court Aug. 17 by teleconference on my motion to get a judge to manage dates to force the case to move and block further delays,” said Ed Brogden, the lawyer for Adlair.

However, the GN’s lawyers, from the national firm Borden Ladner Gervais, have prepared, but not yet officially served a motion to the Nunavut court for a “Summary Judgment” to try to get the case dismissed on technicalities without a trial, Brogden told Nunatsiaq News.

That motion could be argued at Iqaluit in early December, Brogden said.

In its lawsuit against the GN, filed back in December 2012, Adlair is claiming $31.5 million in general and punitive damages — the amount that the locally-owned company would have earned during the five-year medevac contract lost in 2011 to Aqsaqniq Airways Ltd.

When Adlair, which has done air ambulance emergency medevac work in western Nunavut since the 1970s, lost the contract it had held since 2002, this move gave rise to a long, loud controversy over GN procurement policies.

Now, Adlair wants the Nunavut court to order the GN to terminate its contract with Aqsaqniq and reassess the 2011 contract proposals.

Adlair alleges that by awarding the work to the winning bidder, Aqsaqniq, the GN caused “critical delays in their air ambulance service leading to delays in medical treatment and the death of patients, as in the case of Betty Atighioyak in December, 2011.

In its bid to the GN, Aqsaqniq, with an address in Taloyoak, describes itself as a “majority Inuit-owned partnership” that includes a Yellowknife firm called Air Tindi, a subsidiary of a national aviation giant based in London, Ont. called Discovery Air.

And it’s Tindi and its fleet of aircraft that took over the medevac operation on Dec. 1, 2011 after Adlair lost the medevac contract.

Aqsaqniq is listed on Nunavut Tunngavik’s Inuit firm registry, with Naomi Eetoolook of Taloyoak named as its contact.

The much-reviled NNI policy is the GN’s instrument for complying with Article 24 of the Nunavut Land Claims Agreement, which requires that governments do things to help “Inuit” firms win contracts.

In its statement of claim, Adlair alleges Aqsaqniq is a Inuit-owned joint-venture “only on paper” and that Aqsaqniq serves merely as a “broker” for sub-contractors who are “based in southern Ontario with all operations directed outside Nunavut.”

“The Inuit content claimed by Aqsaqniq Aviation (2004) Inc. had no office, hangar, staff, equipment, aircraft or infrastructure in place at Cambridge Bay when the contract was awarded, nor did Aqsaqniq Aviation (2004) Inc. own any aircraft, supplies, equipment, nor employ any mechanics, medics, nurses or other related staff,” Adlair’s lawsuit states.

Adlair also alleges that Aqsaqniq’s individual shareholders and directors have no aviation experience and that none of them are pilots or aircraft engineers.

The GN admits those allegations, but they deny an allegation that they granted a $5 million bid adjustment to Aqsaqniq under its NNI policy.

The NNI policy allows the government, under an arithmetical formula, to overpay successful contractors if they follow certain Inuit or Nunavut ownership and employment rules.

But although Aqsaqniq successfully met the NNI’s criteria, Adlair still alleges they won the contract improperly.

That’s because Aqsaqniq was unable to get the aircraft and infrastructure required by the GN’s request for proposals, Adlair said.

“As of December 2012, Aqsaqniq Aviation (2004) Inc. has not installed the base, facilities, staff, aircraft and equipment at Cambridge Bay that were required to meet the terms of the Request for Proposals RFP 2011-21,” Adlair alleged.

Adlair’s medevac-equipped Learjet 25B remains in Cambridge Bay, but is no longer used for air ambulance services.

In its defence, the GN said that Adlair did not complete the NNI form that was attached to its request for proposals.

For that reason, the GN could not legally grant Adlair any bid adjustment on the basis of the NNI.

“As explicitly stated, if the NNI Form was not completed, no NNI bid adjustments would be granted,” the GN said in its statement of defence.

The GN also pointed out that its RFP for the medevac contract stated that the GN “was not required to accept the proposal that provided the lowest cost or price, or any proposal at all.”