“Think about the responsibilities that come with being an owner” 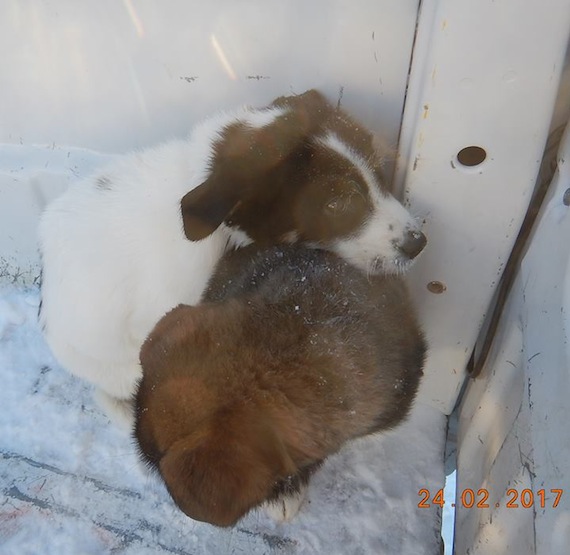 These two puppies huddle together for warmth after they were picked up Feb. 24 on the ice in Cambridge Bay. (PHOTO/FACEBOOK)

The Hamlet of Cambridge Bay wants the community’s dogs to be better taken care of, and at the same time, for residents to be protected from loose dogs running around town.

To that end, it’s publicizing new bylaws that deal with the prevention of animal cruelty and animal control.

The puppies had collars on, but not tags and the bylaw officer, who picked them up and took them out of the cold, couldn’t tell whether the puppies had fallen off a snowmobile or had been left to die on the ice, in weather with temperatures below minus 45 C with the windchill.

If the puppies were left out to die, it’s possible that those who did that could be charged under the prevention of cruelty to animals bylaw posted recently on the hamlet’s Facebook page

The bylaw says no one shall:

• leave an animal without nutritious food and palatable water for a period of longer than 48 hours;

• abuse an animal or punish an animal to an extent that is cruel or unnecessary; or,

• tether an animal by a chain or other material which is less than two metres in length.

The Cambridge Bay council has also encouraged dog owners to come to the hamlet office to register their dogs, receive dog tags and get vaccinations free of charge.

And its animal control bylaw attempts to remind people in this community of about 1,700 people to “think about the responsibilities that come with being an owner.”

The animal control bylaw says dogs that carry no license and can’t be identified may be destroyed at the expense of the owner who could be liable for a fine ranging between $25 and $500 or to serve 30 days in jail.