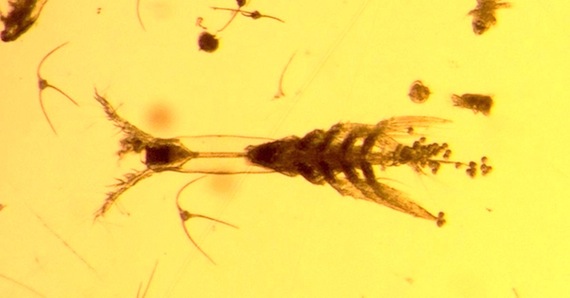 Meet the Monstrillopsis planifrons, a tiny crustacean which lives in the dark, cold waters off Cambridge Bay. (PHOTO COURTESY BY AURELIE DELAFORGE)

CAMBRIDGE BAY—If you ran into this eight-legged flat-headed monster on the streets of Cambridge Bay, you would be alarmed.

The beast lives in the dark waters near this community of about 1,700—but, happily, it’s only about two millimetres long.

In adult form, the flat-headed critter, which goes by the name of Monstrillopsis planifrons, uses its eight legs to propel its body through water.

And with one eye, no mouth and two antennae with hairs, it’s hardly beautiful, unless, perhaps, you’re another crustacean.

Researcher Aurélie Delaforge found this member of the Monstrilloida family—derived from the word monster—near Cambridge Bay in 2014 in the Dease Strait, the east-west waterway between the mainland’s Kent Peninsula and Victoria Island.

It’s the first record of a Monstrillopsis in Canadian waters.

“When we study the Arctic, there are still things we don’t know. This is a good example,” Delaforge said in a University of Manitoba news release.

“I think this is really important because it brings new information on the biodiversity present in the Arctic. It’s important to know what’s there.”

Delaforge, a doctoral student at the University of Manitoba, who had previously studied small ocean animals and plants, recognized the beast while at a spring camp out on the ice where she was sampling ocean water to support her research on plankton blooms under the sea ice.

The odd-looking “alien” kept showing up in her samples, suggesting it lived in the vicinity.

Delaforge’s find ended up in Mexico, where expert Eduardo Suárez-Morales dissected the creature and confirmed that it was the Canadian Arctic’s first, true monster.

You can read more about Delaforge’s research in “A new species of Monstrillopsis (Copepoda, Monstrilloida) from the lower Northwest Passage of the Canadian Arctic,” published in Oct. 19 in the online ZooKeys journal.