Sabina’s new infrastructure will allow mine site to be supplied by sealift, rather than solely by air 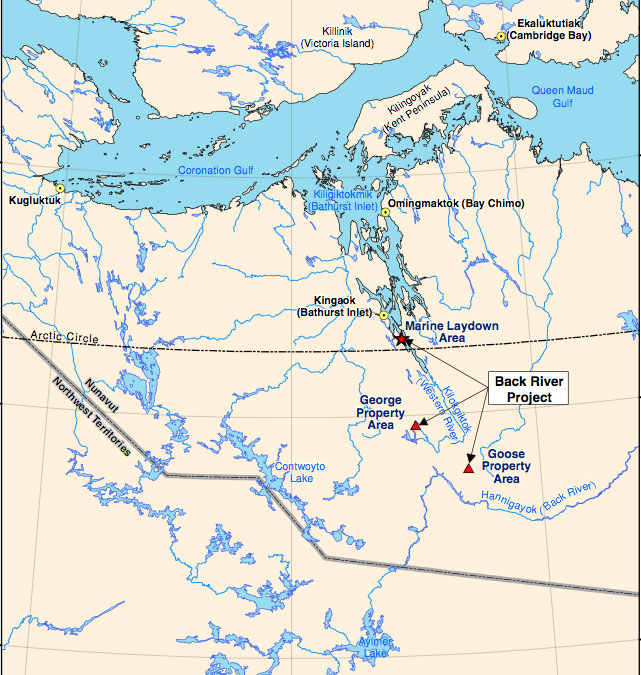 The star on this map shows the location of the new port facility. (FILE IMAGE) 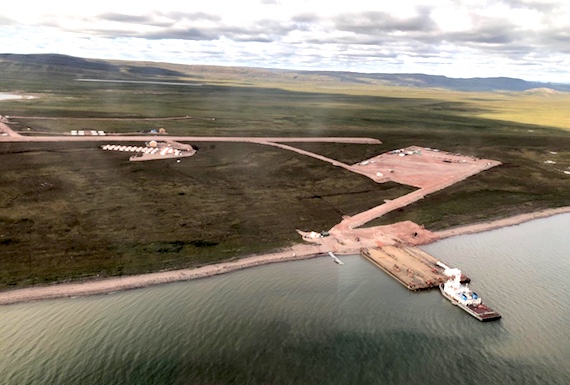 Here’s a bird’s-eye view of the new port and tank farm built at the end of Bathurst Inlet for Sabina’s gold mine project to the south. (IMAGE COURTESY OF SABINA) 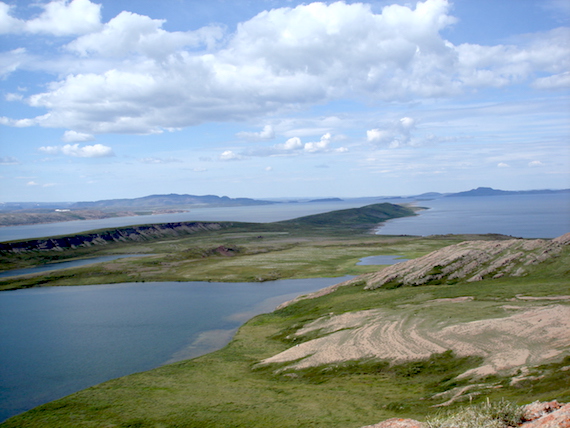 You would see no industrial marine traffic at all in Bathurst Inlet before the development of Sabina’s port and fuel depot. (PHOTO BY JANE GEORGE)

Nunavut’s Bathurst Inlet, known as Hannigayok in Inuinnaqtun, is now home to a new port and tank farm built by Sabina Gold and Silver Corp., which has forged ahead with its Back River gold mine project.

The project, rejected by regulators in 2016 for its environmental impacts and then approved a year later, now has only its Type A water certificate to go before completing the regulatory process.

Sabina’s plans for Back River include a chain of open pit and underground mines at its Goose property, located on the mainland 400 kilometres south of Cambridge Bay and 520 km north of Yellowknife. The mine is expected to operate for at least 10 years.

The $24-million port and tank farm is “critical infrastructure” for the mine and “provides more efficiency in supporting our exploration and future development activities than the current method of air transport alone,” the company said in a news release on Tuesday, Sept. 4.

The port’s completion allowed for the first sealift supply to be received, the company said.

While this facility is smaller than the larger, $500-million port and road facility that Kitikmeot Inuit Association is promoting or the similar development once proposed for Bathurst Inlet, its construction was still an ordeal, according to Sabina.

In March, equipment and supplies were transported over 150 kilometres by Cat train over a winter ice-road route from the Goose camp to Bathurst Inlet.

Next came a temporary camp and a 5,000-foot ice airstrip for 100 cargo flights, which brought in construction equipment, camp supplies and fuel. Then work involved the digging of a quarry and more construction from April to August 2018.

The infrastructure will “greatly improve logistics at Back River,” said Bruce McLeod, Sabina’s president and CEO, in the news release.

The company plans to continue with what it calls a “two-pronged approach” at Back River, by continuing exploration to find more gold and aiming to “de-risk” the project by careful spending.

“We also expect our Type A water licence by the end of this year,” McLeod said.

Earlier this month, Sabina announced it had made a high-grade gold discovery in the Nuvuyak gold zone, about one km west of the Goose main deposit.

The gold-rich lands surrounding the mine project and Bathurst Inlet have always been regarded as lush in vegetation and wildlife, including the Bathurst caribou herd, whose numbers have been in decline.

After initially saying no to the mining project in 2016 over environmental concerns, the Nunavut Impact Review Board re-evaluated Sabina’s revised project plans in 2017 and gave it a green light.

The NIRB said Sabina’s new plans outlined some of the most robust caribou protection measures ever developed for the Arctic, including preparation for the possibility of the project overlapping with caribou calving grounds.

In December 2017, the federal government approved the gold mine project.

This past April, Sabina and the KIA finalized an Inuit impact and benefits agreement for the company’s Back River gold project south of Bathurst Inlet in western Nunavut.

This agreement allowed Sabina to undertake exploration work on Inuit-owned land at its Goose property at Back River.

In exchange, the regional Inuit association will receive a one per cent production royalty, as well as shares in Sabina and a commitment to Inuit employment and training.