What climate change means to the Arctic’s creepy crawlies 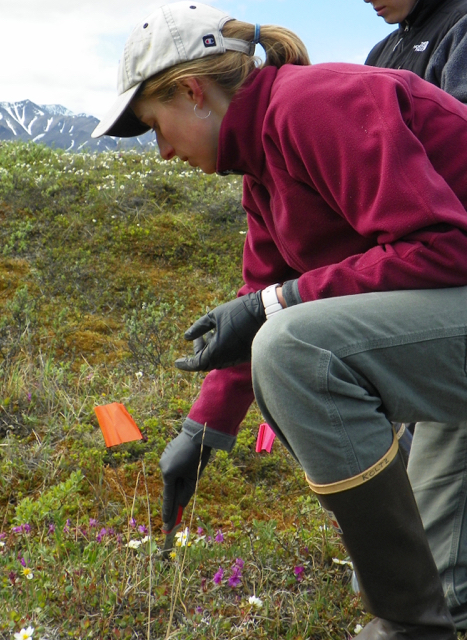 The arctic-alpine seed bug (Nysius groenlandicus) is one of the herbivores predicted to become more abundant in future climates. (PHOTO BY TOKE HØYE, COURTESY WASHINGTON UNIVERSITY IN ST. LOUIS)

The springtail is not one of your better-known Arctic creatures. The small, wingless insect gets its name from how it uses its rigid tail to catapult itself into the air and out of harm’s way.

The springtail also has a neat trick to help survive freezing during long Arctic winters. It manages to wick nearly all the moisture out of its body, turning itself into a small husk. It then rehydrates and plumps back up again when spring arrives.

But rapidly changing conditions prompted by climate change may not be as hospitable to the Arctic springtail.

Amanda Koltz, a postdoctoral fellow at Washington University in St. Louis, recently published findings at Royal Society Open Science that describe the changing composition of bugs in the tundra of Zackenberg, at 74 degrees latitude on the northeast coast of Greenland, over a period of nearly 20 years.

She found some critters are thriving—specifically, bugs that munch on plants or feed off other creatures as parasites. But others, specifically those that eat fungus, microbes and decomposing plants, are in decline.

It’s too early to say exactly what impact these changes could have for the broader ecosystem, but detritivores play an important role in breaking down dead plants and releasing nutrients into the soil.

“Those types of detritivores can have a big impact on nutrient cycling, and their activity can have cascading effects on plants and a variety of other organisms,” said Koltz.

The decline of detritivores was especially dramatic in the parts of the tundra that have become the most dry. “The warming of a few degrees might not be as stressful as the declining soil moisture that accompanies that warming,” Koltz said.

While 20 years may not be long enough to observe changes in the abundance of larger animals that roam the tundra, that period is quite long for critters with short lifespans studied by Koltz. Still, she says it’s remarkable that her study was able to capture the shifting composition of bugs that it did.

Koltz conducted research at the Zackenberg research station that’s operated by Greenland’s government. Researchers there have largely captured bugs by setting pitfall traps—essentially, a cup placed in a small hole dug into the ground, filled with salt water and a few drops of soap.

Besides mosquitos, bugs can be easily overlooked on the tundra. But, pound for pound, they’re actually far more abundant than animals or birds, said Koltz.

Her other research has taken her to Alaska to study wolf spiders, where, she reckons, they must account for “at least 100 times the biomass of wolves.”