What really happened to food costs under Nutrition North? 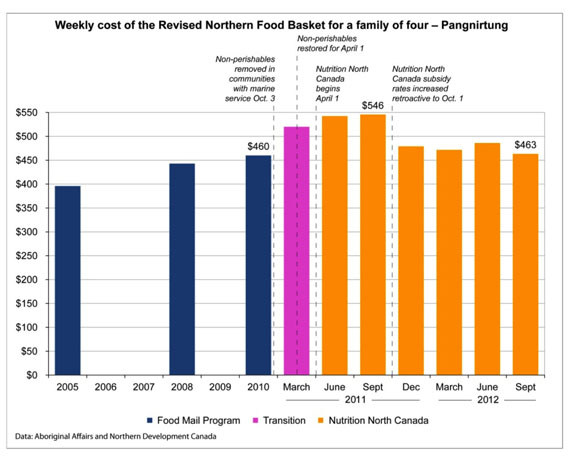 This graph shows that by September 2011, the cost of a revised northern food basket had spiked dramatically. By September 2012, the cost fell to a level comparable to 2010, but only because AAND pumped more money into the program and raised subsidies to a point that exceeded those used in the food mail program.

In May 2010, the Government of Canada announced that the Food Mail Program would be replaced by Nutrition North Canada and that the new program would “make healthy food more accessible and affordable to Canadians living in isolated Northern communities.”

But do these claims hold up under scrutiny?

In August 2012, the department finally released food cost data for March 2011 and for three-month intervals up to March 2012.

With the release in December 2012 of additional data up to September 2012, (see graph above) analysis shows that cheerleaders for this program have been using smoke and mirrors in the way food cost information is collected and presented, and have selectively quoted figures in a way that misleads rather than informs the public about northern food costs since Nutrition North Canada came into effect on April 1, 2011. How are they doing this?

First, although the department continues to use the same costing tool (the Revised Northern Food Basket developed under the Food Mail Program), Nutrition North Canada results are not comparable with previous years.

Under the Food Mail Program, prices were collected by departmental officials on-site from all stores in each community where surveys were done, and average prices for each product were used to calculate the cost of the basket.

But these on-site surveys were discontinued in 2010 as part of the transition to Nutrition North Canada, despite reassurance from the Assistant Deputy Minister at Standing Committee in June 2010 that such surveys would continue.

Instead, the new system relies exclusively on unverified price information fed to the department by the major retailers — mostly by the North West Co., which operates the Northern stores found in most communities, and the Quebec co-ops.

No useable price information has been collected from co-op stores in Nunavut or the Northwest Territories or from independent stores, with one exception in Iqaluit now owned by Arctic Co-operatives Ltd.

Second, the figures that are being used for comparison have been chosen to make the new program appear far more effective than it actually is. As its baseline, Nutrition North Canada uses results calculated from data supplied by retailers for March 2011, just prior to the implementation of the new program.

But in October 2010 non-perishable foods had been removed from the Food Mail Program for communities with marine service as the first phase of the transition to Nutrition North Canada.

As a result, we expect the price of non-perishable foods, which account for nearly 30 percent of the weight of the basket, would have gone up.

By March 2011, the damage had already been done. A pre-election announcement in March 2011 reinstated non-perishables under Nutrition North Canada effective April 1, 2011, for an 18-month period.

In most communities, there had already been large increases in the cost of the basket in the period leading up to March 2011 as a result of the removal of non-perishable food and, possibly, unjustifiable price increases for perishable food during the last six months of the Food Mail Program.

The apparent increase could also mean that prices at the Northern stores in March 2011 were higher than at the co-ops, for which no prices have been available since 2010.

The published figures show that the cost of the basket in stores for which results were reported had indeed decreased by an average of 7.7 per cent in 64 communities receiving a so-called “full subsidy” between March 2011 and September 2012, allowing the minister to claim at Standing Committee in December 2012 that the price of “some products” in an unidentified community or communities had dropped by as much as 37 percent and that the cost of the basket had dropped by 8 percent over an unspecified period.

But in fact, in every community in Nunavut for which results were reported and in most other communities as well, the cost of the basket increased between March 2011 and September 2011, even though non-perishables had been reinstated on April 1, 2011.

Third, subsidy rates in most communities were increased by $0.70 per kilogram in October 2011, to subsidy levels higher than under the Food Mail Program, and which Nutrition North Canada’s $54 million budget for the subsidy cannot support.

The decreases in the cost of the basket since September 2011 reflect those higher subsidy rates. And we have yet to see the impact of the removal of most non-perishable food from Nutrition North Canada on Oct. 1, 2012.

The accompanying chart shows what happened to the cost of the Revised Northern Food Basket in Pangnirtung – a pattern that is typical of most communities receiving a “full subsidy.”

Between March 2010 and March 2011, the reported cost of the basket increased by $60 (13 per cent). An unknown portion of the apparent increase may reflect the fact that figures for March 2011 are based only on prices reported for the Northern store and exclude the co-op, unlike the figures from earlier price surveys.

By September 2011, the cost of the basket had reached $546 — an all-time record for any isolated northern community in Canada. By September 2012, the cost had decreased to $463 — but with a higher level of subsidy provided to retailers than had been provided to Canada Post under the Food Mail Program.

The department no longer releases separate costs for the perishable and non-perishable portion of the food basket, as it had done from 1990 to 2010.

The department has been collecting very little price information — and has released no information — on foods not included in the Revised Northern Food Basket and nothing on the cost of essential non-food items.

The department also no longer collects food cost information in southern supply centres or in other communities which served as food entry points under the Food Mail Program.

Therefore, the gap between costs in isolated northern communities and southern Canada can no longer be measured or reported, as it was from 1990 to 2010. Whose interest does that serve?

In short, both the price monitoring system and the reporting on the results are as deeply flawed as the Nutrition North Canada program itself.

Fred Hill managed the Food Mail Program in different capacities at Indian and Northern Affairs Canada from 1991 until 2010, in collaboration with Michael Fitzgerald between 2008 and 2010.