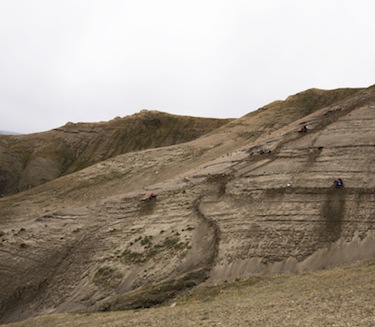 Natalia Rybczynski, Dr. John Gosse, research assistant Marisa Gilbert and graduate student are dwarfed by the terrain as they work at various levels of the Fyles Leaf Bed in 2008. (PHOTO BY MARTIN LIPMAN, CMN) 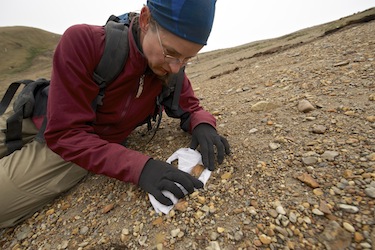 Natalia Rybczynski collects a fossil of the High Arctic camel in 2008 at the Fyles Leaf Bed site on Ellesmere Island. She uses toilet paper to gently wrap the bone for transport to the field camp. (MARTIN LIPMAN, CMN) 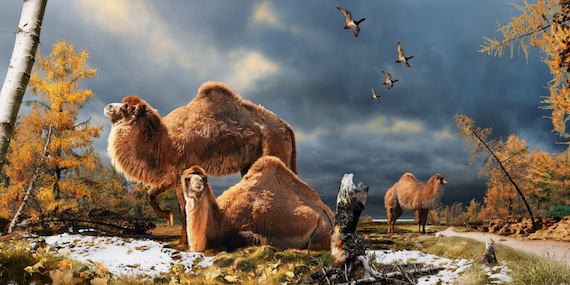 This illustration shows High Arctic camel on Ellesmere Island during the Pliocene warm period, about three-and-a-half million years ago. The camels lived in a boreal-type forest. The habitat includes larch trees and the depiction is based on records of plant fossils found at nearby fossil deposits. (IMAGE BY JULIUS CSOTONYI/ CANADIAN MUSEUM OF NATURE)

Today, you might see muskox, caribou, hares and wolves around Ellesmere Island’s Strathcona Fiord in the High Arctic region of Nunavut.

And up until two million years ago, when the glaciers reappeared there, you could have seen creatures resembling shrews, mice, bears, wolverines, weasels, horses, deer and beavers.

Now, you can add eight-foot-tall camels to the list of critters roaming the High Arctic some 3.5 million years ago.

A research team led by the Canadian Museum of Nature has identified the first evidence that an extinct giant camel once inhabited the High Arctic.

But when Dr. Natalia Rybczynski, a vertebrate paleontologist with the Canadian Museum of Nature., first picked up a piece of what turned out to be camel bone, she thought it might be a piece of ancient wood — which can also found in the area.

It was only back at the field camp that Rybczynski took off her bug mask.

Then she was able to see that it was bone “because there were no tree rings” and she could see traces of pores on the bone’s surface.

And she also realized that it was a fossil from a mammal larger than anything ever found before at the Fyles Leaf Bed site, a sandy fossil-rich deposit near Strathcona Fiord.

The sturdy camel, which weighed in at around 1,900 pounds, lived during a period when the Earth was 2 C to 3 C warmer than today, and the Arctic was 14 C to 22 C warmer.

Then, annual temperatures in the area would have hovered around freezing, and winters would have been cold and snowy.

Judging from fossils found at Strathcona Fiord, a boreal-type forest, with trees like larch, birch, alder and cedar, covered the land.

And when the camel lived on Ellesmere Island, the channels of the Arctic islands would have been filled in, so camels would have been able to move freely through areas that are today islands.

From North America, the camel traveled into Eurasia before reaching Africa.

Rybczynski suggests that some of today’s camels’ most distinctive physical features may date back to an era when they lived in the Arctic: wide flat feet, useful for walking on soft surfaces or snow; large eyes helpful for foraging in the winter during periods of lengthy polar darkness; and humps, which serve as fat storage for surviving long cold winters when food sources would have been more scarce.

The High Arctic camel was likely a browser, similar to a moose today, and would have eaten woody material in the winter.

Similarly, modern camels can eat grasses and chomp on leaves and twigs, but if they’re hungry, they’ll also scavenge meat and bones.

The discovery, announced by the Canadian Museum of Nature March 5, is based on 30 fossil fragments of a leg bone that Rybczynski and others on the team picked up over three summer field seasons in 2006, 2008 and 2010.

The fossils, the most northerly record for early camels, whose ancestors were already known to have originated in North America some 45 million years ago, are “an important discovery,” Rybczynski said.

That’s because they provide the first evidence of camels living in the High Arctic region and extend the previously-known range of camels in North America northward by about 1,200 kilometres.

The fossil bone fragments were part of a large tibia, the main lower-leg bone in mammals, and belong to the group of cloven-hoofed animals known as arteriodactyls, which includes cows, pigs and camels.

Digital files of each of the fragments, produced using a 3D laser scanner, allowed for the pieces to be assembled and aligned.

The size of the reconstituted leg bone confirmed it was from a very large mammal.

Collagen evidence also showed that the High Arctic camel was a close relative of a rare giant camel found in Ice Age deposits in Yukon.

For now, the bones of the High Arctic camel are housed in the Canadian Museum of Nature’s research and collections facility in Gatineau on behalf of the Government of Nunavut.

Strathcona Fiord is also where researchers from the Canadian Museum of Nature discovered the remains of a 300-million-year-old creature they called “tiktaalik,” a missing link between fish and land-based animals.

Rybczynski said there are still many other intriguing fossils to be gathered at Strathcona Fiord where “we’re just beginning to scratch the surface.”

As for the fossil-loaded deposits, they’re also of interest to mining companies looking for coal, such as Canada Coal, which also holds an exploratory licence adjacent to the Beaver Pond deposit on Strathcona Fiord.

Rybczynski said she can only hope that people in Nunavut will want to save those fossils, which may tell more what lies ahead for a warmer Arctic.

“There’s still a lot of stories to be told,” she said.

with files from the Canadian Museum of Nature

The fossil bones of the High Arctic camel laid out in Natalia Rybczynski’s lab at the Canadian Museum of Nature. (PHOTO BY MARTIN LIPMAN, CMN)