With searches on the rise, Nunavut urges travellers to be prepared 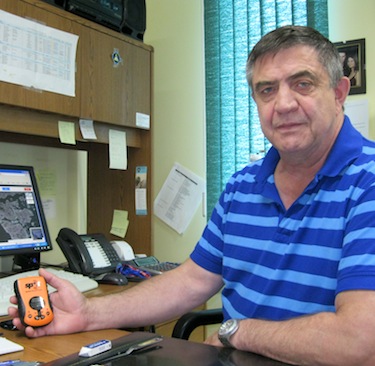 Ed Zebedee, director of Nunavut’s protection services, holds a “Spot” tracker device which can save time and lives, when it comes to searches. Zebedee heads up territorial search and rescue from his office in Iqaluit, where his department responds to all calls for lost people lost on the land, and responds to transmissions from the Spot devices, shown, which give exact location and simplify search operations. (PHOTO BY PETER VARGA)

Search and rescue calls in Nunavut are on the rise, the Government of Nunavut says, as more people head out onto the land or water.

And many searches start because travellers ignore the usual advice and safety norms.

A recent search — which roused Nunavut’s entire search and rescue system from top to bottom, including air searches from Canadian Armed Forces aircraft — involved two fishermen, Earl and Matt Zellen, a father and son from Michigan who had apparently made the obvious mistake of going out onto a large remote lake fully-equipped, but not wearing their life jackets.

Their boat was found on the shoreline, fuel spent, with personal floatation devices positioned as seat cushions.

“That was a standard search for us,” said Ed Zebedee, director of Protection Services, the unit that runs Nunavut’s search and rescue operations, as he recalled the recent search for the two men on a fishing trip at Dubawnt Lake, July 29 to Aug.1.

The sprawling body of water is surrounded by treeless land, 250 kilometres southwest of the nearest Nunavut community, Baker Lake.

The search began when Earl Zellen, 71, and Matt Zellen, 40, on a fishing trip with northern outfitter Tukto Lodge, failed to meet with a plane for a dinner-time rendezvous.

The outfitter started the search that evening and located the boat, but found no sign of the men along shorelines while the sun was still up. The usual response followed.

The outfitter “notified the RCMP, and late that evening they notified me,” said Zebedee. His office called the outfitter, gathered information and called on Nunavut search and rescue volunteers in Baker Lake. Protection services then put their search and rescue mission to work the next morning.

“If we can’t get resources on the ground immediately, I can make a request to the Joint Search and Rescue Co-ordination Centres,” Zebedee said. Four such centres cover the country, from Halifax to Vancouver. These centres call on added resources at the federal level.

In this case, Zebedee put out a call to the centres to get more immediate help on an air search. The Trenton, Ont. centre sent a large Hercules aircraft to scan the lake on the first complete day of the search.

Meanwhile, the GN’s protection services chartered a Twin Otter plane from Ookpik Aviation in Baker Lake as soon as it was available. Nunavut search and rescue spotters boarded and took to the air once it was ready.

A country-wide search and rescue network stretching from Zebedee’s office in Iqaluit to on-call spotters in Baker Lake, Nunavut, and south to Joint Search and Rescue Co-ordination Centres in Winnipeg and Trenton, Ont., exchanged information on the work as it progressed.

“We discuss a lot of things going on in a search, between us, the RCMP, the military in some cases, and other search and rescue experts across the country,” said Zebedee. “It’s a big family out there.”

Aerial searches like this one drive up the department’s costs, he said, even though these have a much lower success rate than ground searches. The operating cost of a military Hercules plane is a whopping $26,000 an hour, Zebedee said. The daily charge for a chartered Twin Otter is about $22,000.

“We know from the Canadian military that finding an individual out on the land, if you don’t know where he is, is about eight per cent successful with aircraft,” Zebedee said.

Ground searches have a 98 per cent success rate, “so we know that ground search is the most viable, but there’s times when you do have to get the aircraft out. We utilize local knowledgeable hunters, because hunters can see things you and I sure can’t.”

The search for the Dubawnt Lake boaters concluded once it became obvious the two men were not around the lake, and could not have survived long in the ice-cold waters without their life jackets.

“When it is our opinion that finding survivors is unlikely, that’s when we call off the search from our side,” said Zebedee. From that point, the RCMP kept the file as a missing persons case.

“Once we determine to the best of our ability that there is no survivor, then it becomes a recovery search, and we don’t do them,” he said.

As snow and ice give way to open water, calls shift from mostly snowmobile-related incidents to boating mishaps.

Protection service’s message to those heading out onto to the land is consistent: “Be prepared when you’re out there. Take communication equipment, whatever you can,” said Zebedee, pointing to Spot locator devices as a must-have for those headed out on the tundra.

“Let people know where you’re going, and be prepared for 72 hours because it might take us that long to get somebody to you.”

If you need help out on the land, you can simply press a button on the Spot, and it then transmits a message saying whether you need help or if you’re okay.

Spot trackers can also send an SOS message or a customized message, and allow contacts to see a user’s location.

The hand-held SPOTs have greatly simplified searchers’ work since they were introduced in 2010.

The costliest searches are the ones “where we don’t know where somebody is,” Zebedee said, and no one travelling through remote areas should be without Spots, which are available in Nunavut at RCMP detachments or hunters and trappers organizations throughout the territory.

With or without the devices, be ready to survive on your own for 72 hours, and keep others informed where you’re going, he reminds.

“If somebody’s overdue, call us. We’ll start the search as soon as we get the phone call.”