Documenting the art of seal skin preparation for future generations

“It’s still a custom we value very much” 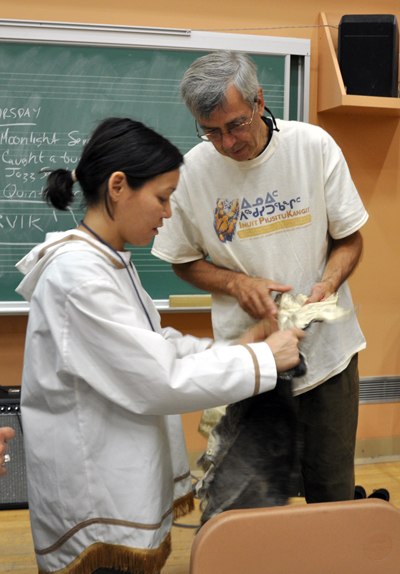 Sheila Katsak shows off a cleaned sealskin to a participant at the Inuit Studies Conference Oct. 10. (PHOTO BY SARAH ROGERS) 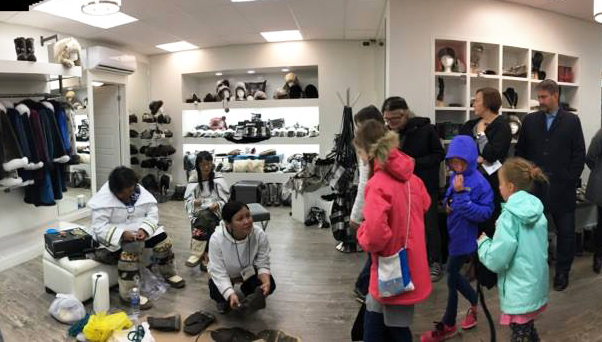 The Mittimatalik Arnait Muqsuqtuit Collective show off their skills at National Boutique in St. John’s Oct. 8 during the Inuit Blanche arts festival. (PHOTO COURTESY OF MAMC)

It looked like a frantic activity: she would place the seal skin in boiling water, twirling carefully, and anxiously chanting “Aina, aina” to herself.

Years later, Ootova realized that anxiety was her mother’s way of ensuring the seal skin didn’t overcook, so it was in good condition to be sewn into clothing.

Today, the Pond Inlet seamstress and culture teacher wants to make sure the same skills she learned from her own mother transfer to a younger generation of seamstresses in the Baffin community.

“Today, we’re still practicing,” Ootova tells an audience at the Inuit Studies Conference Oct. 10, hosted in St. John’s, NL. “But our elders and teachers aren’t as strong as they were. We have to do the physical work for them.”

Ootova is one of 15 women in Pond Inlet who make up the Mittimatalik Arnait Muqsuqtuit Collective, a group of local seamstresses dedicated to sharing their knowledge on traditional sealskin preparation.

One video shows Ootova and her sister Sarahme Akoomalik seated outside scraping the fatty remains from a seal skin with an ulu (see below).

In another video, the sisters stand outdoors in the melting snow of June, showing viewers how to tie seal skins to wooden frames for drying.

The videos aren’t meant to be an exhaustive resource for people who are new to skin processing and sewing, but rather to serve as a starting point.

Collective member Sheila Katsak said the videos are designed to encourage young sewers to take an interest in a project, and then engage elders to help them complete the work.

Katsak’s own 16-year-old daughter is featured in one video learning to make a pair of kamiks. Following the shoot, the teen took her work to her own grandmother to help finish them.

Katsak said the collective wasn’t trying to remedy a lack of skills in sealskin preparation or sewing, but a lack of opportunity to communicate those skills.

“We all work all the time and there’s not always time to learn,” she said.

The Mittimatalik Arnait Muqsuqtuit Collective has been equally busy in St. John’s this week, hosting a sealskin skills open house as part of The INuit Blanche arts festival Oct. 8, and sharing their work with conference goers.

They’ve been bombarded with questions, Katsak said. “Are there enough seals? Does it smell? How do you make patterns in sealskin?”

One participant, a Rigolet man who has lived most of his life in St. John’s, had a number of questions for the woman Oct. 10 about how they practice their craft.

Most of the Inuit in Nunatsiavut have lost those skills, he said, but he hangs onto fond memories of the first seal he killed in his twenties, and the sealskin mitts his aunt fashioned for him.

“It’s still a custom we value very much,” Ootova said.

You can learn more about the collective and watch some of its master classes here.