Pond Inlet hunters question results of 2013 aerial survey, and so do some DFO officials 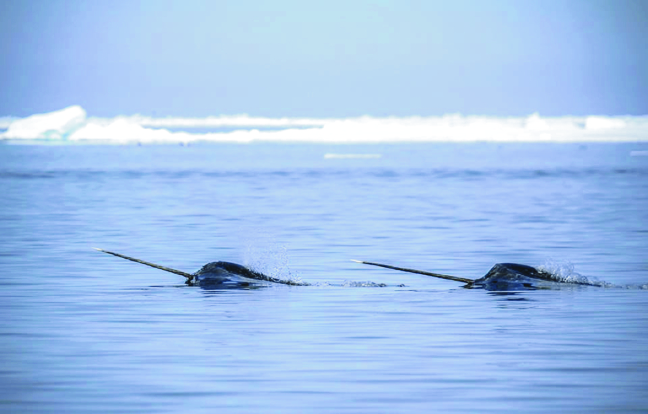 Baffin Bay narwhal appear to be increasing in some areas and decreasing in others and local hunters say it’s not the numbers that are going down, the whales are just eluding aerial surveys by moving at different times or going different places in summer. (PHOTO BY NIORE IKALUQJUAK) 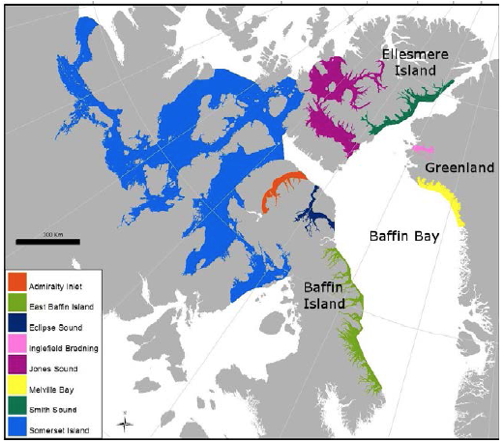 A Fisheries and Oceans Canada map showing different places where Baffin Bay narwhal stocks gather in summer. The Baffin Bay population, estimated to number about 142,000, is one of two narwhal populations in Canada, the other being in northern Hudson Bay. (DFO MAP)

Modern science and Inuit knowledge are at odds yet again in North Baffin over a recommendation from the federal fisheries department to cut the harvesting quota for Baffin Bay narwhal by nearly half—to 134 from 236.

The Department of Fisheries, Oceans and the Canadian Coast Guard submitted its quota recommendation to the Nunavut Wildlife Management Board this past May based on 2013 aerial surveys.

Those surveys showed the numbers of whales in Eclipse Sound had declined to an estimated 10,489 animals—half the number from the last survey in 2004, of 20,000.

Hunters in Pond Inlet, located at the mouth of Eclipse Sound, who don’t believe the survey, are upset with the DFO recommendation and they voiced their concerns last week at an NWMB public hearing in their North Baffin community.

In a May 2016 letter to the NWMB, the Mittimatalik Hunters and Trappers Organization said the 2013 narwhal survey was flawed because whales might have been scared away by summer ship traffic in the sound, or might not have even arrived yet to their summer migration area.

They added that surveys were conducted during foggy weather which might have made it difficult for spotters to see whales from the air.

It’s also possible narwhals are just going somewhere else. Aerial surveys revealed that the population of narwhals in Admiralty Inlet, around the northern coast of Baffin Island, had nearly doubled to 35,000 from roughly 18,000 counted in 2010.

In fact, DFO’s own Canadian Science Advisory Secretariat released a document assessing those results in 2015 which suggests population estimates might not be accurate.

“Given the imprecise nature of the estimates and the uncertainty about population structure, it is not clear if these changes reflect true changes in abundance,” the document says, referring to the Eclipse Sound and Admiralty Inlet numbers.

“The combined estimate for Admiralty Inlet and Eclipse Sound (45,000) is similar to the total of previous abundance estimates.”

Chris Lewis, a DFO fisheries management biologist in Iqaluit, said Dec. 5 that the DFO responded to Pond Inlet hunters’ concerns by going out this past August to count narwhals in that area again, using satellite tagging and aerial surveys beyond Eclipse Sound, as recommended by hunters.

But unfortunately, the results of those surveys must go through rigorous peer review before being released to the public—and that could take a year or so.

Meanwhile, the DFO’s recommendation to cut the Eclipse sound narwhal quota by half will stand, Lewis said.

“This summer’s survey doesn’t matter because they’ve already decided to get the numbers reduced so why did you do the survey this summer if it has no impact on anything?” Enook said.

“Sometimes, when governments stick to their policies, there’s nothing you can do to change them. And yet, they’re the same people who will turn around and say, we’re not done our work but we want to change the quota now. It’s very strange.”

Officials with the DFO say the 2013 survey is the most comprehensive snapshot taken of Baffin Bay narwhal ever conducted at one time. The Baffin Bay group is one of two narwhal populations in Canada, the other in northern Hudson Bay.

The 2013 survey said there were roughly 142,000 narwhal in Baffin Bay, divided into six summering stocks. Under the current management plan, each of those stocks gets its own total allowable harvest, or quota.

The DFO has recommended that most of those quotas should be increased, except for Eclipse Sound and in a combined area of Jones and Smith sounds.

The NWMB must now weigh Inuit knowledge and fisheries science before making quota recommendations to the federal fisheries minister.

The fisheries minister can accept the NWMB’s decision, reject it or send it back to the NWMB for further consultation.

But there’s something else to consider: international trade in narwhal products, specifically ivory.

Narwhals are listed in Appendix II of the Convention on International Trade in Endangered Species or CITES. Since Canada is a signatory to CITES, it must abide by its rules.

One of those rules says products from animals listed in Appendix II cannot be traded internationally unless they are given something called a “non-detriment finding.”

An NDF designation means trade would not threaten that particular species provided the animal was harvested legally within an established quota system as determined by a nation’s scientific authority. All narwhal in Canada are currently under an NDF, meaning parts can be legally traded.

So who’s the designated scientific authority in Canada? The DFO’s Director General of Ecosystem Science. In other words, if hunters want to continue selling narwhal ivory beyond Canada’s borders, they’ll have to abide by whatever the DFO recommends.