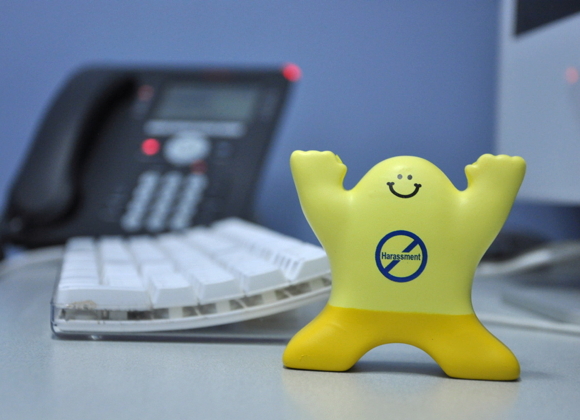 This stress reliever squishie is part of the GN’s anti-harassment workshop, which is being rolled out by the government’s human resources division. The workshops aim to educate all employees on the importance of a harassment-free workplace. (PHOTO BY THOMAS ROHNER)

When Nunavut MLAs meet in Iqaluit May 31 to begin the summer 2016 sitting of the legislature, they will spend most of that session tackling a serious problem, Iqaluit-Niaqunnguu MLA Pat Angnakak said May 24.

That problem: the Government of Nunavut’s broken process to deal with workplace conflict and allegations of on-the-job harassment, the Iqaluit MLA said.

“The current process doesn’t maintain people’s dignity. People I’ve spoken to feel they’re not listened to. Some continue to throw up out of anxiety before going to work,” Angnakak said.

The GN’s recent efforts to hold anti-harassment workshops for employees don’t go far enough, said Angnakak, from her office in the assembly.

Angnakak pointed out the GN has “a lot of great employees,” but said “clearly there is a problem” with how workplace conflict is dealt with: “Why else are [MLAs] going to discuss it next session?”

Legislators will review a host of the government’s human resource documents during the sitting.

The government has yet to fully admit there is a problem, although Human Resources Minister Keith Peterson, speaking this past February in the legislature, said that the GN would hold anti-harassment workshops for managers.

Those workshops were not a “knee-jerk reaction” to news coverage and pressure from MLAs on the topic but have “been in the works for about a year,” Chris D’Arcy, Peterson’s deputy minister, told Nunatsiaq News May 20.

The workshops, led by the GN’s head of employee relations, Cheryl Ramsay, have so far been delivered to about 170 employees — both managers and non-managers — D’Arcy said.

According to D’Arcy, the workshops will be delivered once a year in each Nunavut region to employees who have not yet received the training.

All other employees will have to sign a document each year saying they understand the GN’s harassment-free policy, said D’Arcy.

But Angnakak said it’s hard to believe the government has been planning these anti-harassment workshops all along, independent of pressure from media and MLAs.

“If this was a process all along, then why didn’t we hear about it all along?” she asked.

“I’m very happy to see the government has started the ball rolling to address the bullying issue,” Angnakak said.

“Training and education is good, it’s a start. But I don’t think the workshops will stop those who are going to bully anyway. And the government isn’t looking at departments where this happens frequently.”

Recently, Angnakak said three employees came into her office in the same week, all of whom said their harassment complaints were not properly dealt with.

Two of those employees were from the same department, and their complaints involved the same supervisor who has had similar complaints made against her when she worked in another department.

“How come there’s no real investigation about departments that have more than a certain number of employees complaining about the same manager?” Angnakak said.

The MLA said the government has described her as being too one-sided, taking the side of the employee over management or government.

But Angnakak denied that, saying the government’s current practice does not investigate both sides of the story fairly.

For example, the anti-harassment seminars should not be delivered by an in-house expert like Ramsay from employee relations, Angnakak suggested.

Some disgruntled employees complain that GN employee relations staff tend to side with their employer — the GN.

“I think the workshops should be developed and delivered from outside the government. It would be better that way, less chance for bias,” she said.

But the government’s current plan is to work within the revised Public Service Act, and not to consider a new or overhauled process to deal with harassment complaints, D’Arcy said.

“We’re enthusiastic about rolling out the workshops. Logistically it’s difficult to hit 4,000 employees across the territory. But the feedback we’ve gotten so far has been positive,” D’Arcy said.