“The worst predator” is mining: Arctic side-conference in Sweden

“We’re standing with our backs against the wall” 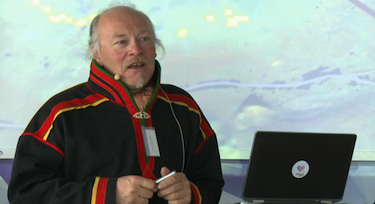 Mats Berg says the Saami, like many indigenous people, are not against all mining. “We live in 2013. We’re dependent on minerals, on electricity, on oil,” he said May 13 at the Peoples Arctic conference in Kiruna, Sweden. (HARVESTED IMAGE) 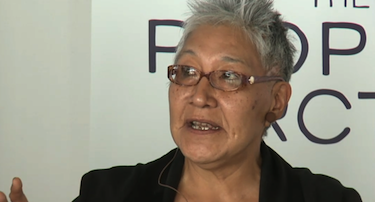 “Canada has not been consulting with Inuit even though they have a duty to consult with us under our land use agreements,” says Rosemarie Kuptana, who once held the presidency of Inuit Circumpolar Council and Inuit Tapiriit Kanatami, May 13 at the Peoples Arctic conference in Kiruna, Sweden. (HARVESTED IMAGE)

As the Arctic Council gets ready for the May 15 ministerial meeting in Kiruna, Sweden, indigenous leaders from around the circumpolar region are already in the small Arctic town.

There, in the shadow of the world’s largest underground iron mine, they met May 13 to discuss the impact of resource extraction on their communities.

Mining is “the worst predator we have right now,” said Mats Berg, a member of the Saami community on the outskirts of Kiruna.

Berg opened the second, and final, day of the Peoples Arctic conference with a presentation on “resistance against destructive mining.”

Northern Sweden is a hot spot for mining, especially iron, with at least five sites on his people’s traditional lands that have sparked the interest of mining companies.

These sites lie right in the middle of crucial grazing land for reindeer — the animals his people have used for generations for food, clothing and transportation, Berg said.

But he said the ability of the Saami to resist these projects is limited.

“My history is here,” he said, gesturing to a photo projected on the wall showing the hills of his homeland. “It’s written into the nature. This is my history book. This tells me stories about my ancestors. When you take that away from me, what do I become?”

But Berg is clear that the Saami, like many indigenous people, are not against all mining.

“We live in 2013. We’re dependent on minerals, on electricity, on oil,” he said. “But we need a balance.” Meaning, he said, a bigger role for Saami in discussions about their land.

“I want the right to say no [to certain developments],” Berg said. “We’re standing with our backs against the wall.”

But while a bigger say in the process would allow the Saami to say no to some projects, it could also enable them to say yes to others, he said.

The Saami are open to some mining on their land if they are able to negotiate the terms.

The need for a stronger indigenous voice in the conversation about Arctic mining came up again and again during Monday morning’s panel discussion.

In Canada, “there is no discussion going on” between the government and indigenous people, said Rosemarie Kuptana, who once held the presidency of Inuit Circumpolar Council and Inuit Tapiriit Kanatami.

Kuptana pointed to the current race to lay claim to Arctic waters. Using the United Nations Convention on the Law of the Sea, many countries are urgently trying to sort out who owns what in the Arctic. The outcome will have major impacts on oil and gas exploration in Inuit territory, she said.

“The reason I raise this is because Canada has not been consulting with Inuit even though they have a duty to consult with us under our land use agreements,” she said.

The process through which countries apply to have their waters recognized is confidential and only open to nation states, she said, which means the Inuit have largely been left in the dark.

“They’re not listening to our interests,” Kuptana said.

Mikkel Myrup, chair of Avataq, Greenland’s environmental association in Greenland, noted that when national laws demand environmental impact assessments, it’s often left up to the company to inform the community about a potential project.

Which they do, but only to a point: “they come into a community and explain how positive the impacts of the project will be,” Myrup said.

“There’s not a lot of room for critical voices or critical discussion about the projects.”

But it’s that critical discussion that’s so important to indigenous groups.

As Kuptana put it, “that is my homeland. We have nowhere else to go.”

The Peoples Arctic conference finished May 13.

The Arctic Council meeting kicks off May 14 with presentations from working groups, with Leona Aglukkaq, Canada’s minister responsible for the Arctic Council, United States Secretary of State John Kerry and top ministers from the council’s other member nations, Russia, Finland. Sweden, Norway, Denmark and Iceland.

Alex Boyd, a Canadian graduate student in journalism, on internship with the Barents Observer web news service in Kirkenes, Norway, will be in Kiruna May 15 to cover the Arctic Council ministerial for the Nunatsiaq News.