Gjoa Haven is tops for high food prices in Nunavut 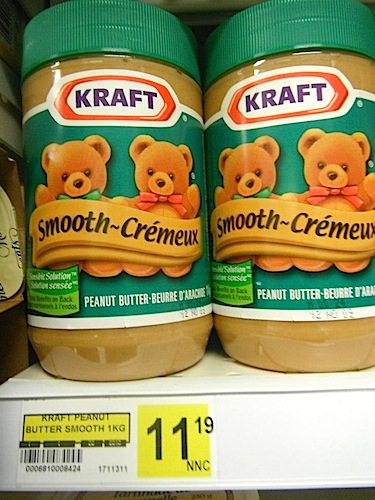 The high cost of food in Nunavut is seen by this photo posted on the “Feeding my family” Facebook page which shows a price of $11.19 for peanut butter.

If you live in Gjoa Haven, you may feel you’re spending a lot to feed your family — and you’re right, according to figures released by the Nunavut Bureau of Statistics.

Its food price survey found that in the western Nunavut community of Gjoa Haven, food costs are the highest of 10 Nunavut communities recently surveyed and they’re 18 per cent higher in Gjoa Haven than in Iqaluit.

This past March and April, a pilot food price survey was conducted across 11 Nunavut communities (10 of which returned usable data, the bureau said).

In a comparison of 28 combined food items, Iqaluit has the lowest overall food cost in the territory at $216.21 for a selected weekly basket.

Gjoa Haven has the highest food prices of the communities surveyed at $255.58 — 18 per cent higher than Iqaluit.

Peter Taptuna, Nunavut’s minister responsible for the Nunavut Anti-Poverty Secretariat, announced the survey last March, saying volunteers would visit retail stores to determine the cost of different goods to get an idea of the cost of living in various communities.

The Anti-Poverty Secretariat then worked with the Nunavut Bureau of Statistics to compile the information. 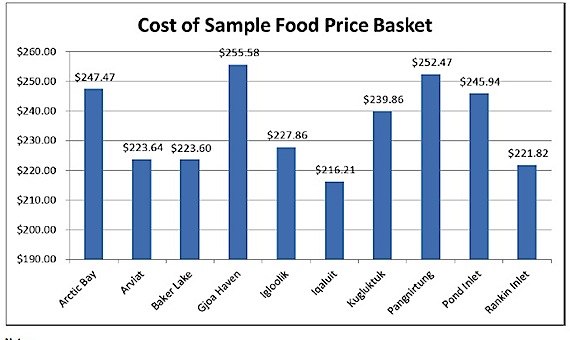 This graph from the Nunavut Bureau of Statistics shows comparative food costs in ten Nunavut communities.