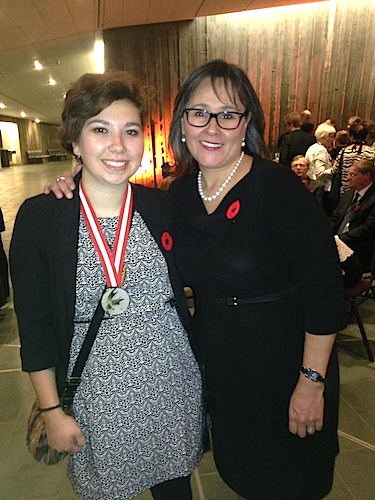 A short story written by Aviaq Johnston of Iqaluit has earned her a Governor General’s History Award, established in 1996 by Canada’s National History Society to recognize excellence in history.

“Knowing and understanding our history directly influences matters of science, as well as our ideas of what it means to live on this land and to be Canadian. Studying and researching history can sometimes mean re-imagining our past,” said Governor General David Johnson Nov. 3 at the awards ceremony in Rideau Hall in Ottawa. “That is the power of history.”

Johnston received one of four awards in the aboriginal arts and stories category.

Earlier, Johnston placed first in an art and creative writing competition in Canada for Aboriginal youth called Aboriginal Arts and Stories for her entry called Tarnikuluk, which means “little soul.”

Her story deals with suicide — a subject many are wary about discussing.

“I chose to write this story based on the death of one of my childhood friends, who committed suicide when I was 14 years old. She was only 15 years old when she took her own life. It was her death that made me realize that life is short and that these issues need to be addressed,” said Johnston, now 21, about her story.

For her story, Johnston said she drew from Inuit history, contemporary social issues and Inuit mythology.

“Throughout the eras of assimilation among aboriginal peoples in all of Canada, we have all been faced with similar abuses by colonial powers. From residential schools and relocations among Inuit, intergenerational effects have become one of the most potent reasons for the horrible statistics that are affecting Nunavummiut today, particularly Inuit youth,” said Johnston in a statement posted on the Aboriginal Arts & Stories website about her story.

One of the biggest issues among Inuit in Nunavut right now is mental health, she said.

“Without adequate services in our territory, many people resort to unhealthy ways of dealing with this. More often than not resulting in physical, emotional and sexual abuse, drugs and alcohol abuse, and suicide.”

She said her story speaks about those inter-generational effects as experienced by the spirit of a young Inuk woman who has recently committed suicide.

“Historically, Inuit believed in spiritual reincarnation of all living creatures. I took this idea and played around with it, but it still accurately portrays how communities deal with the tragedy of suicide,” she said.

On this journey to the afterlife, she is guided by Tulugak, a raven who is punished for his mischievous ways and causes the death and rebirth of the sea goddess, Nuliajuk.

“I did not name a particular community as this story belongs to all Inuit who have experienced the death of a loved one by suicide,” Johnston said, adding that from 2011 to 2013, there were 105 deaths by suicide in Nunavut, the youngest being 11 years old, she said.

You can read Johnston’s story here.