Ulittaniujalik “hard to pronounce, or even memorize” 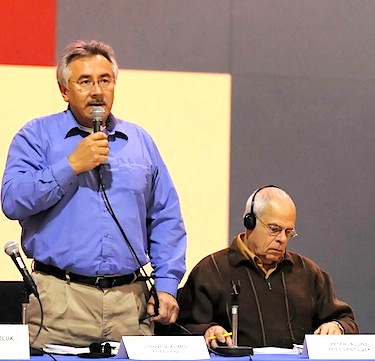 Johnny Adams of Kuujjuaq (left) presided over this week’s public hearings on the creation of Ulittaniujalik provincial park in Kangiqsualujjuaq, Kuujjuaq and Kawachikamach, along with Peter Jacobs (right), the president of the Kativik Environmental Quality Commission. (PHOTO BY PASCAL POULIN)

KUUJJUAQ — A surprising criticism cropped up during public hearings on the creation of Nunavik’s fourth park, which took place this week in Kangiqsualujjuaq, Kuujjuaq and Kawachikamach: the park’s future name, Ulittaniujalik, is a tongue-twister to non-Inuit in Quebec.

SNAP in its brief applauds the move to protect 5,272 square kilometres about 120 south of Kangiqsualujjuaq from development by creating a provincial park.

But the non-profit organization doesn’t like the Inuktitut name proposed for the park: Ulittaniujalik, for the 457-metre high Mount Pyramid peak “that looks like it bears a high-water mark” due to lines left by a glacial lake that once covered the area.

The Ulittaniujalik provincial park — or “national” park as Quebec terms the parks in its provincial network of parks — will join Pingualuit park near Kangisujuaq, Kuurujuaq park in the Torngat mountains and Tuqsujuq park — still a park project — around the Richmond Gulf.

For the moment, the park project’s official name remains the French-language “project de parc national des Monts-Pyramides” — a tongue-twister of its own for non-Francophones in Nunavik.

The municipalities and landholding corporations of Kangiqsualujjuaq and Kuujjuaq as well as the Naskapi of Kawachikamach have already given their support to the name Ulittaniujalik. Quebec’s Department of Sustainable Development, Environment and Parks plans to make a formal request to Quebec’s Commission de toponymie du Québec, the public body responsible for managing Quebec place names, to change the future park’s name from “parc national des Monts-Pyramides” to Ulittaniujalik.

“Provincial parks in Nunavik are always called by their Inuit names, a noteworthy practice that reflects the long presence of Inuit in the region,” SNAP acknowledges in its brief, written in French and dated Nov. 16.

SNAP says Ulittaniujalik reflects the features of the mountain and “seems to have gained everyone’s approval.”

But Ulittaniujalik “has the disadvantage of being long, with six syllables instead of three for all the other parks.”

SNAP says Ulittaniujalik is “hard to pronounce, or even memorize for people who are unfamiliar with Inuktitut.”

“Without putting into question the choice of the name Ulittaniujalik, it could be interesting when the next northern parks are created to favour names which are more accessible to people who aren’t familiar with Inuktitut,” SNAP says.

This could help make people in southern Quebec more aware of the “beauty and attractions” of Nunavik parks, SNAP suggests.

SNAP makes a recommendation in its brief that “to facilitate knowledge about Nunavik parks among the general population” that future Nunavik park names in Inuktitut [should] contain no more than three or four syllables.

Earlier this week, Quebec released its grand plan for tourism in northern Quebec.