“We cook, we laugh, we cry together, and we have a good time” 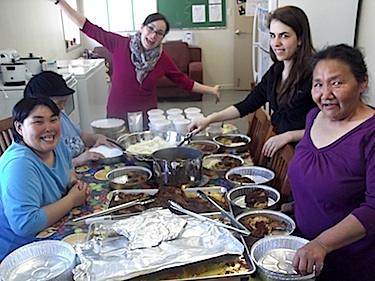 Alicia Argutak, in back, and others at the Igavik Club in Umiujaq prepare portions of food which are sold for $2 a portion. (PHOTO COURTESY OF IGAVIK CLUB) 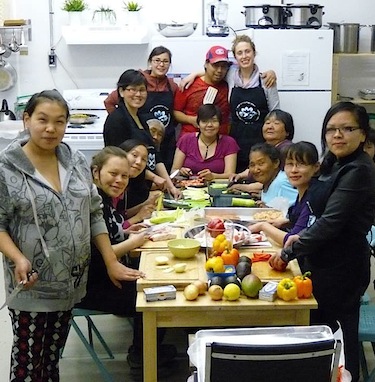 Members of the Igavik Club sit around the table in their new kitchen at the Umiujaq research station. (PHOTO COURTESY OF THE IGAVIK CLUB)

In Umiujaq, a small community of about 400 on Nunavik’s eastern Hudson Bay coast, people have eaten well over the past year, enjoying home-cooked, tasty — and inexpensive — food several nights a week.

That’s due to the Igavik Club, a collective kitchen, where three days a week women of all ages, and sometimes men, get together to cook.

And, as they cook, they have fun and talk, while they make their families healthy, affordable food and have a positive impact on the entire community’s well-being.

Last week was barbecue week at the Igavik Club — and if you had been in Umiujaq then, you could have sampled chicken brochettes and marinated pork chops.

June 6 was “sushi” day, when members of the club — which is open to anyone — made sushi with salmon, crab, shrimp, strawberries, cream cheese, mushrooms and “all the vegetables we could get at the co-op,” said Alicia Aragutak, one of the kitchen’s two co-ordinators.

“You name it we had it,” Aragutak said in a recent interview from Umiujaq.

For sushi, the kitchen attracted the largest group it has seen so far this year — 13 cooks.

“Everyone in town was eating sushi,” Aragutak said.

Aragutak, also a town councillor and Kativik Regional Government regional councillor, and Marie-Hélene Morin, a teacher on maternity leave from the Kativik School Board, got the idea for the kitchen-club a couple of years ago from the popular collective kitchens which operate in southern Quebec.

They started getting the Umiujaq kitchen in operation as volunteers — and then around looked for funding so they could keep the kitchen operating.

Now with help from organizations including Makivik Corp., Nunavik’s regional health board and Ungaluk Safer Communities program, they’re able to keep the club going as a project under the Northern Village of Umiujaq.

Every week, the two get together on Monday with the club members to decide what they will cook and then find the recipes.

Then they get cooking in earnest on Tuesday, when two sessions are offered, in the afternoon and again evening for those who can’t come in the afternoons due to work. They continue cooking sessions on Wednesdays and Thursdays.

Everyone pitches in — and when the food is ready, participants take the food home — $2 per portion, which includes an ample serving of a main dish, vegetable, starch and dessert.

“I have lots of children. “It’s a big job for cooking,” one regular Igavik Club cook said during a group interview. “When I go back home [from the club], they are always happy and asking what they’re going to eat. It’s easier for me when I cook at the Igavik Club. Everybody helps, and I’m not doing everything myself. When I go home I have nothing more to do — it’s all cooked”

The club varies the foods on every week’s menu. They also try to get country food, but caribou, for example, is now in short supply.

And now there’s colour on everyone’s plates as club members learn that it’s better to have a variety of foods in every meal, Aragutak said.

Another regular at the kitchen told Nunatsiaq News she doesn’t mind paying $2 per portion for food made at the club.

“I have a good supper every time I go to it. If people buy fast food, it costs a lot, [so] if we cook vegetables, healthy foods, it’s better.”

Even for five portions, people save money, Aragutak said.

“Our portions at Igavik Club aren’t small, and they come with a dessert. So if you have five people at your house, and you want to bring home five portions, that’s $10.”

Another enthusiastic cook agrees the club helps her to save money and eat healthy foods — “and we can teach our kids how to have a future and save money.”

Anyone who comes to the kitchen also sees his or her name put into a draw for a weekly $100 “shopping spree — of only healthy foods,” Aragutak said.

And Aragutak and Morin also visit the local school where they work with students on cooking and nutrition-related activities.

The kitchen-club also works with social services and will help a family in need or bring elders extra food.

From now until August, the Igavik Club is taking a break but still plans to hold occasional cooking sessions.

Plans for the future include a cookbook of favourite recipes, which would include recipes for many baked goods as well as favourite main dishes such as baked chicken breasts and meatballs.

But a collective kitchen needs to be local program, that gets support and is locally-directed.

It’s important to have a good space to use, they say.

After moving several times around town, the Igavik Club finally has a home in the research station owned by Centre des études nordiques of Université Laval.

When Aragutak and Morin first got together to cook, they used to do it for fun and wanted to expand the kitchen because many people in Umiujaq were going hungry — and a collective kitchen looked like a good way to improve food security.

“Now I think people enjoy it because we can go and there’s no judgment,” said Morin. “We’re just cooking, frying. It breaks the isolation. We cook, we laugh, we cry together, and we have a good time.”

As well, as Aragutak puts it, there’s “not a lot to do in Umiujaq” so the kitchen is a regular “hot spot” of activity.

Aragutak had been away from the community to study.

Having the club also made a big difference to her, she said.

“I feel more connected to my town and people in it — and you feel a sense of belonging.”

“It helps more than we think,” Aragutak said.