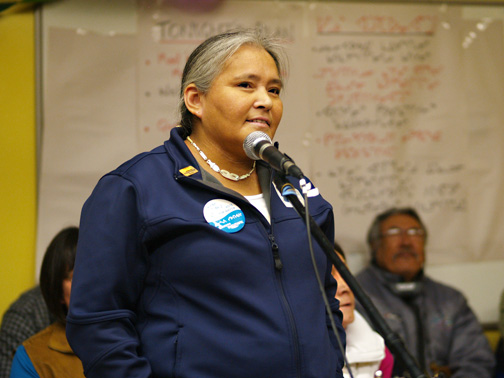 Elisapee Sheutiapik, seeking a third term as Iqaluit’s mayor, speaks during an all-candidates meeting at the Francophone Centre Thursday. (PHOTO BY CHRIS WINDEYER) 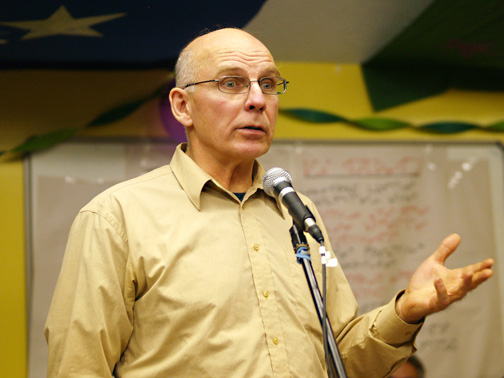 Jim Little, a challenger for mayor in Iqaluit’s civic elections, makes his pitch to voters. (PHOTO BY CHRIS WINDEYER)

There were nearly as many candidates as voters at a hastily-assembled forum for Iqaluit’s mayoral and council hopefuls held at the Francophone Centre Thursday.

Both mayoral candidates and 14 of 21 council candidates made last-minute pitches ahead of Monday’s civic elections.

Council candidates had one minute to answer two randomly drawn questions each, while mayoral candidates each answered one question and had two minutes at the end to make their pitches.

The audience-submitted questions focused on the city’s seemingly endless garbage management problems, the long-awaited recreation centre, transparency at city hall and ways to reduce the share of revenue the city takes in from Iqaluit’s 700 homeowners.

The debate was part of an annual general meeting held by the ratepayers group, the Namminiq Angirraliit Iqalunni Association.

On the city’s litter problem Jim Little, who’s challenging Elisapee Sheutiapik for the mayor’s job, said the city needs to expand the number of garbage cans around the city, and show leadership by cleaning up its own messes better.

“We all need to be educated as to how to conduct ourselves in a city,” he said.

Speaking on transparency, Sheutiapik acknowledged the city needs to work harder to communicate with Iqalummiut, and left the door open to televising council meetings.

In the meantime, she urged residents to speak up with their concerns and to show up for council meetings, which are open to the public but rarely attended by the general public.

“If you want to go [to council], there’s no reason you can’t come and watch us,” Sheutiapik said.

Other highlights included:
• Claude Martel, seeking a second term on council, saying he has no opinion on ways to beautify the city. “It’s for other people, I think.”
• Council hopeful Romeyn Stevenson supporting the idea of a vehicle tax to defray the city’s cost for disposing of cars, trucks, snowmobiles and ATVs.
• Former councillor Nancy Gillis defending the controversial wooden posts along major city roads. The problem, she said, is that the city hasn’t installed enough walkways to accompany the posts.

Election day is Monday, Oct. 19. Polls are open from 10 a.m. to 7 p.m. at the Cadet Hall and Abe Okpik Hall in Apex. Kirt Ejesiak, the city’s chief returning officer, urged voters to cast ballots early in the day.